From Our Schools: Humans of Danville Project

Humans of Danville is a project that Danville High School Journalism class is undertaking in order to discover the interesting, extravagant and odd lives of the people that surround us. To do this, students are interviewing people throughout the community and taking snapshots from the slice of their everyday life through pictures and stories. These quotes were collected by Joseph Lay, Hunter Buntain and Olga Bettoni. 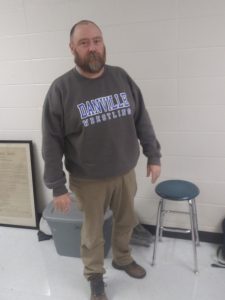 “I am a Danville High School graduate and have been a teacher at Danville High School for the last 15 years. I originally didn’t want to be a teacher. I was not one of the kids in my graduating class that people thought would go to college. And then I did and I wanted a history degree and my dad was like, ‘What’s the point of a history degree if you are not going to teach?’ And I didn’t have an answer, so I went back to college for a year to get a teaching certificate.

“Outside of Danville High School I have been married for 25 years. I have four children and one grandchild. I love dogs. I have two bull dogs at home and a cat who hates me. I enjoy reading and spending time with my family. My favorite authors are Terry C. Johnston and H. W. Brands and my favorite genre is historical fiction.

Outside of teaching and my family, I am the current wrestling coach at Danville High School. I have loved wrestling since I first got into it in the seventh grade because my neighbor at the time wrestled for the team and I want to try it out so I joined and really enjoyed it. And That’s kinda me. Nothing too exciting.” 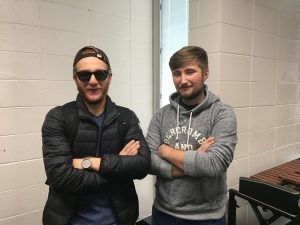 “I was going to do gym class instead of band class in sixth grade, ‘cause I thought band would be lame and I ended up taking it. Been in it ever since, so … yeah.

“What keeps me going? Just being alive, man. Like, you not realizing that it’s just another day and things go on, you know?

“Well, I met Lan in 7th grade in a speech class, I believe it was, and I told him he should join band. We played GTA that whole day.

“That’s how I met him. We played Grand Theft Auto. Then we became friends.”

“I was born in 1980 in Lexington, where I lived most of my life, went to UK and had the opportunity to live abroad twice. I went to Manchester and did my graduate there and Barcelona for a year. I was in a nonprofit for a while, like six to seven years after school, and then I decided that it didn’t pay enough, so I got my education degree and then I started teaching.

“And Danville had a job, so I interviewed for and they called me the next day and I accepted, so that’s how I happened in Danville. Even if that’s just my second year teaching (I’m way late), I like the relationship with kids, helping disadvantaged populations and people who have a tough life.

“… I don’t have lots of friends, but that’s my choice; I definitely like my solitude. I like travelling, reading, writing, staying with my family, watching basketball and soccer. Manchester United is mine! And then I love my dog, Loretta, she’s a pitbull. I hate when she’s not with me and she definitely hates when I’m not with her.”