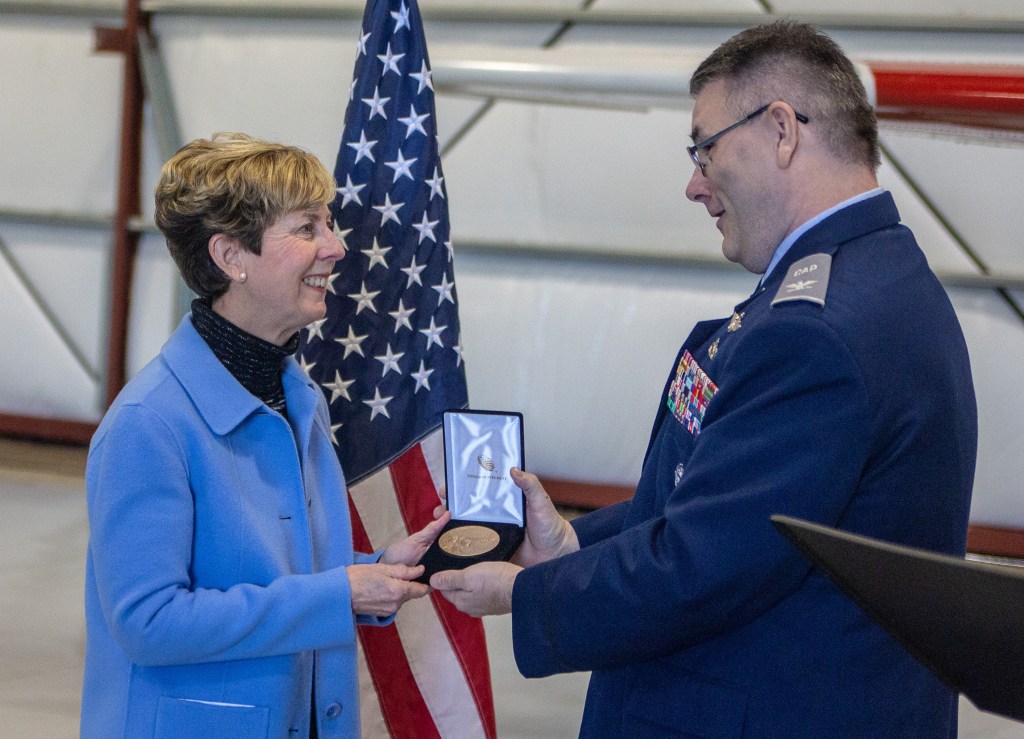 Stuart Powell, the guiding force behind today’s Danville-Boyle County Airport, has been honored posthumously with the highest honor the U.S. bestows on a civilian — the Congressional Gold Medal. 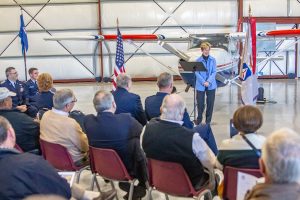 His daughter, Patti Powell accepted the award Sunday, during a ceremony at the airport run by the Stuart Powell Civil Air Patrol Cadet Squadron No. 122.

“So many people think of Dad and aviation and the airport, and certainly all of the growth and corporate hangars … but truly his love (of aviation) started long before that,” Patti Powell said while accepting her father’s medal from Col. Darrel Williamson, Kentucky wing commander for the Civil Air Patrol. “It really was as a child. … He came out here and it was just an air strip at that time, and he pumped gas and cleaned windshields and learned to fly in a J3 Cub. And he flew probably more than he should have, but that’s beside the point.”

Stuart Powell, who died a little more than two years ago in 2017, was awarded the Congressional Gold Medal this week. But he actually earned it more than 75 years ago, when he served as a cadet in the Civil Air Patrol during World War II.

Congress has authorized awarding the medal to Civil Air Patrol cadets who served during WWII because of the substantial contributions those cadets made to the war effort, said 1st Lt. Nick Birt, Kentucky wing director of cadet programs and a leader of the local Stuart Powell cadet squadron. 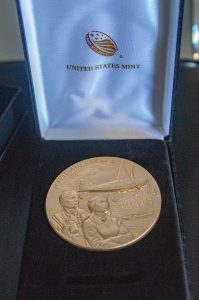 The Congressional Gold Medal awarded to Stuart Powell sits inside a case. (Photo by Ben Kleppinger)

But to actually receive the medal, documentation is required, Williamson explained. It was Patti Powell who eventually found a letter, dated two weeks before the end of the war, that provided hard evidence her father had been a cadet.

“We knew Stuart was a cadet, but we needed proof,” Williamson said, telling the story of when Patti Powell called him and told him what she had found. “I was like, ‘Woo hoo! Look at that! I was so excited — like, finally.”

The ceremony took place in one of the hangars at the airport, and the local squadron’s Cessna 172 was rolled in to serve as the backdrop. The squadron was just given custody of the plane this year — something Williamson said Stuart Powell had not been shy about lobbying him for previously.

“He would go for what his goals were, and he wanted an airplane back here in Danville” for the local Civil Air Patrol squadron, Williamson said. “I’m glad we were able to make that happen.”

During her acceptance speech, Patti Powell said even though her dad didn’t get to see the plane given to the squadron that bears his name while he was alive, she’s sure he approves.

“I know dad is smiling down and giving it a thumbs up,” she said. 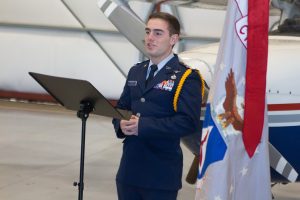 Cadet Col. Ryan Hebert, an accomplished member of the local squadron who has been named the National Cadet of the Year, said Stuart Powell “was imbued with the highest ideals of what every citizen should aspire to be.”

“During World War II, Mr. Powell along with other courageous citizens joined the Civil Air Patrol to rise to the occasion when they saw our nation was in need,” Hebert said. “After the war, his passion for serving his community, state and nation did not subside. He went on to become the heart and soul of Danville, Kentucky.”

When the local squadron got off the ground three years ago, “we were looking for something or someone to rally behind that would inspire and develop the character of those in our squadron,” Hebert said. “In Mr. Powell, we found all those things and more.” 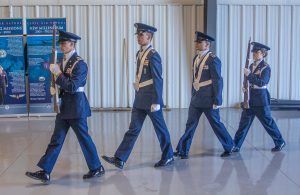 “We could never hope to repay the priceless contributions and service that Mr. Powell gave to this community. So we wear the patch that bears his name as a badge of honor. Mr. Powell’s passion for Danville, Kentucky, lives on in the squadron, and we vow to keep that torch burning.”

Williamson said he’s received many requests over the years to rename a Civil Air Patrol squadron after an individual, but he has never granted any of those requests — except for Stuart Powell.

In the other cases, Williamson said the people the squadrons were asking to be named after would eventually be forgotten and the name would lose significance. 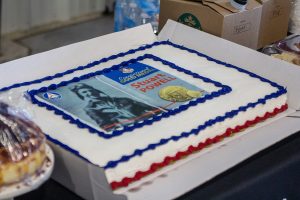 During her acceptance speech, Patti Powell said everything her father did to help grow the Danville-Boyle County Airport into the regional hub it is today stemmed from what he learned as a young man in the Civil Air Patrol.

“The qualities of honor and respect and leadership — they are all the qualities we need in our world today, and these young people all exhibit (those),” she said. “… We live in a wonderful place with so much opportunity. And we have a lot to be thankful for. And it is Thanksgiving, so let’s all give thanks.”