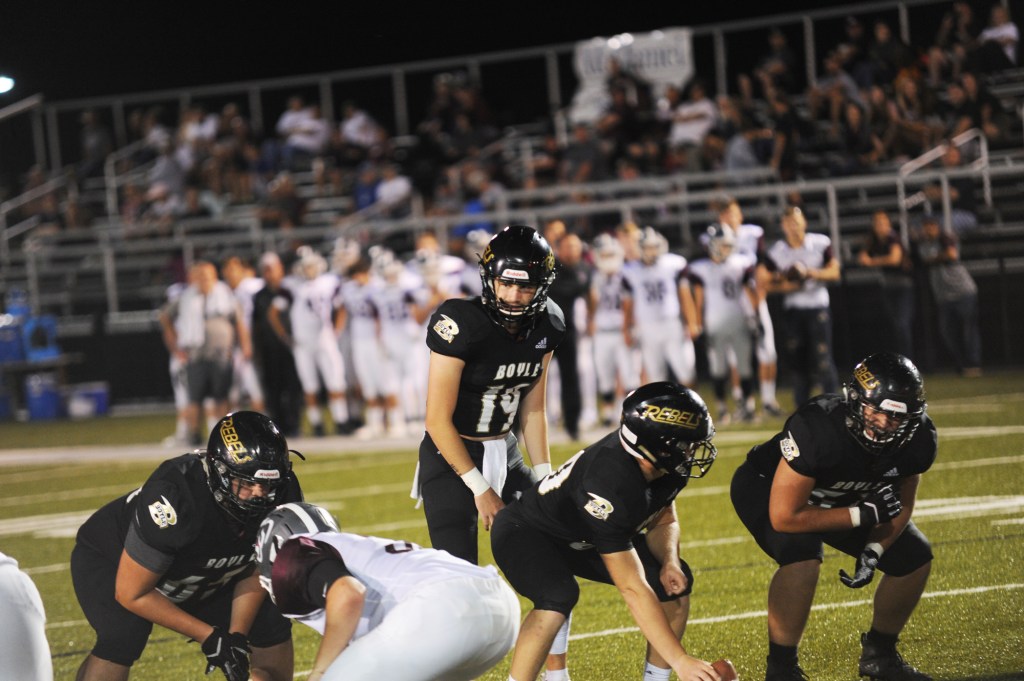 Reed Lanter has stepped up as the unquestioned on leader on the field for the Rebels this year. (Photo Derek Brightwell)

ABC’s The Wide World of Sports introduced the world to the phrase “The thrill of victory and the agony of defeat”. In the 40 years since that show aired, perhaps nobody has embodied that phrase more than Boyle County quarterback Reed Lanter.

In his sophomore season — the first year he was the starter for the Rebels — he led his team to a state championship. That season, the Rebels lost only one game — to crosstown rival Danville who went undefeated and won a state title of their own.

In his junior season, it looked like he and the Rebels would run the table and bring home a second straight state title. But that wouldn’t be the story. Lanter would complete 19 of his 27 attempts with no touchdowns and an interception as Corbin shut out the dynamic offense and ended Boyle’s season.

“Last year was rough. I weighed 175 pounds on the first game, and by the Corbin game I was down to 150,” Lanter said about the game. “I had a stomach bug, I had the flu — during the Corbin game I had an IV in my arm during halftime because I’d lost eight pounds that week.”

After that game, Lanter went through something of a crisis that saw him uncertain of what his future would hold. 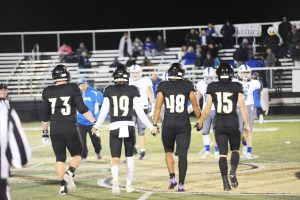 Lanter said he talked with “everyone he needed to” in the offseason, including teammates like Reese Smith (15). (Photo Derek Brightwell)

“My dad and I stayed up many nights crying trying to figure out what we were going to do,” Lanter said about the offseason. “There was a lot of outside pressure — some of it was I expected to be great. I had colleges looking at me, the coaches breathing down my neck. There’s a lot of pressure being the quarterback and especially at a school as good as we are. I was not good mentally. I had anxiety real bad. I wouldn’t say I was depressed, but I wasn’t finding the joy in things that I used to.”

Lanter said that he took the offseason to get himself back to where he needed to be and that conversations he had with his teammates and former Boyle players — including former quarterback Josiah Robbins — were important to that process.

“Last year when I was going through all that, they were always there,” he said about his teammates. “Even in the offseason, they were there. ‘Whatever you want to do, we’re going to love you either way.’ I didn’t get any peer pressure. It was my decision on what I wanted to do. I just felt like I needed to be there for them.

“I was trying to figure out what the problem was. It all came back to football,” he added. “I just had to put everything into God’s hands and let it work out. That’s the change this year. I’m not worrying about colleges — all I’m worried about is winning a state championship and everything else will work out.”

To say that it’s worked out would be a massive understatement.

Lanter is the leader of the most potent offense in the state, averaging over 50 points per game. Individually, he’s thrown for 2,790 yards and 37 touchdowns with only two interceptions. And his completion percentage of 74 percent is challenging for the second best mark all time in the state.

“He’s always thrown a great ball, a real catchable ball with touch on it — but he’s gotten so much better with his leadership skills and his ability to see the defense and know where to go pre-snap and even make some checks in a game and get us in the right play without us having to change it from the sideline,” he said. “He’s really elevated his game this year and it’s showing on the field. It’s showing with stats and yardage and completions. I’m really proud of him and he’s doing a great job.”

Reese Smith — Lanter’s best friend from childhood — has seen the difference as well.

“You can tell by the way he walks on the field,” the receiver said. “He has a lot more confidence in himself. Coach (Chris) Pardue’s been letting him — if he sees something on the field he can change the play or make an adjustment. He’s got that green light now. He plays with a chip on his shoulder. He’s going to do what it takes to win games and put us in good situations.”

Lanter credits Pardue with pushing him to be a leader this year.

“(He) came up to me and said ‘You don’t have to be vocal, but we need you to be more of a leader this year,’” Lanter recalled. “He also said that I needed to check out of plays. I wasn’t really good at it last year. I didn’t set us up for failure, but I wasn’t helping us either. So he said that if they could get those two things out of me then everything else will take care of itself. I’ve worked on it and rolled with it and it’s been working out so far.”

Lanter said that his path always led to the football field for his senior year and that he couldn’t imagine a scenario where he wasn’t under center on Friday nights. His success on the field this year, he says, has given him some validation of everything he was doubting in the offseason.

“It’s some clarity. This year’s been a lot of fun,” he said. “Outside of the awards and stuff — I haven’t taken for granted the time I’ve gotten to spend with everybody. I’ve met so many people through football, it’s a blessing.” 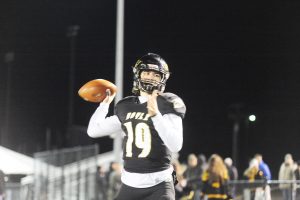 Lanter has become as decorated as any QB in Boyle history, setting the school record for career passing yards earlier this season. (Photo Derek Brightwell)

Earlier this year, Lanter set the school record for most passing yards in a career — a feat that he said was humbling to be in the same conversation with the great quarterbacks that have come through the halls of Boyle County. And while he’s quick to defer a lot of that credit to his teammates and coaching staff, Reese Smith is equally as quick to praise his friend.

“Reed’s going to put it on the money every time. And even when he misses, it’s very close,” he said. “I think he’s the best quarterback in the state and that’s not coming from playing with him. It comes from watching him every day and seeing how he’s progressed. Running routes is so easy because you know the ball is going to be there and it’s going to be out quick.”

And just in case you were worried that a player and team that have accomplished as much as Lanter and Boyle has would get complacent, there are plenty of things that keep them humbled and it starts on the sidelines with coach Smith.

“He doesn’t let up. It doesn’t matter how good we’re playing, he expects perfection. I wouldn’t have it any other way,” Lanter said about the legendary coach. “If we had any other coach in the state, we wouldn’t be as good as we are now. Sometimes our class does need that because we think we’re good. He does a good job of keeping us grounded and he always wants more out of us.”

Another thing that has kept this team focused is the end of last season.

“We have a chip on our shoulder,” Lanter said matter of factly. “I remember on the way back from the Corbin game, (senior receiver) Reiley Colwick putting on our group chat ‘Next year’s going to be a movie. We’re going to write our own story.’ From that moment on we took it and ran with it. We feel like it’s our destiny to win a state championship.

“Playing at Boyle if you don’t win a state championship then you’re not successful,” he added. “We always thought we’d win our junior and senior years. It didn’t happen for us last year but it did happen our sophomore year. We do feel like it’d be a let down if we don’t win it this year. We’d feel like we were an overhyped class. Everybody talks about how a good of a class we were, but if we don’t win state then we weren’t.”

And for Lanter, personally, one last thing has kept him motivated: being overlooked by colleges.

Despite being one of the most prolific passers in the state and the quarterback of the best offense in the state, Lanter isn’t getting the college looks as other signal callers. In the two matchups against Lexington Catholic and quarterback Beau Allen — who is committed to UK — Lanter went in looking to prove he was the best QB on the field, and did it.

“I feel overlooked. I don’t think a few inches and pounds should determine where I go to college because I can throw a football just as good as anybody,” he said. “I can win football games and I feel like that’s the most important thing. I feel like colleges get too focused on size instead of the intangibles.”

“I totally agree with that,” Reese Smith said. “I don’t think he was being arrogant — I think he’s telling the truth… He might not be the biggest guy on the field — but he’s got that chip. He’s got a heart that can play at the next level. You just can’t teach that.

“Nowadays you can get overlooked if you’re not the right size or whatever. Whoever lands him is going to be lucky and I know he’s going to put on a show wherever he goes.”

“I do feel disrespected but at the same time I’m going to end up where I end up so I don’t worry about it anymore,” Lanter said.

Lanter and the Rebels continue the mission Friday night when they welcome last year’s Class 3A state champion Central to Rebel Stadium.