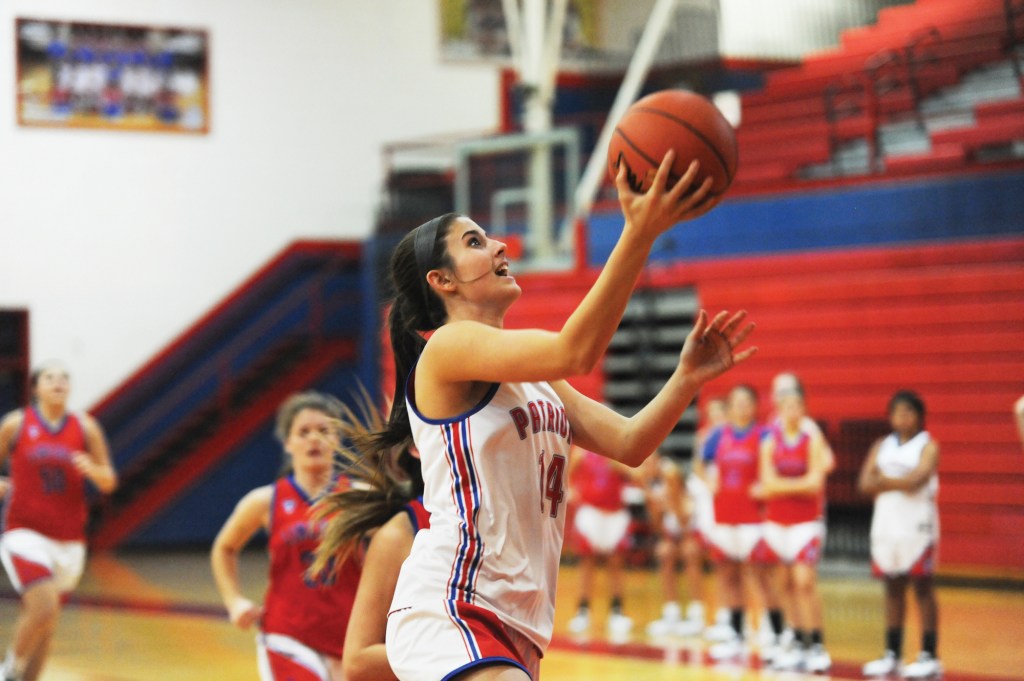 Senior Trinity Shearer is the only returning starter for the Lady Pats this year. (Photo Derek Brightwell)

The 2018-19 Lady Patriots were as loaded as any team could hope to be, but fell short of their goals after losing in the semifinals of the regional tournament to Southwestern.

“You look at last year’s class — we’ve definitely lost a lot. We had five seniors who are all playing in college,” head coach Cassandra McWhorter said. “Obviously Emma (King) being at the highest level at UK but college basketball is college basketball and all five seniors are there playing it now. That’s a lot to lose at one time. We had a little bit of disappointment where the season ended last year. I’m really excited about this year’s team.”

That returning talent starts with senior Trinity Shearer, who is the only returning starter from the team a year ago.

“She started with four of the seniors last year. She’s played with them since they were in third and fourth grade,” McWhorter said about the senior. “She’s going to be the leader as far as how to play and how hard you have to practice to be at that level and caliber.”

While they may lack the star power up top like a year ago, McWhorter likes the depth that she has coming back this year, and believes the experience of practicing with that class last year will benefit them this year.

“Everybody knows what we lost, but I’m not sure they know what we have back,” she said. “They know from watching them girls the effort it takes. The more games we start playing and get under our belt rolling into late in the year and tournament — I feel like they’ll be ready.”

One of those players is junior Haleigh Releford, who a sharpshooter that McWhorter said can be dangerous when she gets hot.

“In our last scrimmage she didn’t have a great first half, but came out in the third quarter and scored 16. So she can heat up very quickly,” she said.
In addition to Shearer, the Lady Pats have two other seniors — Hailee Reed and Lydia Rice — that coach McWhorter is looking to for big minutes and leadership.

“(Reed’s)a hustler and a grit player. She’s undersized but she’s going to give it everything she’s got when she’s on the floor,” McWhorter said. “She crashes the boards and rebounds well. Lydia is learning to play more physical how we need her to.”

McWhorter said she didn’t want to start listing all the players on the team she’s looking forward to seeing step up this year because she would end up listing the whole team and didn’t want to forget any names.

“When you can play 10-12 — I told the kids last week I’m looking to go all the way down the bench 15 deep,” she said. “When you can do that and they don’t worry about who’s scoring and who’s on and whose name gets in the paper they’re really special in that way. They care about one another and are friends off the floor as well as on. That’s when really special things can happen and that’s what I’m excited about with this group.

While the talk about Lincoln around the region this year is on what they lost — something McWhorter doesn’t focus on — the name on the front of the jersey is still a target for a lot of teams looking to make a statement win. That’s something that gives a weird dynamic to the Lady Patriots — the hunger of feeling overlooked in the region while also being a premier program that everyone wants to beat.

“Our kids know — Spencer County on Thursday was a good example. Their coach told me that they wanted to jump on a chance to play us because we’re an established program,” the coach said. “That means a lot and is humbling that we have that respect not just in our region but across the state. We got the chance to talk about it last week that just because everyone knows what we lost and we feel overlooked, they’ve got that hunger side going because they want to prove people wrong — when they put that uniform on and it says Lincoln, they’ve got the target on them. Other teams don’t care what we lost — if you can say you beat Lincoln it still means something. Maybe more than our kids realize.”

“Lincoln’s Lincoln. Lincoln’s always going to be good. They just reload,” she said. “They play from the time they’re real young and they stay together so you can’t count Lincoln out. As a coach, a lot of times when you think you’ll be real good — last year for them was a disappointment — they may win this year because they’re not expecting it.”

For McWhorter, though, she just wants her kids to go out and play.

“You put your uniform on and tied your shoes now lets get out there and go.”

What does McWhorter think fans can expect the 2019-20 Lady Pats to be?

“Shocking,” she said after a pause to think about it. “They feel underestimated. They feel they’ve been overlooked. This season they’re going to shock some people. We might take some lumps and learn a little bit. But as this season progresses, as long as we stay together as a unit and they stay the unselfish individuals they are, they’re going to make our team stronger and we can stay in the mix come tournament time.”