Antiques: Jacqueline Kennedy estate auction catalog was a steal at $2 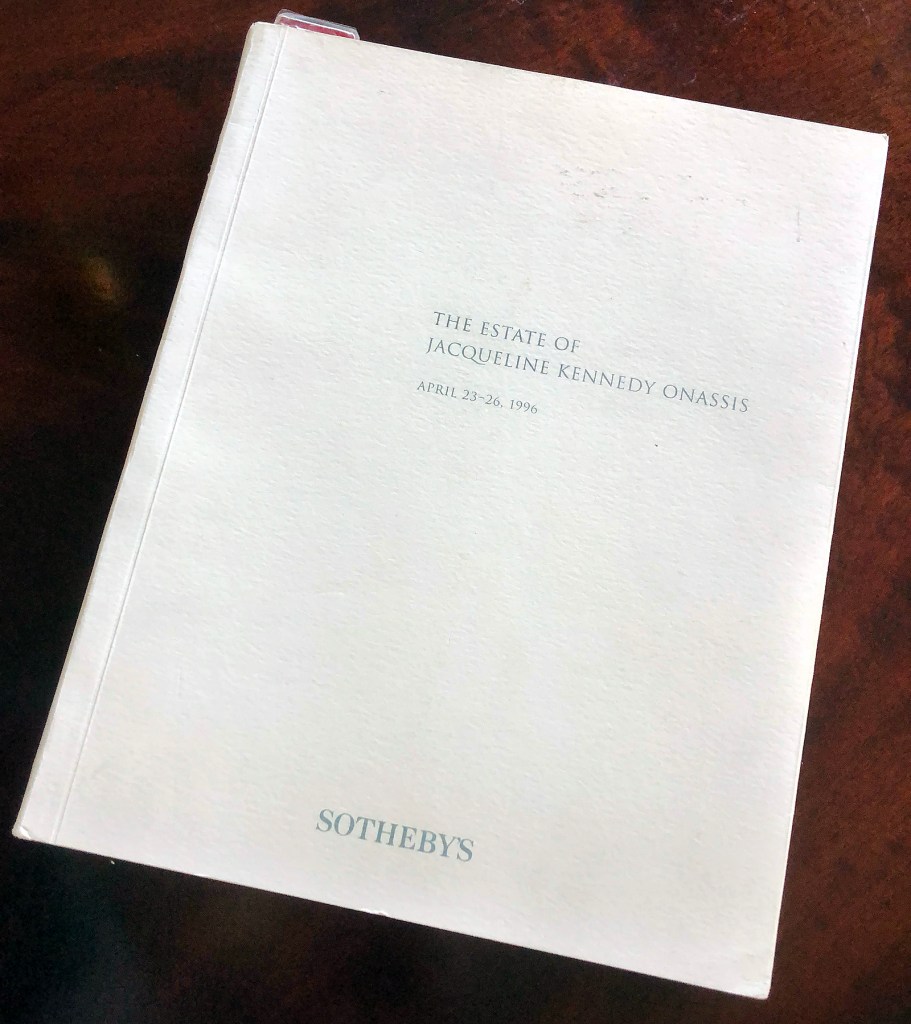 Question: Jerry, I recently found what I think is a treasure at a book sale. I paid $2 for it. The book is the glossy, 583-page Sotheby’s catalog for Jacquelin Kennedy’s estate auction in 1996. The hardcover edition was $90, but mine is the $45 softcover edition, which must weigh at least five pounds.

It is in pristine condition except for a pale smudge on the cover. It is full of mouth-watering color photographs and stories about the family, the White House, and the items being auctioned. There are pictures of her dishes, art work, gorgeous jewelry and furniture. I am so disappointed that I couldn’t have been at the auction! According to price estimates, there were many, many smaller items I could have afforded. Of course I don’t know what they actually went for. Lots of dishes and other small items were estimated to sell from $50-$200. What is my catalog worth now and what were the results of the sale?

Answer: Yes, it is a fabulous auction catalog. I own one too. The spell of Camelot will wind in and out of our lives for generations to come. People clamored for a bit of history from the political dynasty. It was said that Sotheby’s didn’t create and propel this auction; it was the grace, elegance and poise of one of the most popular First Ladies in the history of our country. Like many auctions, this sale had glimpses of her life from iconic works of art and photography to dinner plates, items from her Presidential husband, jewelry, dinnerware, books and the things that make a house, a home. And everyone wanted a piece of it. Initially, Sotheby’s had the entire estate estimated at $4.6 million. That’s not how it ended.

Let’s talk about your catalog first. You’re right, it’s a tome with 593 pages of text and color and black and white photos. Its cream colored cover is elegant but easily stained. So being yours is in good condition is an added plus. Sorry, that you don’t have the end values or the results. Don’t feel bad I don’t have them in mine either. I checked on Sotheby’s website but it’s no longer available. But, I can fill you in on some of the highlights, later.

I’ve found that in most cases these catalogs with the prices realized list, sells for about $30-$50 — slightly less if the addendum isn’t present. So, for an investment of $2 you did very well.

In a nutshell, sales for this auction went through the roof. Remember, I said that Sotheby’s had an estimate of $4.6 million? Well, at the final hammer blow the estate had netted well over $34 MILLION! It was crazy! The famous triple strand of faux pearls, captured in a photograph showing Jackie holding John John as a toddler, with John pulling at his mother’s beads carried an estimate of $500-$700 but sold for over $200,000!

The cigar humidor that was owned and used by President Kennedy carried a paltry estimate of $2,000-$2,500 and sold for a numbing $511,000. The sale carried on that way for all four days of the sale. I imagine there were many people there who didn’t get anything.

Will those prices remain steady and true when sold in the future? Who knows? Celebrity ownership can be a tricky rope to walk on. We’ll have to wait for these things to surface again. Thanks for a great question and enjoy your catalog.