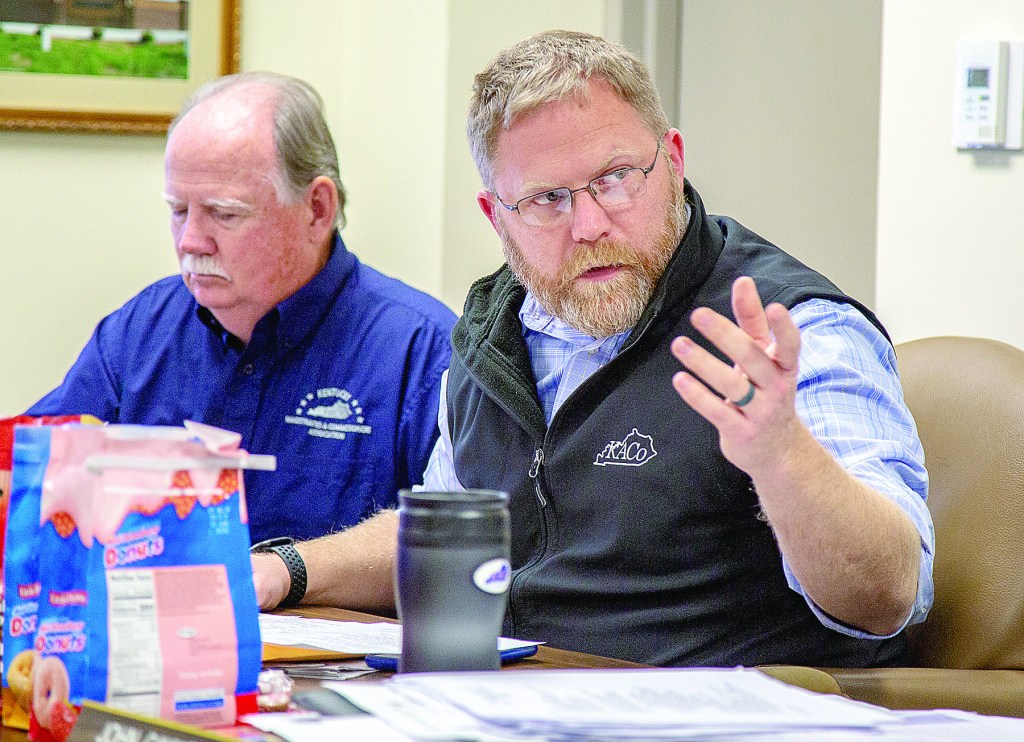 Boyle County Magistrate Jason Cullen, seen in a photo from a November meeting, alleged Tuesday that reporting on the county's plan to increase its payroll and net profits taxes had been "a little unfair." (File photo by Ben Kleppinger)

Boyle County Magistrate Jason Cullen alleged Tuesday that reporting on the county’s plan to increase its payroll and net profits taxes had been “a little unfair.”

Cullen said The Advocate-Messenger did not include in its story about the first reading of the tax increases one specific fact: “Boyle County has not increased its occupational tax in 15 years.” Magistrates brought that up a lot before moving ahead with the increases, but it wasn’t in the newspaper’s story, he said.

“If I missed that part in the story, I apologize, but I think it was kind of a little misrepresenting because I know this court has tried really hard not to increase taxes, and it did it for 15 years,” Cullen said. “So it needs to be known that this was not something done on a whim. And I would just like to make sure that when stuff is getting reported, it’s reported accurately and fairly.”

Magistrates voted 5-1 to pass first reading of the tax increases on Nov. 12. Cullen was the only one to vote against the measure.

If the increases pass a second reading scheduled for Monday, Dec. 9, Boyle County would begin taking 1.25% in payroll taxes out of workers’ paychecks; and 1.25% in net profits taxes from profits reported by Boyle County businesses. Currently, both tax rates are 0.75%.

The Advocate-Messenger first reported on the proposed tax increases in its Nov. 13 issue; it did not address how long or short a time it had been since the last payroll tax increase.

The increases are expected to generate an additional $2.75 million in payroll taxes and $450,000 in net profits taxes annually, according to Boyle County Treasurer Mary Conley.

The increases are planned to help cover growing costs over the next nine years, including an increasing pension bill from the state and an expected bond issue to build a new jail. Magistrates opted for a 0.5% increase over a 0.25% increase based on a 15-year budget projection from Conley.

The increases are being pushed through now to beat a Jan. 1 deadline, when Boyle County is expected to effectively lose the ability to raise its payroll tax in the future. That’s because the 2020 Census should show Boyle County has grown beyond 30,000 people, and a state law effectively prevents counties of that size from increasing payroll taxes.

Also during Tuesday’s fiscal court meeting, Magistrate John Caywood said he, Conley and Magistrate Tom Ellis met with local industry leaders on Monday to explain to them the need for an increase in taxes.

“I got two things out of it. One of them was they appreciated the fact that we came and did it,” Caywood said. “This is strange and debatable — I also sense that they kind of gave me the message that we’d rather have it done more often in little snippets rather than a larger one over a long period of time. That is just what I felt.”

“It could be some guidance to the future courts down the road to how that needs to be handled,” Caywood continued. “It’s never fun to do these kinds of things but I got that it’s better to do it in smaller increments.”

This article originally stated incorrectly that Boyle County Treasurer Mary Conley’s 15-year projection of expenses and revenues had not been released. Conley did release the same projection that she provided to Boyle County magistrates.