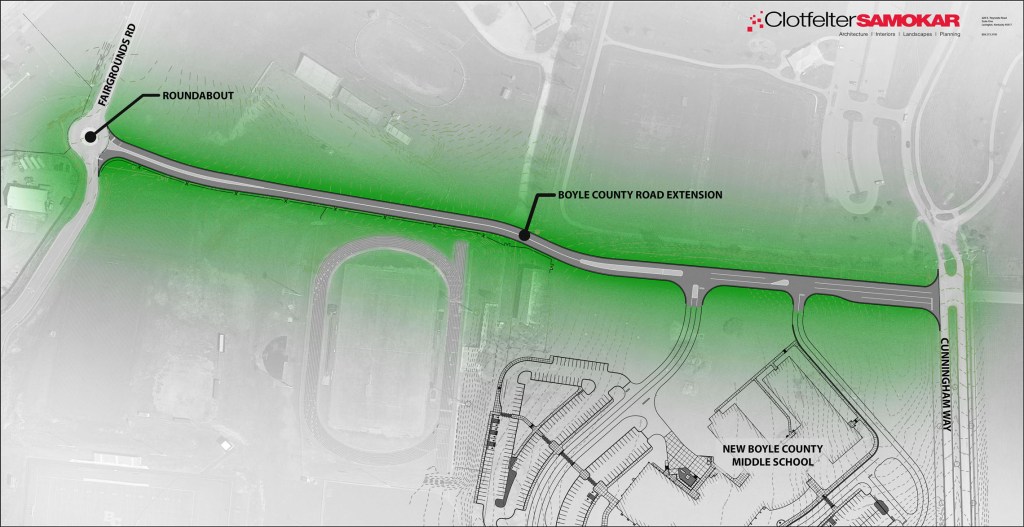 A road rendering, courtesy of the City of Danville, shows where the new connector road will be constructed by Boyle County Schools. The city commission unanimously approved close to $115K in water and electricity upgrades to the area in the old fairgrounds, which it purchased last year.

Monday, Danville City Commission unanimously approved $114,700 worth of work to be done in the area of the connector road Boyle County Schools will be constructing on Cunningham Way.

The road goes through the old fairgrounds, which the city purchased last year. Research done for a Master Parks Plan said many citizens are interested in a family aquatic center, which the city has said could be in future plans for the area.

Last year, the city entered into a property agreement so that the school system may build the road in conjunction with the construction of the new middle school, to connect the existing city street cul-de-sac near the northern entrance to the campus. The roadway will be built to connect the roundabout near the north bypass to Cunningham Way in front of Millennium Park.

“It’s a large cost-savings to the city of Danville, obviously, without having to construct the entire roadway,” Dexter said. He said Boyle County Board of Education accepted the lowest bid, from Earthworks LLC, in the amount of $471,000 to build the road.

Dexter said the city also requested two alternates to the bid be presented during the process, in order to get some things done in the area while construction was going on. The first of which involves relocation of a water line, as well as electrical facilities to the city’s side of the road.

“That would essentially electrify the recently acquired property for the development in conjunction with whatever the city’s Master Park Plan would determine,” Dexter said.

Municipal Utility Engineer Earl Coffey said the existing electrical feed system will not allow for any expansion in the area and will be demolished to make room for the roadway.

He said rather than reinstalling an overhead system, staff suggests installing permanent, underground power to the site during construction of the roadway, rather than doing it later. Coffey said the approach was discussed with Kentucky Utilities staff, “and all concluded this would be the best approach.”

Coffey said the waterline to the area is owned by the county. “The existing line is inadequate, poorly located and is substandard but serves the city property, Whites Park, Animal Shelter and KU.” He said the correct alignment would be parallel to the new road connection from Cunningham Way, allowing “for the city to own the waterline into its property and properly serve customers in the area, including Farm Bureau’s properties, who gets water separately through the Boyle County School facilities.”

The second alternate approved costs $31,000, and will provide for electrical service for underground streetlights along the new roadway, east of the city property, or old fairgrounds. “Overhead streetlights could be installed without the expense. However, the city has invested substantial funds to eliminate overhead power along Cunningham Way and inside Millennium Park. If the commission wishes these lights also be underground, it will be the lowest cost to include the infrastructure during roadway construction,” a memo from Coffey says.

Wednesday, Coffey said the work is being done because the property has “sub-standard power — power to support practical development — currently. The power, at the suggestion of the utility, is being upgraded now to reduce ultimate cost.” He said there would be a cost either way, whether installing it above or underground, because the electric utility considers it as a “betterment” and would not pay for the move.

“It’s being installed underground because it’s more reliable and consistent with the other utilities installed along Cunningham Way and inside Millennium Park.”

The combined cost of $114,700 for the two alternates was unanimously approved after a motion was made by Commissioner J.H. Atkins. It was seconded by Commissioner Rick Serres, who said the project will benefit the city “as we expand Millennium Park.”

Dexter said the city “can’t make improvements needed after the road is completed without great expense. This would be the most cost-effective manner.”

The city will not bid or perform the work; it will reimburse the school system for the total sum.

Commissioner Atkins voiced a citizen’s concern about the new roadway being planned too close to the park’s entrance.

“The entrance on Cunningham is extremely close to the main entrance to Millennium Park,” Atkins said, explaining that a citizen wanted to know “why it’s so close to that entrance.”

“That would have to be an engineering question,” Dexter said. “But part of which is what land the city owns, quite frankly. (Boyle Schools is) building a roadway on land they own, then will dedicate it to the city for usage by everyone in the community. So, it has to initially be constructed on that land …”

Atkins said he doesn’t have any issues with the road being constructed. “The question raised is that it’s awful close to the entrance way of Millennium Park. And I’m just FYI’ing to our staff that’s a concern that I’ve received.”

Coffey said, “Correct. One — that’s the most direct route. But two, we really didn’t want a roadway splitting inside of campus between two schools. For example, if you moved the roadway in an alternate direction, students — in the morning time, particularly — will cross that road. Now school can close the gates and do what they need to do inside of campus to manipulate traffic in an effective way.”

Coffey said then the city can “maintain this road as open, free and clear during the school day. They can shut the gates and do what they want to after hours; this road can be open and we don’t have miscellaneous traffic crossing through campus.”

Atkins began to say a few words then chuckled. “If you go out and take a look at it, and you drive into Millennium Park or out of Millennium Park when school’s getting started or closing, you’re going to have — they’re really close. I’ve looked at it a couple of times, but … I just wanted to relay the message to you because it’s been brought to my attention … It’s got to be done, I understand that, but it’s close.”