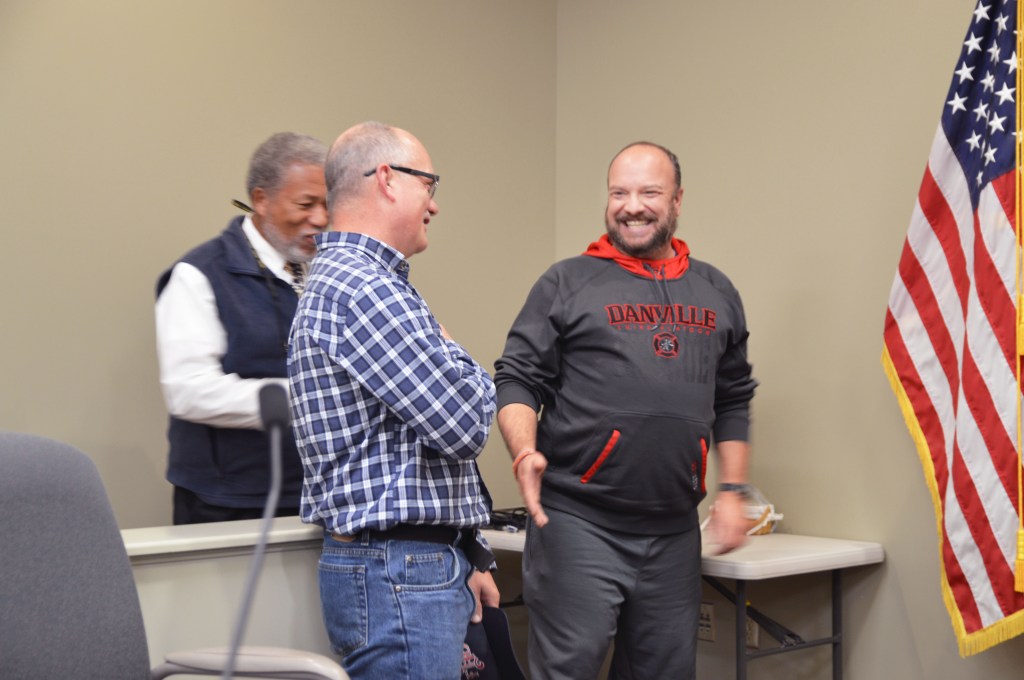 Tim Blakemore, right, jokes with Sammy Young after the two retiring firefighters were asked to lead the Pledge of Allegiance Monday night during the Danville City Commission meeting. (Photo by Bobbie Curd)

As Donna Peek said a final goodbye to her longtime colleagues and friends Monday night, she received two standing ovations and many warm sentiments about her decades’ worth of service. The human resources director recently retired after a 30-year-long career with the City of Danville.

“After 30 years, you finally get a gold watch,” Mayor Mike Perros said as he presented Peek with her parting gift. “On behalf of the city, and commissioners, staff, employees, please accept that for all of your time and energy here.” As Peek received a hug from Perros, the room erupted in applause and cheers.

“I’ve had the pleasure of knowing and working with Donna since 2011,” said City Manager Ron Scott, who took to the podium. “Thirty years is a long time, and in the 11 years I’ve worked with her she has demonstrated a great capacity for being a self-starter, tackling the hard problems that need to be addressed. It’s been a joy to work with her, and she’s a model for all of us to emulate …”

Scott said he suspects the city will have a difficult time replacing Peek and finding a replacement of her caliber. He said Peek is well-respected and it was shown last week by the great turnout during her goodbye luncheon held at city hall. Peek admitted it was overwhelming for her to see all the community members, and former and current city staff who came out to wish her well during the lunch.

“Donna I congratulate you on working with all of us over so many years,” Scott said. “Thank for your service.” 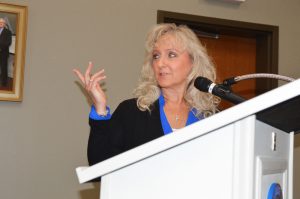 Peek said she’s not big on speeches, but “I just want to say thank you and firstly, that I’m blessed to have been able to be here for 30 years.” She said her husband — former police chief Jeff Peek — retired years ago and has waited patiently for her to do the same.

She acknowledged her son, brother and sister-in-law who were also in the audience. “I appreciate you all being here,” Peek said, taking small pauses to avoid crying.

Peek did have some emphatic parting words for the city commission. “All the people who are workers here — those are the ones that make your city run … I can’t say that enough, that employees are your best asset, I love every single one of them. They’re worth a million bucks, each one of them are. And I hope everybody knows that and everybody realizes that to make things go smoothly in the future.”

She also thanked the city commission for all it had done during her time, and received her third round of applause. As Peek started to turn away from the podium, Commissioner Kevin Caudill said, “Hey, we have some stuff to say, too. Get up here.”

An employee in the audience said, “He can’t tell you what to do — you don’t have to listen to that,” which received an enormous round of laughter. 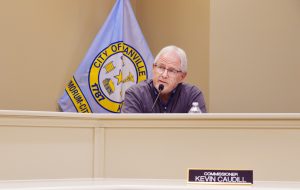 Commissioner Kevin Caudill delivered a heartfelt goodbye to his longtime friend and city colleague, Donna Peek, who retired as the human resources director. Caudill said he wrote his thoughts down because he knew he would get choked up. (Bobbie Curd photo)

Caudill said he had to write his words down because he would “get choked up if I didn’t. Did you know we’ve known each other 35 years?” The two worked together at Danville Office Equipment many years ago, he said, and he quickly discovered Peek is “one of the smartest, most capable, most dedicated and nicest people I’ve ever known. We will always be friends, and for that I will always be grateful.”

Caudill said he thinks it will become quickly evident how much the city will miss Peek. “And how less efficient we’ll be for a while when you’re gone,” but he urged her to enjoy her down time, work on her golf game and spoil her grandkids. “And who knows, we may see you again some time. But may you go now with pride and peace.”

Commissioner Denise Terry also fought back tears, but also told Peek the commission “is ready to put you on a committee whenever you’re ready.”

City Attorney Stephen Dexter closed the sentiments. “When I first began as a wide-eyed, eager counselor for the city, I can’t tell you the manner in which Donna took me under her wing to make me feel comfortable, valued, safe, gave me the chance to lead … I think Donna’s impact can’t be understated. I don’t think the community can fully appreciate, nor can they understand the impact she’s had on hundreds of city employees.

“What Donna was for me, I’m confident she was for every employee in the city. All the good adjectives, Donna is. She’s a champion for the employees. She was a champion for me.”

Dexter ended with a string of adjectives about her, including how committed and “fiercely loyal to the city and all of its employees” she is.

“There’s none better than Donna Peek, and she is the true north star of your staff. So job well done. We love ya, and miss working with you.”

Peek stood quietly to the side smiling while wiping away tears.

Danville Fire Chief Ken Pflug was called to the podium by Perros. “Chief, when it comes to colorful characters, here’s a good one, right here,” the mayor said about Firefighter Sammy Young. Pflug said he’s known Young for 20 years, and that he didn’t have “anything too colorful to tell, but I know my colleague does.” 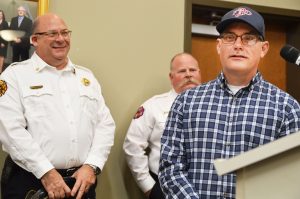 Deputy Chief Tim Brumfield told a story from a few years ago, about a house fire that was called in around 3 or 4 in the morning. He said when he got on scene, a police officer came up to his truck and said, “‘Man, Sammy’s hurt bad.’ … that’s the last thing you want to hear.”

Brumfield said when he made it around the fire truck on the scene, he saw Young standing at the pump handle with “blood just gushing down the side of his face …” Brumfield began chuckling hard, as well as some of the other firefighters, which made the audience laugh.

“You guys on the fire team, y’all tough,” Perros said to more laughter.

Brumfield explained he was actually relieved to see what had happened to Young, that he had hit himself in the head with one of the metal cuffs on the firehose, and that “it’s nothing that’s uncommon in the fire service …”

He said he told Young that as soon as the fire was out, he’d take him to get stitched up. “That just shows the heart and the dedication that he served with.” He said Young was always one of the first firefighters to show up on any scene.

“That just speaks words of the dedication and the heart that he served with. And man, we’re going to miss him, and the Sammy-isms, also. We’re losing a great guy.”

Young received a standing ovation. He said the last 20 years have flown by.

“It’s amazing that I’m able to stand up here and be honored … It is an honor to look out at the public that I’ve protected for the last 20 years,” Young said. “I’ve made a lot of good friends. I know I might not get to see them every third day, but I know they’re just a phone call away.”

Young said he plans to take it easy and spend more time with his family. “It was an honor to do what I did … so thank you.”

Chief Pflug then said Tim Blakemore has “been around a while,” but had been out of service due to an accident. “But your time has now come, it’s time to say goodbye.” 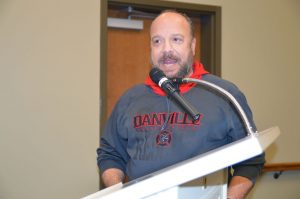 Retired Firefighter Tim Blakemore received many laughs Monday night when he gave his parting words during being honored for 20 years of service to the Danville Fire Department. Blakemore had to leave the job early because he suffered an injury; he said “I like to tell people I gave my left arm to the city, but I’d give my right arm to come back.” (Photo by Bobbie Curd)

Dep. Chief Brumfield said he did have some colorful stories about Blakemore, “but I will not tell them.”

Brumfield said he and Blakemore came on the department at about the same time. He described his colleague as a voice of reason who “could really calm me down,” and someone who’s now become one of his best friends. “Congratulations on this, it’s well deserved.”

Blakemore said 20 years is a long time. “It’s a physically demanding job, it’s a mental job. You have to be physically fit and little more mental to do it,” he joked.

He said he’s seen many changes that have been made over the years. He didn’t write the standard operating procedures; “I was the reason the SOPs were written,” Blakemore said, to much laughter.

“It has been fun, I’ve made a lot of friends … a lot of memories … Like chief said I had an injury. I like to say I gave my left arm to the city, but I’d give my right arm to come back.”

Both men were given collector knives as parting gifts, and a reception was held outside of the meeting room.