Looking Back: Danville man thanks his father in letter from WWI 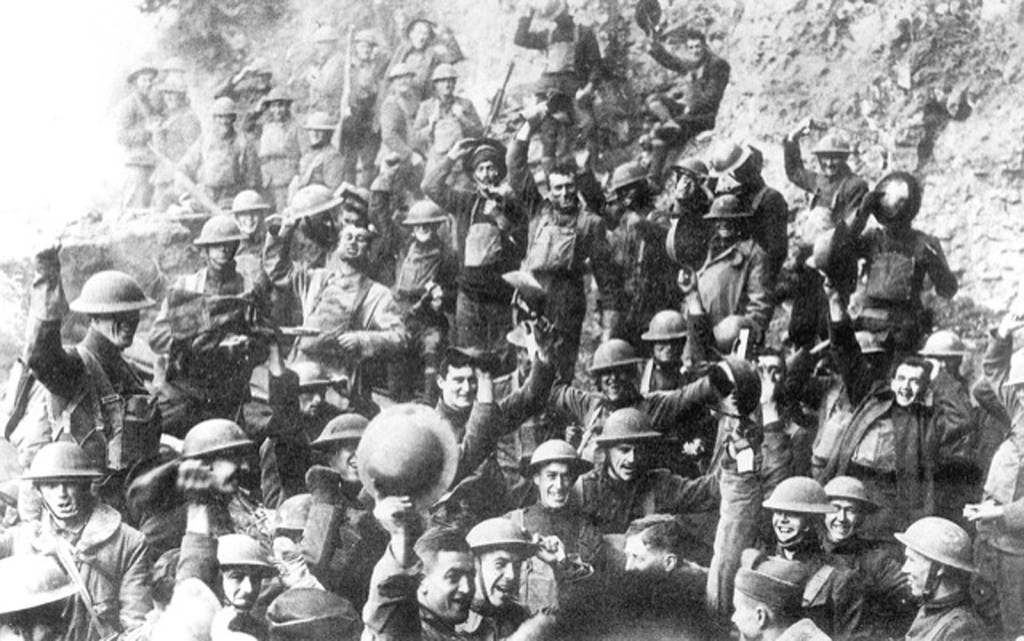 Americans celebrate the end of World War I on November 11, 1918. (Wiki photo)

Corporal Howard M. Guthrie, who grew up in Danville and was a former newspaper carrier for The Advocate-Messenger, headed to France in May 1918 to serve his country during World War I.

Guthrie got his early training with the Army at Camp Zachery Taylor in Louisville. He was transferred to Camp Sevier, South Carolina, and then headed to Camp Merritt, New Jersey.

While serving in France, he wrote letters frequently to his parents, William W. and Bettie G. Guthrie of Beatty Avenue.

Guthrie said when the soldier train was enroute from Camp Sevier to Camp Merritt, it stopped in Raleigh, North Carolina, where people “loaded all the soldiers down with good things to eat, along with cigarettes and tobacco. At the stop in Philadelphia, the Red Cross was at the depot with a wagon load of apples for the soldier boys.”

Guthrie, a member of the American Expeditionary Forces in France, wrote a letter to his father on Nov. 24, 1918, on what he referred to as “father’s day.”

“This is a day set aside for all of us soldier boys that have been spared in this war to write to their fathers so we are calling it ‘father’s day.’ I give thanks that I have the privilege to write a letter, for some of the boys have not, and none of them have a better father than I.

“I felt that yours and mother’s prayers have guided me through the rough and dark ways. Your blood, born in me has given me courage enough to go through with what I have and to look in the face of death and not fear it and the courage to do or die.

“It was the fathers in this war that brought victory to our nation, as well as the sons. You gave me the ‘push’ that counted, so take some of the honors for yourself. I know you had two sons that tried to do their duty and not a blot is on their records. All fathers can’t say that, for I have seen many fall.

“I did not do the things you told me to do and I am sure you will forgive me when I explain. Your last words were, ‘Don’t take a German prisoner.’ I did.

“It was impossible for a soldier with a human heart to run a bayonet, 16 inches of cold steel, through, when he had both hands straight up, and praying for mercy and asking his God to spare him.

“So I broke my promise. I have tried to go right and do right. I want to save a lot of news to tell you when I return and I don’t think that will be long. Our division is made up mostly of Carolina and Tennessee boys.

“I am about the only one from Danville. Corporal McKinley Davis of Harrodsburg, was wounded.

“We are attached to the British army and we broke the Hindenburg line into small pieces, and have been all the way in the fight.

None of us are wearing medals, we are carrying our honors in our hearts.”

Guthrie was in one of the big drives of the Allies, came out of it without a scratch and, as he says, “picked up several souvenirs.”

He found 127 pieces of German money, a watch, and a small photo of a German family.

He wrote to his mother that he was safe and sound. “It looks like a miracle, as we were in the big drive. We went over the top on Sept. 29, 1918, and our loss was small, compared to the number of Germans we captured. Only two men in my squad were wounded.

“The Germans are sure on the run and we are going to keep it up. Things look like it’s going to stop soon, My unit broke the Hindenburg line on one of the strongest points. It sure was a palace for fighting men.”

The Hindenburg Line was built on the Western Front and ran from north to south in France until it was broken in the 1918 Hundred Days Offensive.

Guthrie sent a German watch to his father in February 1919. McKinley Davis brought the watch to Guthrie’s parents.

After returning home on April 25, 1919, Guthrie worked as an insurance salesman in Lexington.

He and his wife, the former Ida Gotham, had three children, Ona L., Carl W. and Howard Jr.

They lived in Lexington. He died June 30, 1969, when he was 73 years old, and is buried in the Bluegrass Memorial Gardens in Jessamine County.