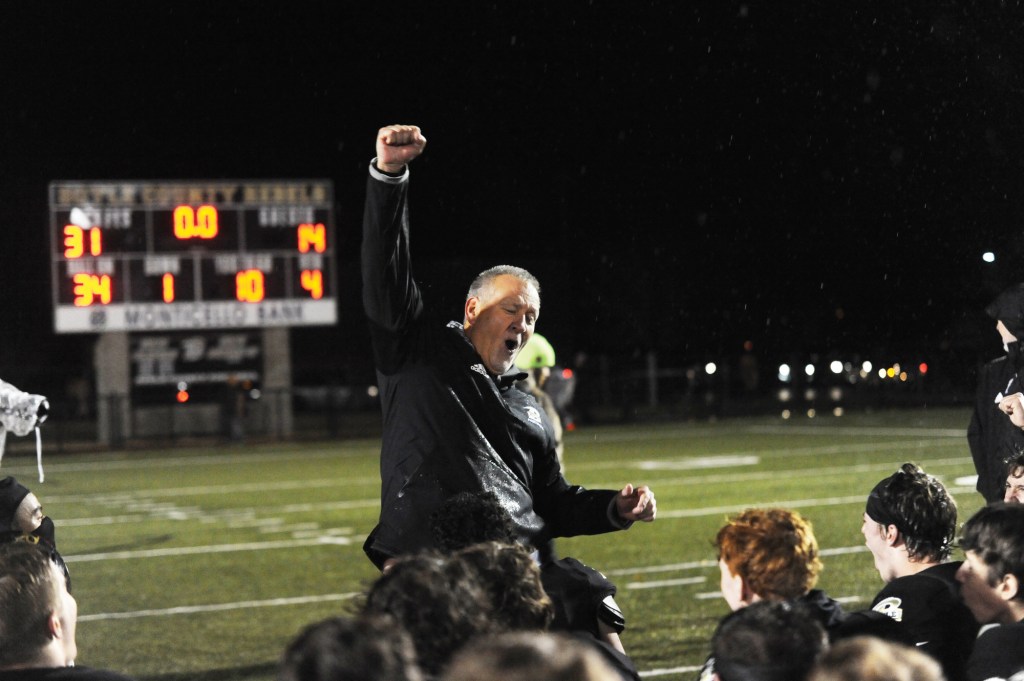 Last year the Rebels played their worst game in the semifinals of the state tournament and were shutout by Corbin. They vowed that wouldn’t happen again. Friday night, Boyle played the team that would go on to win that state championship — Central — and got over that hurdle with a 31-14 win.

“These guys have been determined all year,” Boyle coach Chuck Smith said. “Nothing was going to stop them tonight.”

“It definetely feels good to be back,” senior Reiley Colwick said. “Last year we fell short and we seniors took that personally. It’s really been motivation to get back to where we were in 2017.”

“It feels amazing. The feeling never gets old,” Reese Smith added. “Coach Smith told us to keep it in the back of our mind and we had all year long.”

For the seniors — and particularly quarterback Reed Lanter — Friday’s win is a culmination of an offseason of hard work.

But it wasn’t an easy win. For only the fourth time all year, the Rebels fell behind when the Yellow Jackets put together an impressive drive that spanned 96 yards, capped off with a QB sneak by Vernon Duncan.

“We knew they had a great team. They’ve got great athletes,” Reese Smith said. “They’re the defending 3A state champs. They’re coming in expecting to win the game. That’s definitely the hardest team we’ve faced all year.”

And Boyle answered back immediately with a quick drive that was capped off with a slant to Reiley Colwick from Reed Lanter for a 28-yard TD to take the lead that they won’t surrender.

“Every drive is important in a game like this,” Lanter said. “But that one — we were down, our backs were against the wall and we needed to punch back. It was huge. Biggest drive of the game.”

In Central’s next drive, starting quarterback Duncan was knocked out with what appeared to be a head injury in a scary moment. While he never re-entered the game, the Central coaching staff said that he was mostly alright.

When Boyle got the ball back, it didn’t take them long to get back in the end zone. Lanter connected with Reese Smith who made a beautiful over the shoulder catch to give them a first down and then again on a similar play for a 26-yard score to go up 14-6. 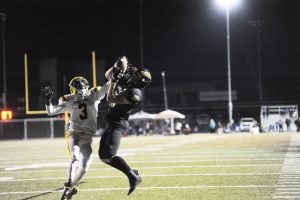 Reese Smith made two acrobatic catches in one drive on Friday. One for a first down and one for a TD. (Photo Derek Brightwell)

“We’ve had that connection since we were little kids,” Smith said. “He knows where I’m going to be and I know he’s going to put it where it needs to be. You saw it tonight, he just puts it right on the money.”

“They connect — they’ve been connecting all year long,” coach Smith. “Reese stepped up. Reed stepped. They made some great plays. Reed got the ball to him and Reese will go get it.”

After getting the ball back close to the end of the half with a chance to pull away, Lanter threw only his third interception of the year. That wasn’t the only rarity as the Central defense — who only have allowed 10 points per game all year — kept the state’s most explosive offense to only 14 points in the half.

“They’re a really good defense and we knew that going in,” coach Smith said.

But the Rebels started to pull away in the second half. Just over a minute and a half in, Will McDaniel punched it in from 10 yards out to extend the lead and Jackson Smith made a 29-yard field goal to add three more points before the quarter ended.

Central showed some life early in the fourth quarter when backup QB Keileon Hathaway sprinted down the Boyle sideline, made two Rebel defenders tackle each other en route to a 56-yard score of his own. But McDaniel answered back with a 41-yard sprint to push the lead to its final. McDaniel would finish the game with 179 of the team’s 186 yards on 25 carries.

“My offensive line did a great job to get there and open holes for me,” McDaniel said. “Those holes were as wide as the sea so I got to give them all the credit. They don’t get enough credit.”

“Will had a great game. He really got after it,” coach Smith said. “He played well on defense but he ran the ball with a purpose and attitude on offense. I’m really proud of him. He had great balance and got after them.”

For the Rebels, Friday’s win is only a step to the overall goal of a state championship. While getting back to the title game after last year was a cathartic moment for the team — especially the seniors — they know that it isn’t enough. 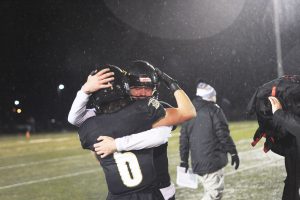 “It feels really good. Especially being a senior,” Lanter said. “There was a lot of pressure on us going into this game because we wanted to end on a good note and this a stepping stone to that.”

“This was their goal the whole year but it’s not enough to get there,” coach Smith said. “We’re going there to win.”

“Coach told us not to panic when things go wrong and we stayed cool, calm and collected and did what we had to do to win,” Reese Smith added. “We’re finally here — the mission’s not finished yet but we’re going to go back to work Monday to finish it.”

As for if the coaching staff will let the players enjoy this one a little longer?