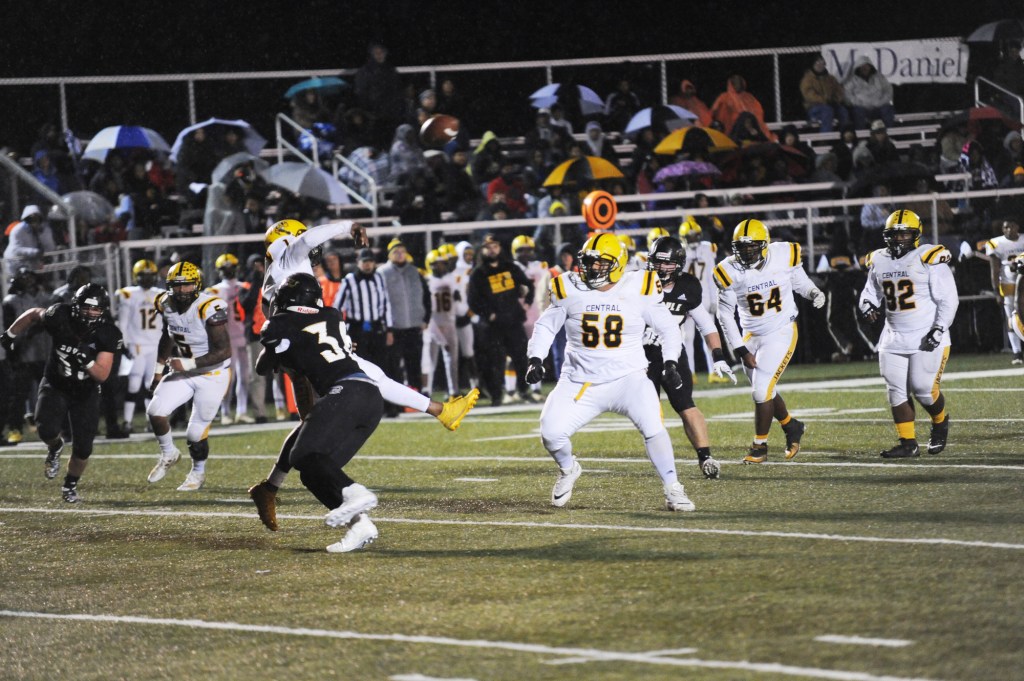 When your defense surrenders touchdowns as rarely as Boyle County has this season, you tend to take it personally when the other team reaches the end zone.

So when Central shoved the ball down Boyle’s collective throat to take the lead early in the second quarter Friday night, the Rebels simply couldn’t stand for it.

Two things changed at about the same time soon after Central took a 6-0 lead early in the second quarter, and they combined to change the course of the game that sent the Rebels back to the state finals for the second time in three years.

Boyle’s defense found its stride on the next series after it allowed a 96-yard touchdown drive, and Central lost its starting quarterback to an injury. The Rebels gave up only a couple of big plays after that as they rolled to a 31-14 victory in a Class 4A semifinal at Rebel Stadium.

“We knew they were going to be physical,” Boyle linebacker Hayden Bottoms said. “Coach Smith said we had to come out and lay the first punch, and that’s kind of what we did. But when they drove the ball … we just had to regroup, and that’s exactly what we did.”

Central used 16 plays and 8:27 of the game clock to cover 96 yards on its second possession, scoring when quarterback Vernon Duncan scored from 1 yard out on fourth-and-goal.

However, that might have served to aggravate Boyle’s defenders more than alarm them.

“We 100 percent take it personally,” Bottoms said. “Nobody’s happy whenever we get scored on.”

Jeff Hester, Boyle’s defensive coordinator, said that’s as it should be.

Boyle has given up 149 points this season, an average of just 10.6 per game. The Rebels have allowed seven points or less nine times in 14 games, establishing themselves as one of the best defenses in Kentucky.

Their numbers weren’t quite that good Friday, as Central scored twice and amassed 237 yards, nearly twice as many as Boyle’s per-game average.

Still it was clear that the Rebels played far better defense after they fell behind, starting with the very next series in which they forced a three-and-out.

“We talked about it all week: They’re going to throw punches, but we’re going to have to throw some back, because they’re a good team but so are we,” Boyle linebacker Ezarious Roller said.

Boyle had taken a 7-6 lead just over two minutes after Central’s score, and the Yellowjackets took over at their own 20-yard line after the ensuing kickoff. The three subsequent plays netted only 6 yards, Central was forced to punt and Boyle scored again about a minute later.

“We knew we had to stop them,” Bottoms said. “We all just came together and said, ‘Let’s hold ’em,’ and that’s exactly what we did.”

Hester said it was a critical three-and-out, meeting the goal for every Boyle defensive series.

“That’s what we work on every day: Getting off the field on third down, three-and-out, and giving the ball back to our offense and giving them a chance,” he said.

Certainly, Central’s offense was hurt by the loss of its quarterback during that series. Duncan took a hit on a rushing attempt on the second play and briefly lay motionless on the field. He was taken from the field on a stretcher and to the hospital via ambulance, though Central’s coaches indicated they didn’t believe he was seriously injured.

The Yellowjackets are a run-first team – they entered the game averaging only 69 passing yards per game – and Duncan had thrown only twice before leaving the game. But they became even more ground-bound after he was injured, and they finished with only five pass attempts among their 47 plays from scrimmage.

Hester said stopping the run is always the priority for a Boyle defense.

Boyle will test its defense against a potent Johnson Central offense in the Class 4A championship game Dec. 6 at Kroger Field in Lexington. Johnson Central has scored 50 points or more five times this season – including in its 52-14 semifinal win over Madisonville-North Hopkins – and is averaging 46.9 points per game.

Boyle’s defense, however, has proven every bit as powerful. Hester didn’t want to compare this defense to some of the other top defenses Boyle has fielded in the past, but he said this unit is certainly a strong one.

“To compare them to different teams, I don’t know that you can,” he said. “But I just know they’re a good defensive team, they’re working hard at it and they’re playing together as a unit, and that’s what I like about it.”