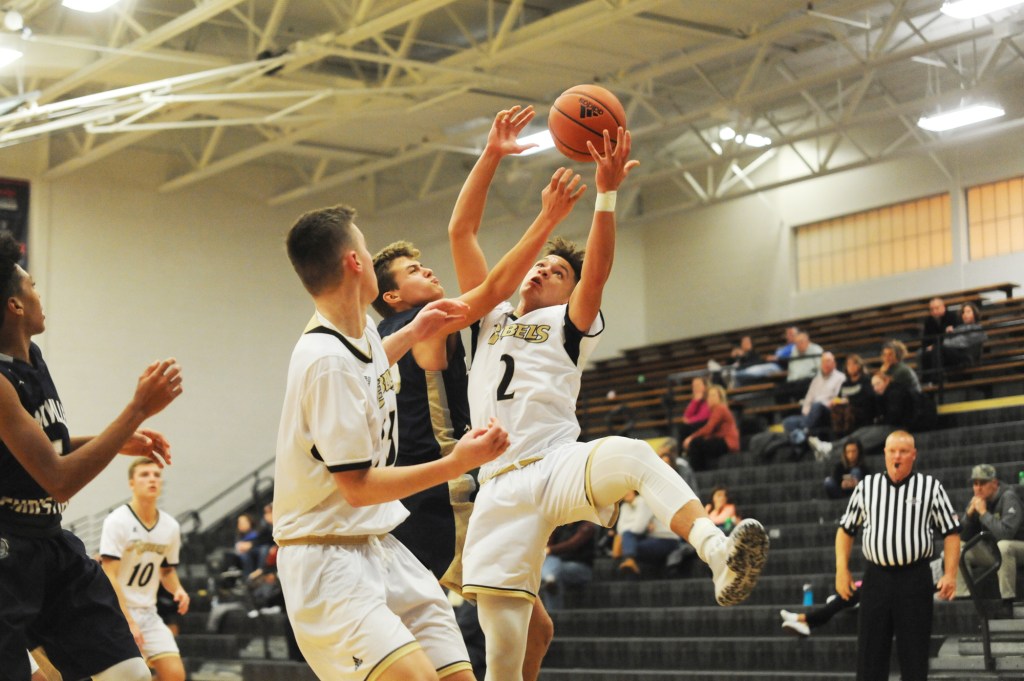 Luke Imfeld was the Rebels' leading scorer with 21 points in the home opener win over DCA. (Photo Derek Brightwell)

Dennie Webb’s off to a pretty good start in his stint as the Boyle County boys basketball head coach. In his first game after moving up a slot on the sidelines, his Rebels toppled Danville Christian Academy 87-51.

“It’s always good to get a win, right? I was happy for the kids,” Webb said. “We saw some things we need to work on, we did some things well and a lot of kids got to play. There’s a lot of benefits there but it’s always good to get that first win and we’ll enjoy it. But we’ve got to keep building. There’s a lot to do.”
Webb knew going in that he was inheriting a team that was lacking in a lot of varsity experience and he was able to get every player on his team in the game for at least six minutes.

One player that did have varsity experience, but needed to shake off some rust was senior Grant Hotchkiss who’s back after missing almost all of last season with an injury.

Hotchkiss started the game off strong, hitting a three on the Rebels’ first possession and then getting a steal and an easy layup to account for the first five points of the game. But as the game went on, he was only able to put in four more points in 14 minutes.

“He’s coming along and did a nice job tonight. We’ve got to get him in shape and get him back to playing speed,” Webb said, laughing as Hotchkiss walked past him and smiled. “He’s done a nice job. He’s a heck of a player but if you lay off a year and aren’t able to do much — it’s tough to come back from that.

“He’s doing a lot of stuff in practice as far as getting ready and getting stronger. We only expect good things going forward and it’s going to get better for him as it goes along.”

Another player with varsity experience is sophomore Luke Imfeld who led the way for Boyle with 21 points. He also grabbed four rebounds — 3 offensive — and had an assist. Most of his scoring came in the second half, as he went 3-12 from the field in the first and only had nine points.

“Luke struggled a little bit early getting that shot to fall but it eventually started falling for him,” Webb said. “A lot of it for him is taking the good shots — when he’s set and ready or it goes inside out to him. Once he got going, he can put the ball in the hole.”

As far as players getting in their first varsity game of the year, Owen Barnes shined as he had 17 points — the only other Rebel to reach double digits — on 7-10 shooting and had six boards and three assists. 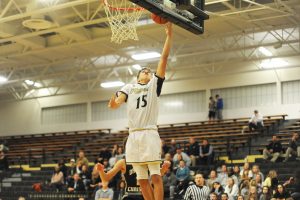 Owen Barnes was the only other Rebel to score in double digits with 17 points in his varsity debut. (Photo Derek Brightwell)

“Owen is going to be a big part of what we’re doing in the future. I’m glad that he got to get a lot of minutes,” the coach said. “I’m hoping when we start going along the next few games he starts growing a little bit more. As a freshman, you’ve got a lot to learn. He’s a good athlete, he plays hard but he’s just got to learn some technique and sustaining that effort.”

Sustaining the effort was something that coach Webb feels his team still needs to work on. Despite coming out of the first game of the year against a district opponent with a convincing win, Webb isn’t satisfied and doesn’t want his team to be, either.

“I told them in there after the game we’re going to watch the film and see what we didn’t do well or what could be better,” he said. “You’ve just got to grow from it. It wasn’t perfect by any means. You just got to keep growing. No matter if it’s a win or loss — there’s no such thing as a perfect win and especially losses aren’t either.”

Danville Christian got a huge game from junior Channing Ford who accounted for 30 of the team’s 51 points. Another 14 points came from senior Luke Caldwell. DCA will host Burgin on Tuesday, December 3.

The Rebels will play at Somerset a week later on Tuesday, December 10.