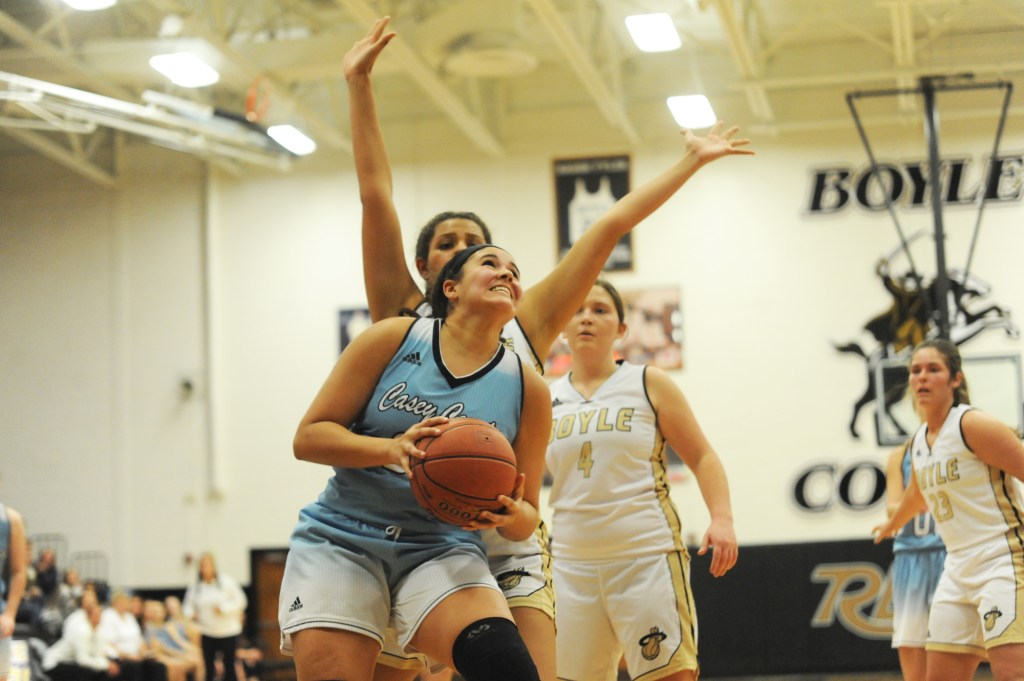 Shaylah Wilkey was the game's leading scorer with 22 points, 16 of which came in the second half. (Photo Derek Brightwell)

One thing was for sure Monday night when Casey County traveled to Boyle County for the season opener — the Lady Rebels were going to win. After a half of basketball, though, it still wasn’t clear which Lady Rebels it would be.

Casey had led for most of the first half, but was never able to pull away. Tara Weddle’s team entered the season with high hopes — returning everybody from the team that advanced to the region final a year ago.

Yet when Keely Bowling hit back to back threes, the score was knotted at 24 as the first half horn sounded.

“I thought the first half we came out lackadaisical and not very focused,” Weddle said. “I’m not sure why that is, we did that the other day at the scrimmage and we did it again tonight. I told them — both times we came out of the locker room before the game started we walked onto the court. That just shows we’re not ready.”

The second half was a different story all together.

Casey County came out of the locker room on fire and quickly pulled away from the hosting Rebels and what started as a 24-24 tie turned into a 39-30 deficit for Boyle when first year coach Ryan Wiersma called a timeout just over halfway through the period.

That didn’t slow Casey County down as it extended its lead to 51-37 by the end of the third quarter. By the end of the game, Casey had pulled away even further to claim a 74-45 victory.

“Second half, they got themselves together in the locker room. They came out ready,” Weddle said. “They came out more the way they should be playing. I’m not sure what that was in the first half.”

One player who contributed to that change in the second half was center Shaylah Wilkey. In the first half, Wilkey had six points and missed every free throw attempt. In the second, she had 16 points, including a perfect 4-4 from the line.

Weddle said she wasn’t sure why the team has come out so flat in the first half of their last two games, but has a theory, at least, about this one.

“A lot of it was first game jitters,” she said. “We’ve played two scrimmages, but it’s not the same. It’s a 12th region team. Anytime you’re playing in the region, it’s jittery and nervous.”

Getting the fist win of the season — especially on the road — against a regional opponent is always big, no matter what the expectations were for the team going in, and Weddle knows this.

Wilkey led all scorers with 22 points, while Lauren Lee and Natalie Duggins each had 16. For Boyle, Emily Glasscock’s 14 points was the team high while Peyton Bugg had 13.

Boyle will take on Middlesboro at South Laurel on Saturday, Dec 7 at 11:00 a.m.

Casey will be without a single day of rest as they host Maribyrnong College from Victoria, Australia Tuesday, Dec 3 at 7:30 p.m.

“We don’t know anything about them,” Weddle said about the opponent.