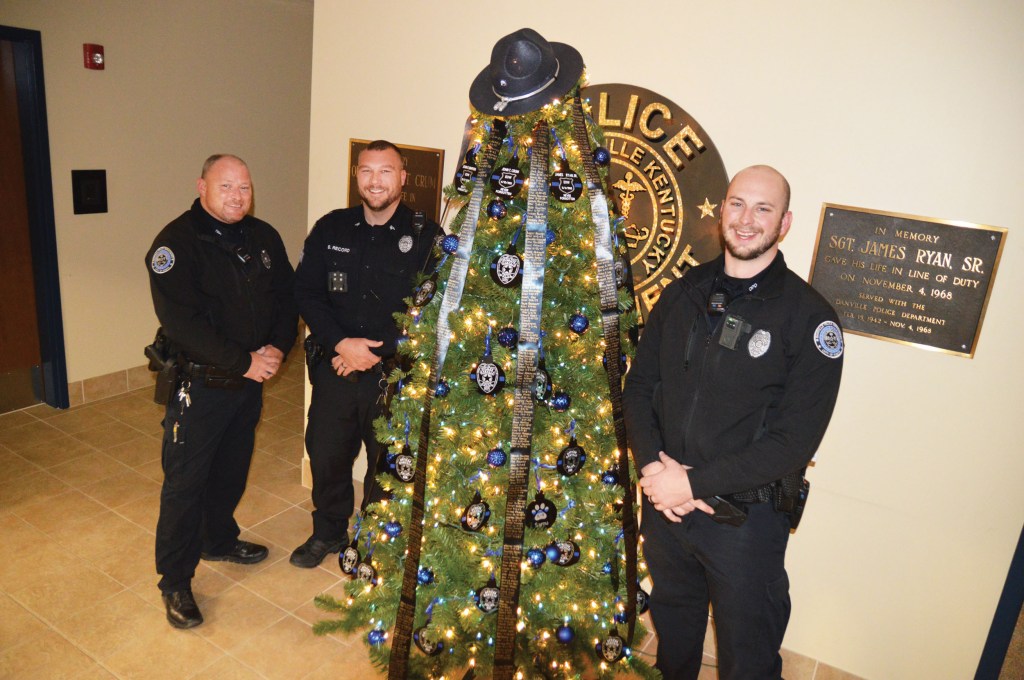 Ofc. Aaron Rainwater, from left, Sgt. Brandon Record and Ofc. Casey Whittle stand by the fallen officer tree in the lobby of the Danville Police Department.

Danville Police Officer Aaron Rainwater said many in Kentucky have given the ultimate sacrifice in the line of duty. He decided to create something — with the help of many others, he makes sure to point out —  for the holidays that highlights each of those sacrifices.

In the lobby of the police department inside of Danville City Hall stands a tall tree, complete with white lights and blue ornaments. But it’s also decorated with badges for each person on the Danville force, as well as ribbons with the names of every officer who’s fallen in the line of duty in the state of Kentucky. 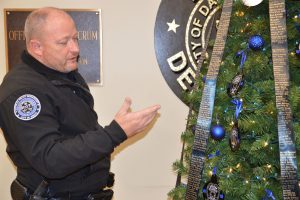 Ofc. Aaron Rainwater explains why the fallen officers’ names written on the ribbons are so meaningful to the department. (Bobbie Curd photo)

“It’s something I’ve wanted to do for years,” Ofc. Rainwater says, looking at the tree. A good friend of his died while serving — Dep. Sheriff C. Anthony Rakes of Lebanon. He worked for the Marion County Sheriff’s Office and was shot and killed in November of 2012, as he was approaching a car stopped at 2 a.m. in the middle of a highway.

“It was around Christmastime when it happened, so I thought it’d be neat to do a fallen officer tree,” Rainwater says.

He had first thought of making individual ornaments for each fallen officer, but unfortunately, there were too many. The ribbons on the tree hold more than 800 names of law enforcement personnel killed in the line of duty.

According to the Officer Down Memorial Page, there have been a total of 874 who have lost their lives. These names are not only police, sheriff and state police personnel, but Fish and Wildlife as well as the departments of Corrections and Alcohol Beverage Control, for example.

“That would be a lot of ornaments to go on a tree,” Rainwater says. Sgt. Brandon Record provides several pages which show the names of all officers killed in the line of duty.

Asst. Chief Glenn Doan came up with the idea of writing their names on ribbons to drape over the tree. 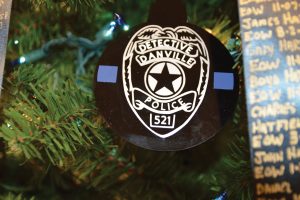 The work was a group effort that began with Ofc. Rainwater, Sgt. Record and Ofc. Casey Whittle. “And we had multiple officers help us work on it,” Rainwater says. “Whittle’s mother actually took care of all of the ornaments for us.”

“Yeah, she’s very crafty and artsy, she’s been making some awesome stuff,” Whittle says about his mom, Angela. He sent her a picture of their badges and she sent back some ideas.

“I showed it to everybody to make sure they liked them, and she made them just look awesome,” he says.

His mom was also going through chemotherapy for breast cancer while she made the ornaments.

“And to give her even more credit, when they went to pay her for all this? She donated the money back to Shop with a Cop. So she paid for it. She’s a good woman,” Rainwater says. Whittle smiles widely.

“I asked if we could put her name out there, and she said yes, you can, but she didn’t need it or want it,” Whittle says.

“They are black, acrylic ornaments that I ordered …” says Angela Whittle in a phone interview. Then she designed them and cut them out with her cricut machine.

“I do this as a hobby … I just wanted to donate the money back,” she says. Angela Whittle says that working on the police badge ornaments was actually good for her; she just finished-up her treatments last week. “Lots of days I didn’t feel like doing anything physically, or doing a lot of other things. But I can sit there and work on those ornaments. It was good for me.”

Angela Whittle had just returned from a follow-up with her oncologist in Lexington, and said everything is going as planned. She starts radiation the first of the year.

“I just have a big heart for the police department,” she says. “I think highly of all of them.” 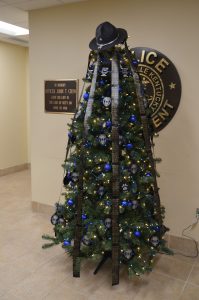 Back in the lobby of the PD, Rainwater looks through the vast list of names on the ribbons. “These are the guys who came out and did what we do everyday. They gave the ultimate sacrifice. It’s the least we can do for them,” he says.

“It’s not, at least for me, it’s not just a list of dead men and women,” Ofc. Whittle says. He says it’s a list of people who embody the spirit of what he and all of his partners on the force want to do.

“They were willing to take it as far as they had to, to serve their communities. That’s what we want to do. We’ll do whatever we gotta do to keep people safe, and to serve.”