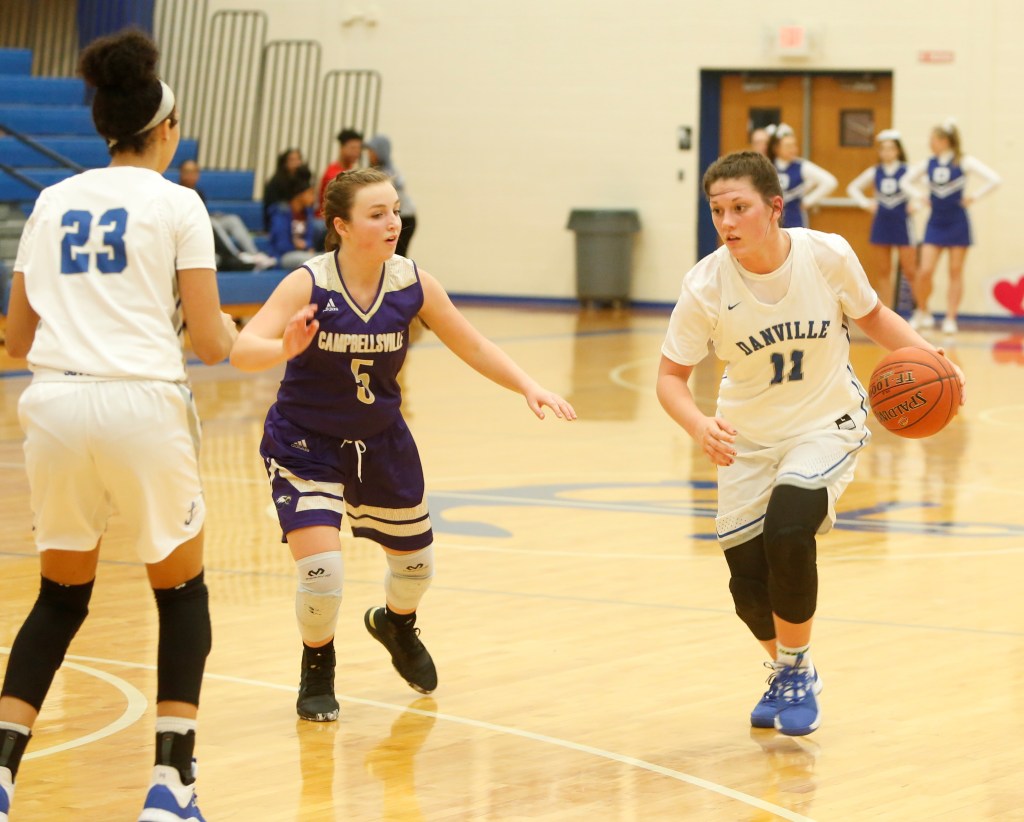 Camryn Preston (11) of Danville dribbles the ball on the perimeter as teammate Desiree Tandy (23) sets a screen for Campbellsville defender Lainey Watson during the third quarter of the Lady Admirals’ 72-41 victory over Campbellsville on Monday. Preston scored a game-high 22 points in her Danville debut. (Photo Mike Marsee)

Judie Mason was not surprised.

The haphazard play that punctuated the Danville girls’ opening night victory over Campbellsville came as no surprise to their veteran coach, who said it’s going to take a little time for this team to find its identity.

On the other hand, Mason also was not surprised by the effort the Lady Admirals displayed in their 72-41 win Monday night, and she said that work ethic will serve them well as a new season unfolds.

“It was a hot mess, and I knew it was going to be from the beginning,” Mason said. “I thought we played hard, so I can deal with all the other stuff, but we’ve got to clean it up.”

Host Danville (1-0) won despite committing 23 turnovers and 19 fouls, in large part because it shot 50 percent from the field and forced 25 Campbellsville turnovers.

Most of the players who led Danville to one of the best seasons in school history last year have returned – with one notable exception. The Lady Admirals are learning to play a different type of game without Ivy Turner, an all-state guard who now plays for Northern Kentucky University and was named the Horizon League freshman of the week earlier Monday.

“We’ve got to learn to play without Ivy. We were so used to her running down the floor and taking care of everything, and I think that had a lot to do with the turnovers,” Mason said.

Meanwhile, a new face made a significant contribution in her first game as a Lady Admiral. Camryn Preston, a junior guard who transferred from Mercer County this summer, scored 18 points in the first half and finished with a game-high 22 points on 7-of-13 shooting from the field.

Preston opened the game with a 3-point basket from the left wing, and Danville went on to score 12 of the game’s first 15 points.

The Lady Admirals led by as many as 16 in a 27-point first quarter in which seven different players scored. Nine players scored in all for what figures to be a deeper Danville team than in recent seasons.

“I really like being able to play eight kids the way we play,” Mason said.

Preston, who also had a game-high nine rebounds, scored 12 points in the second quarter to Danville protect its lead.

Desiree Tandy came off the bench to score eight first-quarter points, and she finished with 15 for the Lady Admirals.

Danville led by as many as 23 points before scoring the last 12 points of the game in a run that included five points by Tyliah Bradshaw.

Mason said fouls kept them from pulling away earlier in the game.

“Every time we’d make a run we’d start fouling,” she said. “All of that fouling took away all of our hustle. Reach, reach, reach – that isn’t us. We’ve got to use our speed.”

She attributed the high turnover total to not practicing at the same speed that games will be played.

“They’ve got to practice at that pace,” Mason said. “I’m pleased because of the effort and the fact that they’re coachable, but the turnovers happened because they’re not practicing at full speed. And I’m hoping the more games we play, we’ll figure that out.”