One Day: Hub barista says people are the best part of her job 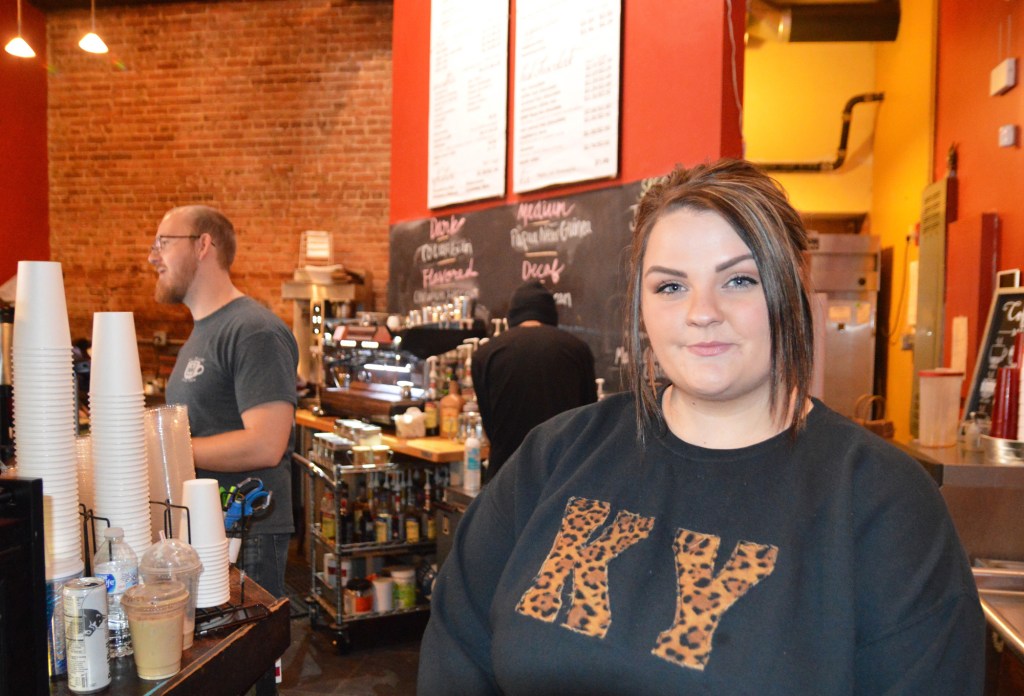 Savannah Slaughter has worked at The Hub for more than three years. Her husband Kyle, seen in the background, manages it. She says they work together very well. (Bobbie Curd photo) 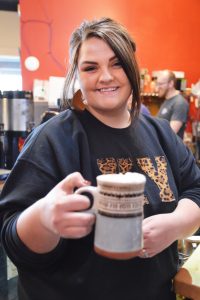 Savannah Slaughter serves up a hot cup of coffee. (Photo by Bobbie Curd)

Anyone who’s ever frequented The Hub Coffee House & Cafe on Main Street is quite familiar with a friendly face who’s normally behind the counter. And Savannah Slaughter says that’s just the way she likes it.

“We get a lot of regulars who come in every single day,” she says, keeping a smile on while talking. “They come in every day. For me, I love that. It’s always nice to see a familiar face.” When there’s not a smile on Slaughter’s lips, her bright blue eyes do it for her.

“My favorite part of the job is working with customers. I’ve gotten to know a lot of people from Danville. I’ve met doctors, professors, students … It’s great, I love it.”

Slaughter, who’s 20, says people are usually in a pretty good mood when they come in to get their coffee fix. She works the morning shift five days a week.

The Hub opens at 6:30 a.m., but she comes in at 7 as “opener support. I mostly take orders and make drinks; someone else is usually in the kitchen.”

Those who are regulars are known to stick to their habits, she says — another thing she loves about her job. “We know names, faces. It’s pretty nice. Sometimes we see them walk in and start making what we know they want before they order it. And sometimes, you know, they may change it up. But most of the regulars stick to their regular orders.”

They also have their regular spots they stick to in the cafe, either on one of the couches, a table hidden in the back or sitting on a stool overlooking the foot and car traffic of Main Street.

“Here’s one of our regulars!” Slaughter says in her chipper, upbeat manner. 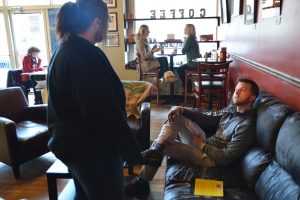 Bradley Dean, of Danville, is cozily sunken back into a couch, sipping his hot drink while reading. The two talk for a minute.

“Oh, she’s fantastic,” Dean replies, when asked what makes Slaughter good at her job. “She’s one of the best. She’s welcoming; she’s a conversationalist.”

Dean says he especially appreciates overhearing how Slaughter will not only just take an order, but she asks her customers questions; she cares.

For a side-hustle, Slaughter is getting deeper into photography, something she picked up about two years ago. She says the owner, Jason Cullen, works with her on her schedule really well; he’s understanding. “That’s why I love it here.”

She does high-school senior and family portraits, for example, but says her favorite is shots with couples. “They’re just sweet, and the poses are so cute.”

Her husband, Kyle, manages the place. They seem to work together behind the counter like a well-oiled machine, dodging around each other as they make orders.

“The weirdest order I’ve ever gotten? Probably espresso with soda water. That was a strange combo,” Slaughter says. Many are very specific about their drinks; 2% over whole milk or cream, some want sugar-free almond milk …

“But that’s good. They know what they want,” she says, again, smiling brightly.

She moved to Danville with her family when she was young and attended school up through Bate Middle, then decided to be homeschooled. “My older brother had a baby at a young age, so my mom started homeschooling him so he could be home, and I wanted to do it, too. We wanted to stay home and work together.”

On the crazy days, Slaughter is known to continue her upbeat attitude. “I like it better when it’s busy. I feel like the day goes by faster.”

As long as she can work with the public and spread some cheer, Slaughter says it’s all worth it.