Annual service brings together those who have lost children, siblings 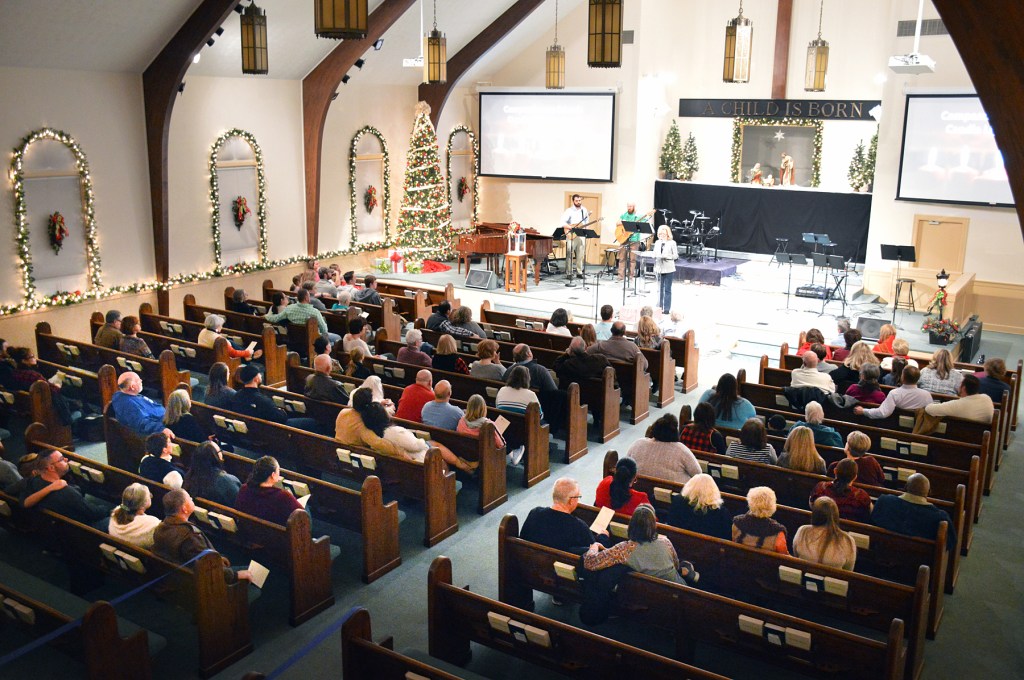 The annual candle-lighting service for parents, grandparents and siblings who have suffered the loss of a child will be held at 6:30 p.m. Sunday, Dec. 8 at Calvary Baptist Church. (Photo from 2018 service by Jackie LaMonds)

A night of compassion

Compassionate Friends is an organization that nobody wants to join. Yet the number of people who attend its annual December candle lighting service grows every year.

Compassionate Friends, which has a chapter in Danville, is worldwide support group for parents, siblings and grandparents whose son, daughter, sister, brother or grandchild have died.

“We get it. Nobody can understand unless they’ve been in our shoes,” said local chapter leader Dana Lawhorn.

On Sunday, Dec. 8, Compassionate Friends across the world will hold their annual candle-lighting services in honor and remembrance of their children who have died — no matter their age.

In Danville, the service will be 6:30 p.m. at Calvary Baptist Church.

Parents grieve the death of their child, whether it was due to miscarrage, car accident, illness or overdose. “It doesn’t matter how your child died. They died. It doesn’t matter the circumstances behind it,” Lawhorn said.

At the service, a “beautiful slideshow” of photos of those being honored will be shown and set to music, Lawhorn said. There will be meaningful readings and music provided by the church will soften the solemn atmosphere.

The service culminates as the name of each remembered child is spoken, and the parent, grandparent or sibling comes forward to light their candle. 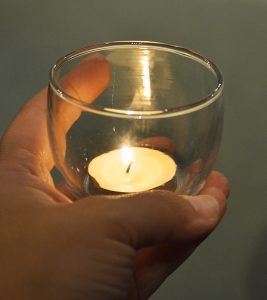 A candle is lit in memory of a child who had died during the Compassionate Friends Candle Lighting Service in 2018. (Photo by Jackie LaMonds)

Sometimes, a friend or other family member will step in to light the candle “because some parents cannot make themselves come to this. They can’t get in the door,” Lawhorn said.

She knows how hard it is to lose a child because her son, Josh, died at age 20 in a car accident in Casey County — it will be nine years ago in January. His birthday is Dec. 14 and he would have been 29 years old, Lawhorn said. “How I miss him.”

“We know it’s hard for people who have never attended a candle lighting to get in that door,” Lawhorn said.

However, her sister-in-law, who attended her first service last year, told Lawhorn, “I never dreamed there was so much love in a room full of so many people that were heartbroken. You can just feel the love for each other, from people who are completely heartbroken.”

The candle-lighting service is a special event that Compassionate Friends hosts. But the group also meets at 7 p.m. on the first Tuesday of every month in a room at the Heritage Hospice Building, 120 Enterprise Drive in Danville. 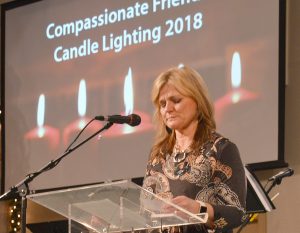 Dana Lawhorn is the local chapter leader for Compassionate Friends. (Photo from 2018 service by Jackie LaMonds)

Parents, grandparents and siblings who have suffered a loss are welcome to attend. Lawhorn said she tells new members, “We’re sorry for the reason you’re here, but we’re glad you found us.” It’s important for those people to know they “aren’t walking this journey alone.”

For a recent group activity, Bright had members bring a ceramic plate to the meeting. They broke their plate and put them back together with glitter glue. It signified that, “Our hearts are forever broken. However, with Compassionate Friends, we are able to go on. Like, we have a crack in our heart, but to look at it, we’re together,” Bright said.

Compassionate Friends is non-denominational. “Some people are very angry at God when they come in. They don’t want to hear about their religion,” Lawhorn said.

She attempted to go to her first meeting for many months. She said she drove to the meetings and just sat in the parking lot. “It took several months to get in the door because I did not want to be a part of a group like that. … I didn’t want that in my life.”

But eventually she got through the door and is now a strong supporter of everyone who decides to attend. “Some meetings, you’re just mad. You can be mad at us — our feelings don’t get hurt, because we get it. You’re angry at life and at God, or need a night of crying — there’s lots of Kleenex.”

But there are also many times when members can laugh as they share fond stories about their children, Bright said.

Bright said, “Just walking through the door, it’s such a big step.”

Grandparents are welcome to attend the meetings because when they lose a grandchild, they have a “double whammy,” Lawhorn said.

“A grandparent is a parent. You always want to fix what’s hurting your child. … But when I look at my mom and dad, I know they want to help me, but they cannot. This is one pain they cannot fix, they cannot heal. As a grandparent, you’ve lost your grandchild, and you’ve lost a piece of your child because they lost their child,” Lawhorn said.

Tori Kenley lost her sister and roommate, Miranda Greer, four years ago in a car accident when she was 22 years old. She reads a special sibling poem during the candle-lighting service every year, but she’s not ready to become a member of the group. “You don’t want the membership,” Kenley said.

Having a sibling die is a difficult situation with many sides to face, she said.

“I’ll never understand it. I’ll never be OK with it. I really tried to make this a silver lining situation. That is the situation, we, as in my family, have to be in. I have to find the best parts,” she said.

Kenley said the world gets uglier by the year, but Miranda doesn’t have to deal with it. “That’s a blessing.”

And, as her grandparents leave this earth, Miranda will be there to greet them, she said. “It’s a blessing, but it’s not always easy to find those things. It takes time and practice and support.”

Kenley said she’s not only sad she lost her sister, she’s also sad for her mom.

“It’s really hard to have a parent that you’ve relied on your entire life, that’s always been your safe space, that has always been the one who helped you find the silver lining. It’s hard to look at them and know that they’ll never be that person again. I don’t expect them to be, but I miss that mom.”

At the end of each meeting, everyone stands up, holds hands and they go around the room and say their child’s names.

“We love to hear their names,” Lawhorn said.

Bright said, “I feel uplifted after I leave a meeting, just being with my sisterhood and brotherhood in grief, because they get it.”

On Sunday, Dec. 8, Compassionate Friends across the world will hold their annual candle-lighting services in honor and remembrance of their children who have died — no matter their age. In Danville, the service will be 6:30 p.m. at Calvary Baptist Church, 401 Waveland Ave.