Casey County basketball goes down under 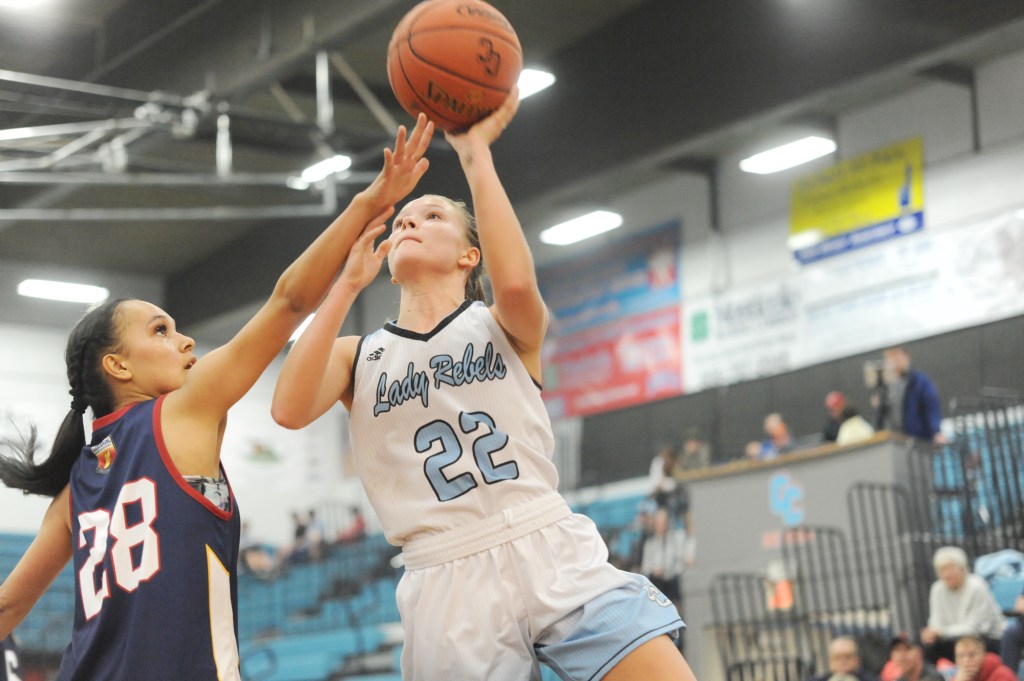 Casey senior Gena Cravens said that it was fun to learn about a different culture and compare Australian life to Kentucky life. (Photo Derek Brightwell)

Several teams — especially early in the season or around Christmas time — will play teams from out of the state. On Tuesday, Dec. 3 Casey County decided to take it a step further and hosted a team from Melbourne, Australia. The boys JV team and the girls varsity team played host for a double header that ended with a sound defeat for the JV team against a much older squad and a tight, four point loss for one of the 12th region favorites.

“Our girls were having some trouble finding games because we have seven seniors this year who’ve started multiple years. We had a couple of really good tournament runs,” Casey County athletic director Steve Stonebreaker said about how the games came about. “This email came across for coach Weddle and she sent it to me and we were able to work out a deal to bring them here. It was great to get our girls another home game and get some competition in as well.”

For Casey’s girls coach Tara Weddle, Maribyrnong Academy presented a chance for her senior laden team to compete against a different caliber of opponent. Before coming to Kentucky, the Jets spent a week in Los Angeles playing in games that had a number of Division I scouts watching.

“We’d seen some of their scores from when they were in California and they were massacring teams. There were some scores that were like 100-23. It was insane,” Weddle said. “But I always expect my team to hang with any team we play and I felt like the first half — we had that lead and then we kind of got soft. I don’t think we were used to that aggressive of play. Usually teams don’t play us man-to-man and then they’re out here going from baseline to baseline.”

In the first half, the Lady Rebels held a 10 point lead, but a buzzer beater capped off a Jets comeback to take the lead going into the locker rooms. In the second half, the Aussie’s aggressiveness proved too much for Casey who could never quite get the lead back.

“They were aggressive. In your shorts. If you passed the ball, they tried to get a hand on it no matter where it was,” Casey senior Gena Cravens said. “That was definitely the best team we’ll play all year and I’m glad we played them early because it will help us during the season when the games really start to matter.”

For both Casey County and Maribyrnong, the game was more than a chance to experience different styles of basketball, but also learn about different cultures.

“I love it. It’s awesome. It’s completely different from where I’m from,” the Jets boys coach Andrew West said. “Back in Melbourne, I’m a bit of a city kid. We were in LA for a week and it was a lot more like that. But this is awesome. It’s so much more rural and spacious. It’s great.

“It’s a great trip for the kids. Some of them don’t get to leave Australia in their lives. A few of them, this is their first time on an airplane for an extended period of time. This is great exposure and experience for them and something they’ll cherish for the rest of their lives.”

“(The Australians) have really good personalities. A couple of them came over and asked stuff like who lives on a farm or whatever,” she added. “It was definitely a culture shock for them, but they have the personalities that their ready to soak everything in.”

“It was great. We were all talking about how we said things different,” Cravens said.
It was a great experience to learn their culture. It was amazing. I’ve already made friends with some of them.”

Cravens added that for the most part, they had more in common with each other than they did differences, but there was one thing that she said the Australians were a bit disappointed in.

“They couldn’t believe we didn’t have an In-N-Out Burger. All we have is McDonald’s. They don’t even call it McDonald’s there (they call it Macca’s),” she said laughing. “They were not pleased with the restaurants.”

Overall, both schools felt like what they gained from the game — which did drop the Lady Rebels record to 1-1 on the year — was far greater than just a tightly contested basketball game. For teams comprised of kids who likely would never have experienced each other’s culture any other way, it was chance to make the world just a little bit smaller.