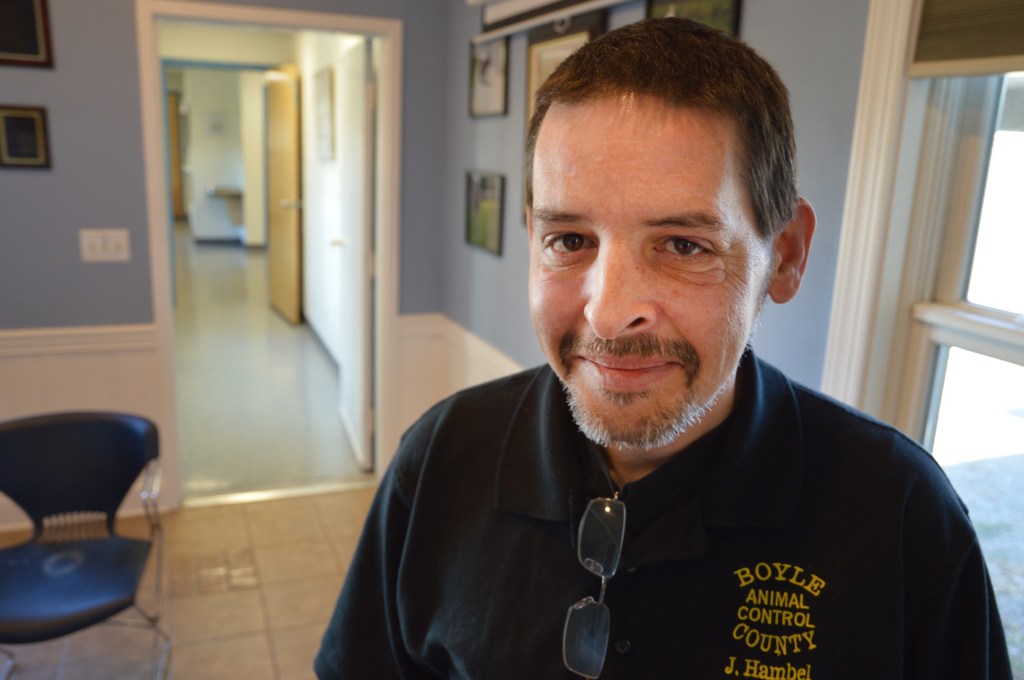 John Hambel is seen in a file photo from February. The former animal control director and shelter manager of the Danville-Boyle County Humane Society made heavy accusations against the shelter on social media, but has provided no proof supporting the allegations.

A former employee who retired last month has taken to social media levying hefty allegations against the county, including the Danville-Boyle County Humane Society. But Judge-Executive Howard Hunt and others involved with the shelter say his claims are totally without merit and that action may be taken.

John Hambel, who was the animal control director and shelter manager, first made a comment on the DBCHS Facebook page warning the community to “think twice” before donating to the shelter, and made several accusations which The Advocate-Messenger will not reprint due to an inability to verify and a lack of supporting evidence. The claims involved the euthanization of animals and how the shelter obtained grants.

Hambel also said Hunt “fell for lies” about him and forced him to retire or be fired. After Hambel’s post was removed from the shelter’s page, he posted on his own page, repeating the claims.

Wednesday, Judge Hunt was about to go into a meeting with some personnel to discuss the situation. “I’ve not really ever lived through anything quite like this,” he said. Because the circumstances surrounding Hambel’s “retirement” are a personnel matter, Hunt could not comment more specifically.

“There are some things that are out in front of this and what is yet to come. I have to be very cautious,” Hunt said. He said he was taking a very measured approach and “trying to do due diligence” to ensure the “safety and security of everybody involved.”

Hunt said rest assured, “I am quite confident that the allegations are without merit … This is a very troubling situation to a lot of people here at the courthouse and at the shelter.”

Hambel’s last day with the county was Nov. 26; he was contacted by a reporter on that day, but didn’t return calls. He was contacted again via social media on Monday about his post and asked to share any evidence with the newspaper involving his claims.

He responded, “The level of corruption in Boyle County is not something I want to be a part of. I’ve had many threats, and for my family’s safety I am done with this.”

Fizzy Ramsey, DBCHS Board President, currently has an emergency protective order that was issued by a judge against Hambel. However, deputies have not been able to reach Hambel at his home to serve the papers.

Ramsey said Hambel’s “claims are off the wall, inaccurate and very disheartening.”

As far as Hambel’s claims about how the shelter obtained grants, Ramsey said Hambel was involved in every process. “He utilized our grant funds to decrease the number of cats coming into the shelter, to decrease euthanisia. He was actually very supportive of everything going on with the grants … “

Hambel had not responded to additional questions Wednesday evening, asking for proof to back up his claims or who was allegedly threatening him.

Hunt was asked why he thought Hambel, who had worked for the shelter for the past 11 years, made such accusations. “I think what Jack had to say about sour grapes is probably accurate,” he said, referring to former Magistrate Jack Hendricks.

Hendricks replied to Hambel’s post after it began gaining some traction, being shared over 200 times with multiple comments before it disappeared on Tuesday morning. It is unclear whether Facebook or Hambel took the post down, but many said they did contact Facebook to report the allegations as false and defamatory.

Hendricks’ comment to Hambel warned him about making accusations he “can’t back up,” and told him to “knock off the BS.”

Hambel then accused Hendricks of attempting to “manipulate the constable election,” which made Hendricks give a hearty laugh over the phone Wednesday.

“That’s the stupidest thing I’ve ever heard in my life … To me, that’s slander,” he said. Hendricks also said the relationship between the county and humane society is a solid one, and that Hambel’s accusations are totally unfounded. “It’s just so wrong and pathetic, so far out in left field. And it’s unbelievable that anyone would believe it.”

Although the post was shared over 200 times, many came to the defense of the humane society. Several who commented asked Hambel why he was just speaking out about his claims now, as opposed to while he worked there, and many asked for details to back up his accusations, which he had not provided publicly as of Wednesday evening.

In a February interview with The Advocate-Messenger, Hambel said, in reference to the shelter, “This entire place works because everyone is on a team. We all function together, which is very wonderful.”

Wednesday afternoon, Hunt had a meeting with humane society board President Ramsey, along with county Treasurer Mary Conley and the two animal control officers. Before he could comment further about the situation surrounding Hambel or any action to be taken, Hunt said he needed to check in with County Attorney Chris Herron.

“This meeting is to discuss an efficient and effective way for us to collectively move forward from this point,” Hunt said.

Ramsey was asked about the details surrounding Hambel’s departure from the humane society. “I can’t comment on personnel issues. That’s between him and the county.”

She said the humane society is focused on its mission “and this will not derail us. We want to move forward and continue. We will continue to evolve and improve our practices of course, but his claims are ridiculously inaccurate — they are not true.”

The Danville-Boyle County Humane Society is rated with a “platinum seal of transparency” through GuideStar USA Inc., and information service specializing in reporting on nonprofit companies. “We’re a very transparent nonprofit,” said Fizzy Ramsey, DBCHS Board president. “We want individuals to know when people donate money to our organization, it is responsibly allocated.”

What to do this weekend: Weekender events for Dec.…