‘Fruitcakes’ opens Thursday night at WTH with some holiday cheer 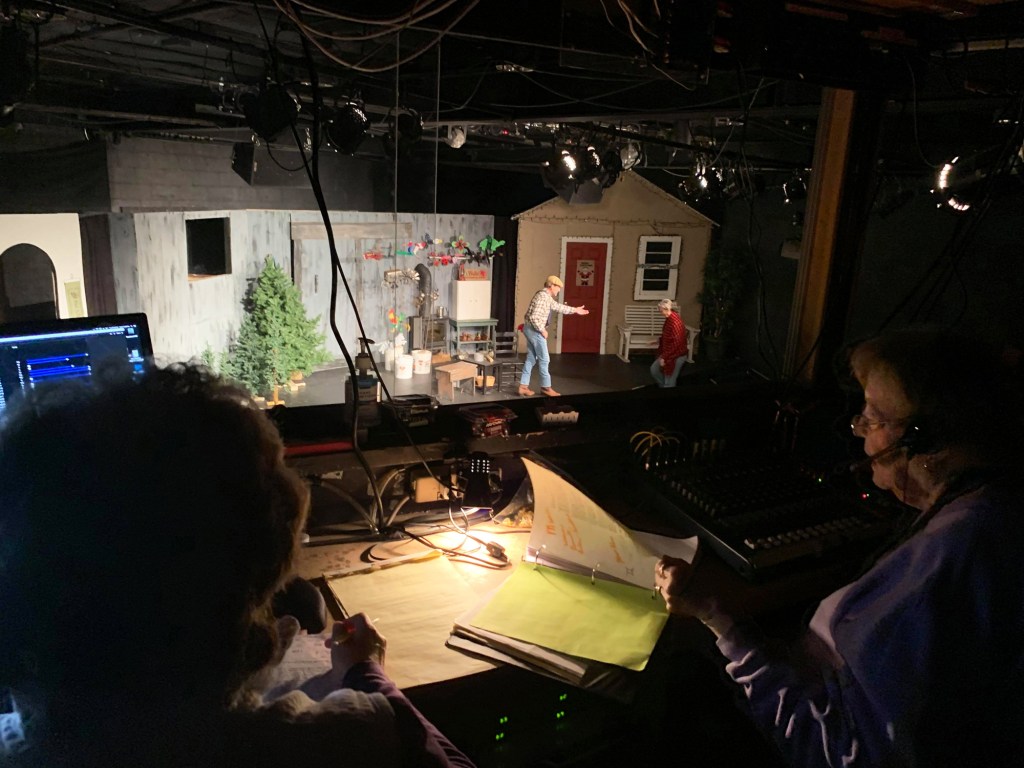 “Where are the girls? Send the girls in!” Stage manager Alice Berka says into her headset, from the booth high above the stage at West T. Hill Community Theatre. Tuesday night, Berka and director Karen Logue were getting the cast and crew into shape during a dress rehearsal for “Fruitcakes,” a comedy-drama that opens up tonight, Dec. 5. 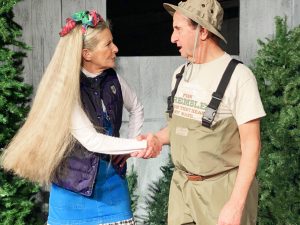 The production was actually on stage here once before, back in 1994.

“I have fond memories of it,” Logue says. “But now there is a whole generation of theater-goers and performers who have never even heard of it.”

They have now. The cast — 23 strong, with several kids in the lineup — has been living the play for the past several weeks. Although Logue says this version of “Fruitcakes” is a rewrite from the original, written by Julian Wiles. “We read the updated version and loved it even more than the first.”

What’s not to love, she says: “It’s chock-full of comedy and pathos, and loaded with Christmas cheer. The choice was easy to make to include this in our current 40th anniversary season.”

The story goes like this: “Fruitcakes” takes place in a small southern town, not unlike Danville. Logue says that includes lots of quirky characters, energetic children and a storyline she feels most families will relate to. 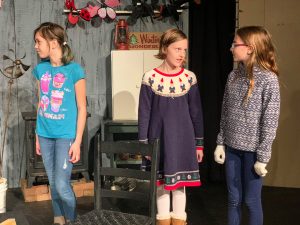 “The setting is Mack Morgan’s barn. He’s sort of the honorary ‘mayor’ of the town and very well liked, warmly played by veteran actor Buck Rogers. A young runaway, played by Aidan Johns, takes refuge in his barn and gets adopted by the entire town, all believing he is someone he is not.” She says the local children’s Christmas pageant is underway, which includes haphazard rehearsals, costumes and props.

“There are two cantankerous old spinster sisters furiously baking nearly 1,000 fruitcakes for everyone in town; a poet-reciting fisherman; a sweet, dizzy gal that’s been married six times; the local sheriff who tries to light up the world; and an outbreak of chickenpox!” Logue says.

She says families will love this production, and most of them will likely compare it to their own busy season they are experiencing “at this very moment. But everyone, young and old, should leave with a good, warm feeling.”

Logue says as usual, there were tons of children to choose from for roles. “We have a lot of new youngsters in this, and a lovely new adult actress that everyone will enjoy.” This is Jackie Feistritzer’s debut on the West T. Hill stage. 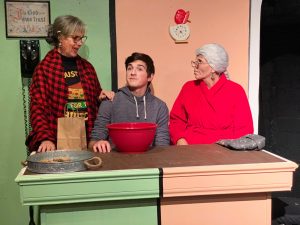 “I really hope audience members will enjoy the pure simplicity of this show — there is some real substance to it, as well — and the great way the characters come to terms with the underlying issue is both beautiful, tangible and, most importantly, possible,” Logue says. “I hope they will enjoy an evening of theatre and leave with warm feelings.”

The rest of the crew includes stage assistants Danielle Burke and Christina Sorrels; lights and sound by Chuck Taylor; and Reinhart, who not only acts but doubled as set design and construction. 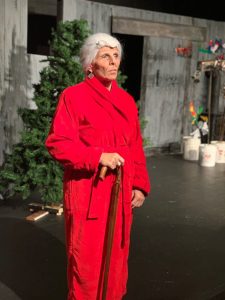 Mary Carol Porter is unrecognizable in her makeup as Miss Sarah in “Fruitcakes.” (Bobbie Curd photo)