Rebels aim to finish the mission on Saturday 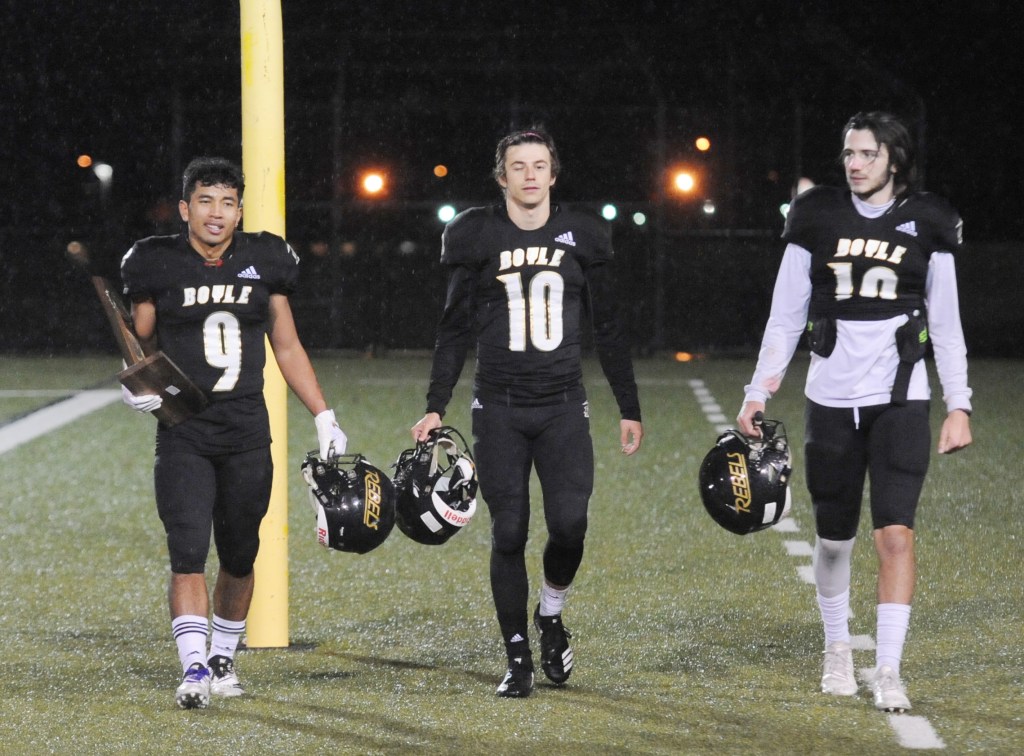 Reiley Colwick (9), Gray Rahbany (10) and Reed Lanter (19) are the last to walk off Rebel Stadium's field after last Friday's win to advance to the state championship game. (Photo Derek Brightwell)

Boyle County vs Johnson Central felt like it was always going to be the Class 4A state championship game, and sure enough, that’s who will be lining up opposite of each Saturday at Kroger Field.

“I definitely think the two best teams made it,” Boyle coach Chuck Smith said. “They’re one of the better teams we’ve played in years around here.”

The Golden Eagles enter Saturday’s clash unbeaten — just like the Rebels — and boasting both a top five offense and a top 10 defense — just like the Rebels. Statewide, Johnson Central has the second best point differential behind only — you guessed it — Boyle County. Sunday’s 6A clash might be the main event of championship weekend, but Saturday’s 4:30 showdown might be the one to feature the two best teams in the state.

“They’re very good. They’re very physical. They come off the ball — both sides of the line of scrimmage — like there’s no tomorrow,” Smith said about the Golden Eagles. “They’re very aggressive, very tough. They’re well coached — they know where they’re going and what they’re doing. It’ll be a tough task.”

Johnson Central’s rushing attack is tops in the class — accumulating 4,256 yards on the year for an average of 304 yards per game. The Rebels enter play with the class’s best rushing defense, surrendering only 554 yards in 14 games — a 40 YPG average.

When Boyle has the ball, the advantage gets flipped. Led by the Reed Lanter to Reese Smith connection, the Rebels have the sixth best passing attack in the state. Those numbers might be skewed by the fact that Boyle has had running clock leads for all but two of their games. Johnson Central’s ranking of the fourth best 4A passing defense is more impressive when you consider that they’ve also had big leads in almost all of their games.

“When you get this far, I think you just kind of do what you do,” coach Smith said. “They’re going to do what they do and we’ll do what we do and you’ve just got to do it better. When you think about gameplans, that’s what you’ve got to think about. They’ll have some wrinkles and we’ll have some wrinkles, but at the end of the day it’s going to come down to the team that really wants it the most.”

The similarities don’t end at just the domination on the field. Coach Smith turned Boyle County into a perennial powerhouse, and led the Rebels to five straight championships from 1999-2003, and a sixth straight appearance in 2004. Johnson Central’s Jim Matney took a struggling program and built them int the powerhouse that they currently are — with Saturday being the Eagles’ fifth straight trip to the title game.

The Rebels are coming off a year that they would consider to be disappointing after a loss in the semifinals to Corbin. After that game, and all offseason, the senior class were determined to go out on top and adopted the motto “Finish the Mission.” But their counterpart on Saturday also has had their share of playoff disappointment. In the previous four trips to the finals, the Golden Eagles have only once brought home the trophy. Coach Smith believes that his team can match their opponents hunger level, but knows what will happen if they can’t.

And if there was any doubt about the focus of the Rebels heading into the weekend, star receiver Reese Smith is here to quiet that.

“Our motto was finish the mission and we’re not finished with it. It’s great to be here and everything, but we won’t be satisfied unless we win this game.”