Reese Smith does it all, wins Offensive Player of the Year 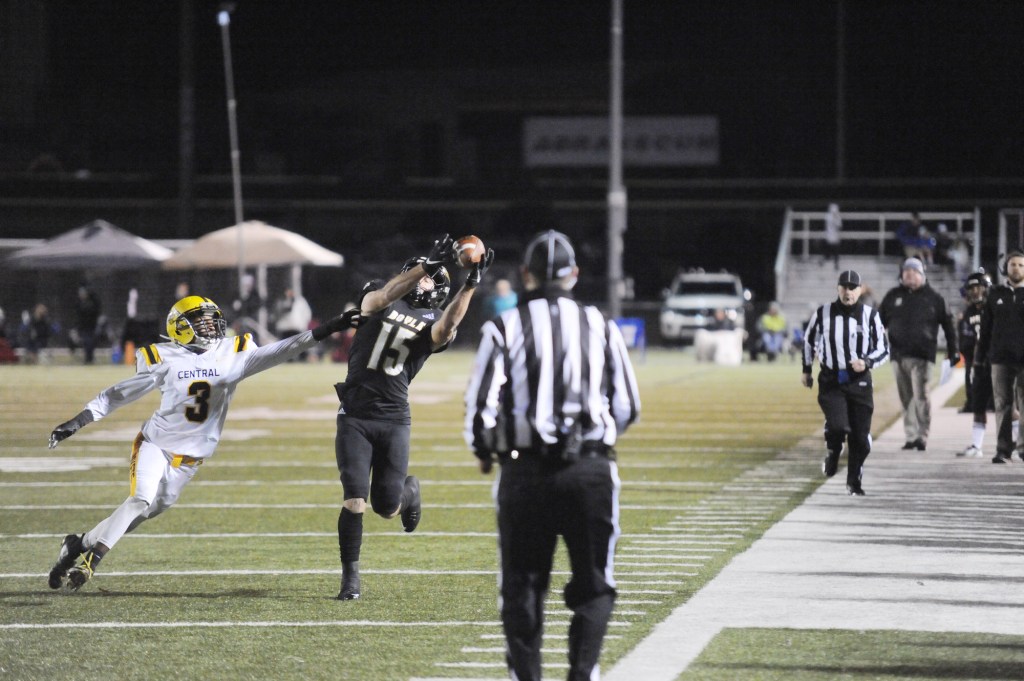 Reese Smith makes an athletic, over the shoulder grab last week against Central. He'd go on to grab his 19th TD of the year a few plays later. (Photo Derek Brightwell)

He could go down as the most decorated Boyle County football player to ever wear the black and gold. In his four years as a starter for the Rebels, Reese Smith has done it all — school records, a state championship, signed to play for a Power 5 school. He can add two-time All-Area Offensive Player of the Year.

Last season, Smith had the rare distinction of winning Offensive and Defensive Player of the Year, and this year he wanted to elevate his game even further. Although that goal was stunted a little bit — individually — thanks to the Rebels jumping out to early leads and the starters coming out after only a half of football.

“Individually, I had some goals. It was tough early on because the starters didn’t play that much — we’d come out at halftime,” Smith said. “It was hard to get tested and know how good we really were. Later in the year we figured out we were becoming a team and we’d overcome some bumps in the road and we’d become a better team.”

“It’s awesome. The guys on that leaderboard are legends. Jacob Tamme played nine years in the NFL,” Smith said. “It’s big time names up there and being in the mix with those guys — it’s really an honor.”

Anybody who has watched Smith play during his storied career or even just a single game shouldn’t be surprised by him winning his second consecutive Player of the Year, and his coach is certainly not.

“He’s had a tremendous — not just this season but a tremendous career at Boyle County,” Boyle coach Chuck Smith said. “He’s been starting since he was a freshman. He’s a playmaker. He loves the stage. The bigger the stage, the more he likes it and the better he plays. He’s one of those ultra competitive kids. He just loves the competition part of the game and that’s what makes him special.”

He gets another shot at playing on the biggest stage as a high schooler Saturday when the Rebels take on Johnson Central for the state championship at Kroger Field in Lexington. Smith played hurt during last season’s loss to Corbin and he and his fellow seniors didn’t want to repeat that feeling in 2019.

“Coming out this year, the team and I wanted to put on a show for everybody and make them realize how much talent we have as a senior class,” he said. “Not only that, how far we came as a family… Overall, I think we’ve got a good chance at bringing home the state championship.”

Smith’s stats alone speak for themselves. He’s caught 51 passes for 1,353 yards and 19 touchdowns. He’s taken seven carries for 128 yards and three scores. And he even has one passing touchdown — a 49-yarder that he completed against Danville.

“We practiced a couple of times that week and coach (Chris) Pardue came up and said we were going to run it first drive. I started to get a little excited and nervous about it — I’d never thrown a pass before,” he said with a smile. “But I got the ball and let it go and I knew the good lord above — if it was meant to be it was meant to be. Luckily it just laid right in his hands. Couldn’t have been more perfect.”

As for his receiving stats, he’s quick to defer credit to his quarterback Reed Lanter and the rest of the offense.

“I couldn’t do that without Reed or coach Pardue calling the plays or the offensive line of course,” he said. “The other receivers running routs or blocking to get me open. All credit goes to those guys. I knew what I had to do coming into this year. I knew I had to perform more than I had in previous years. Heading into West Virginia, I just wanted to end on a good note. I had to come out with a chip on my shoulder.”

But before he can start thinking about Morgantown, he knows that he’s got one more game to play in Lexington. Coach Smith, however, knows how good he’s had it for the last four years.

“He’s got tremendous ball skills. He’s got great speed and quickness. He runs great routes,” he said. “I don’t see any reason why he won’t contribute early in his college career. He’s just a special athlete.”