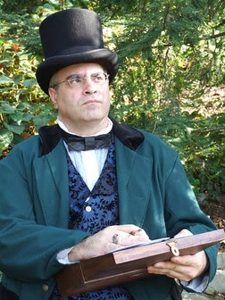 FRANKFORT – Bryan Bush has been named the park manager at Perryville Battlefield State Historic Site, Parks Commissioner Donnie Holland announced today. He is taking over the reigns of the park from Joni House who retired at the end of August.

Bush, a Louisville native, has published more than a dozen books on Civil War and Louisville history. He has also written magazine articles and consulted with museums and film productions on the Civil War.

Bush has been a Civil War re-enactor and served as a board member and curator for the Old Bardstown Civil War Museum and Village: The Battles of the Western Theater Museum in Bardstown.

He is also a board member for the Louisville Historical League and is the official Civil War tour guide for Cave Hill Cemetery in Louisville.

Bush, who has an extensive background in retail, most recently as a supervisor at Home Depot in Louisville, received an undergraduate degree from Murray State University and a master’s degree from the University of Louisville.

Perryville Battlefield in Boyle County is the preserved site of the largest Civil War battle in Kentucky in 1862 that resulted in 7,500 casualties.