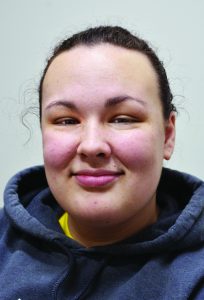 A Kentucky School for the Deaf student has been named to the Kentucky Commissioner of Education Student Advisory Council.

Elizabeth, Holcomb, 16, of Lawrenceburg, is a junior at KSD and decided to apply for the open position representing her school because she wanted to give it a try, she said through an American Sign Language interpreter on Thursday. She’s a member of the KSD Student Body Government, Chess Club, Academic Bowl team, and basketball and volleyball teams, she said. “That’s my life right now.”

Holcomb is one of 11 newly selected public high school council members joining the 11 returning members who will provide input to Kentucky Commissioner of Education Wayne Lewis. The new  members will serve the remainder of the school year. Sophomores and juniors will have the opportunity to serve again in the fall of 2020.

“The Commissioner’s Student Council is a program for Kentucky public school students in grades 10-12. The council is comprised of a diverse group of students with refreshing ideas and thoughtful insight into how public schools and student achievement can be improved,” according to the KDOE news release.

Donna Pace Melton, with KDE, says students were asked on their application to outline what they think are the top education issue facing Kentucky students; why they’re interested in serving on the council; what they would like to see improved about their school experience that would better prepare them for life after high school; and what attributes they would bring to the council.

The first meeting of the council was held on Tuesday in Frankfort. Holcomb said the session included an overview of how Kentucky schools are rated.

The council will meet again in February and May. This first meeting was mostly educational, but the students were asked to give their feedback on several issues, Holcomb said.

What the DOE seemed to be most interested in was how the students thought would be the best ways “to inspire people to become teachers,” Holcomb said, because there is a teacher shortage in the state. Students also suggested that more social media should be used to recruit and retain teachers, by letting them know about special programs, and opportunities to help pay for college and to further their teaching careers.

When council members were asked who wanted to become teachers after high school graduation, a show of hands revealed that Holcomb was the only student in the room who was interested in the profession, she said. “I want to be an art teacher on the high school level.”

Holcomb said she’s already been talking with some of her classmates about what they feel is important changes that could be made throughout all of Kentucky schools. One issue being discussed is if students prefer online testing as opposed to traditional testing on paper.

Holcomb said, “I’m old fashioned myself. I like regular pencil to paper.”