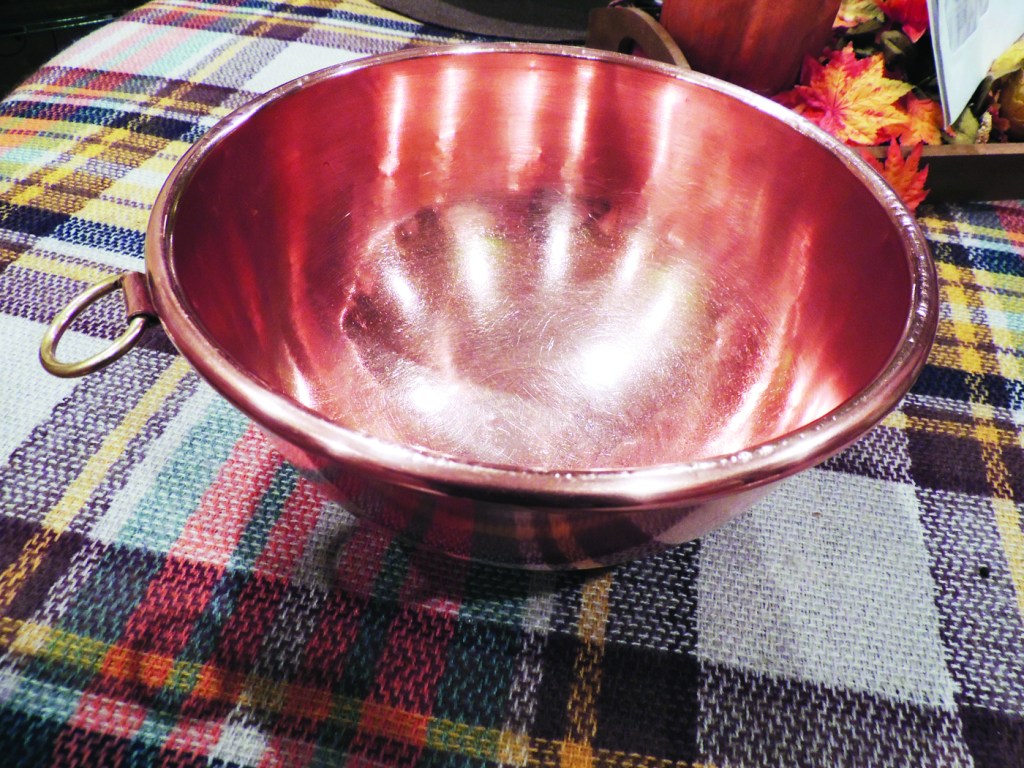 Question: Mr. Sampson, we inherited some copper pieces from my aunt a few years ago. I keep seeing shows on TV that tell about the benefits of good copper in the kitchen. I have a large mixing bowl and a saucepan that I’d like to use. The bowl has no lining on the inside. It’s rounded on the bottom and won’t sit flat. It’s been heavily used and shows many signs of use inside. The saucepan has a lining but it’s worn in several large spots in the bottom, making the copper peek through. Both are marked “Made in France Mauviel” and they are really tarnished. Can I still use them and what would they be worth? Thank you so much.

Answer: Well, congratulations. Thanks to your aunt, you struck the mother lode. Mauviel is one of the most coveted and respected French copper manufacturers in the world. Julia Child owned Mauviel.

You can find their wares at Williams Sonoma and other fine, high end retailers. More

about the values in a minute.

I can tell you that the round bottom bowl is for whipping egg whites. That’s why it’s not lined in tin. There is a chemical reaction between the copper and the whites that causes them to fluff up quicker.

The saucepan is super handy for sauces or just a can of soup. However, the tin lining is in rough shape. One or two small spots are OK, but this is heavy wear. You don’t want to use copper that is in direct contact with ANY acidic foods. It will cause a severe chemical reaction that will taint your food. Repeated use can make you sick. This will need to be re-tinned before you use it. You can Google online to find a place to repair it. As far as I know, you’ll have to send it up North, as no one does it here in Kentucky. It’s not as simple as you would think to apply a tin coating. It’s not cheap, but it’s worth it.

This is a piece you can leave to your children. It’s made for lifetimes of use.

All of these pieces need a good polish. I know, I know, but “Jerry, what about the patina?” A couple of schools of thought here, and neither are right or wrong.

Some people like a well developed, dark patina on their copper. After enough time, it looks like bronze. Some people, like myself, want copper to gleam with that pinkish glow, the way that it did in the mansions of the robber barons.

These pieces are not terribly old or historic, so polishing won’t make a big issue with them. Choose your own corner.

Now to value. In the retail arena, these pieces are expensive. The egg white / mixing bowl I found, the new examples were priced anywhere from $100 to $150. The saucepan in this size started at $225.

In the secondary market, like antiques shops, they’ll be cheaper, but unless it’s being sold by

an inexperienced seller, it won’t be dirt cheap. These things are high quality and were made to be used and enjoyed. Make the investment to re-tin the saucepan, polish or don’t polish, but use them.

Thanks for a great question.