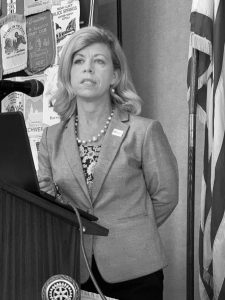 If you grew up as a Kentucky student prior to the state’s landmark education reforms in the 1990s, that refrain followed you through your academic career. Kentucky’s history of public education was distinguished by its undistinguished results — near the bottom in virtually every measure of academic performance with only Mississippi (and occasionally West Virginia) propping it up.

As Brigitte Blom Ramsey, executive director of the Prichard Committee for Academic Excellence, told the Danville Rotary Club recently, that all started to change in 1983, when the group began advocating for improvements in public education, including playing an instrumental role in passage of the Kentucky Education Reform Act (KERA).

“The committee members set their focus on helping Kentuckians better understand where we stood nationally, and inspired citizens across our state that we could, in fact, do better.”

As a result of that early work and ongoing efforts in public outreach, community building, and legislative relations, the state has leaped from the bottom of the national rankings to the middle — depending on which indicators are used for comparisons.

Ramsey and the committee are now making a concerted effort to reach out to stakeholders and citizen groups in the state to inspire a renewed movement for the state’s continued progress in education — early childhood through post-secondary.

“We started measuring ranking improvements in 2008 when the committee launched a campaign called the ‘Top 20 by 2020,’” said Ramsey. “In a variety of our indicators, we have made it into the Top 20; but we have hit a plateau and are beginning to decline, beginning to fall in some key areas.”

One such measure saw Kentucky ranked eighth in the nation in fourth-grade reading (2016) and drop to 22nd after this year’s test scores were published.

“(Likewise), we don’t have a post-secondary rate that meets the future economy that demands that at least 60 percent of Kentuckians have a degree or credential,” Ramsey said. “We’re at about 45 percent.”

On the other end of the spectrum, preschool enrollment is also in decline.

“How many of our little ones are in high-quality learning environments in the first five years of life?” Ramsey asked. “We’ve dropped from 24th in the nation in 2008 to 41st today.”

Ramsey pointed out that as she and others are meeting with legislators, they can cite that there are good things going on in the state, but that resources aren’t flowing as they should, which is another opportunity for civic engagement. Kentucky currently ranks 38th in per pupil spending for K-12 education.

“We have been shopping a concept with legislators for a multi-year investment in education—an ask of one billion additional dollars for early childhood through post-secondary education by the end of 2026.

“Post-secondary will be our next big play. If we don’t get more of our young people to post-secondary attainment that gives them entry into a family-sustaining career, we’re not fixing the system.”

Anyone interested in finding out more about the Groundswell Initiative or in signing on as a supporter can go to http://groundswell.prichardcommittee.org.