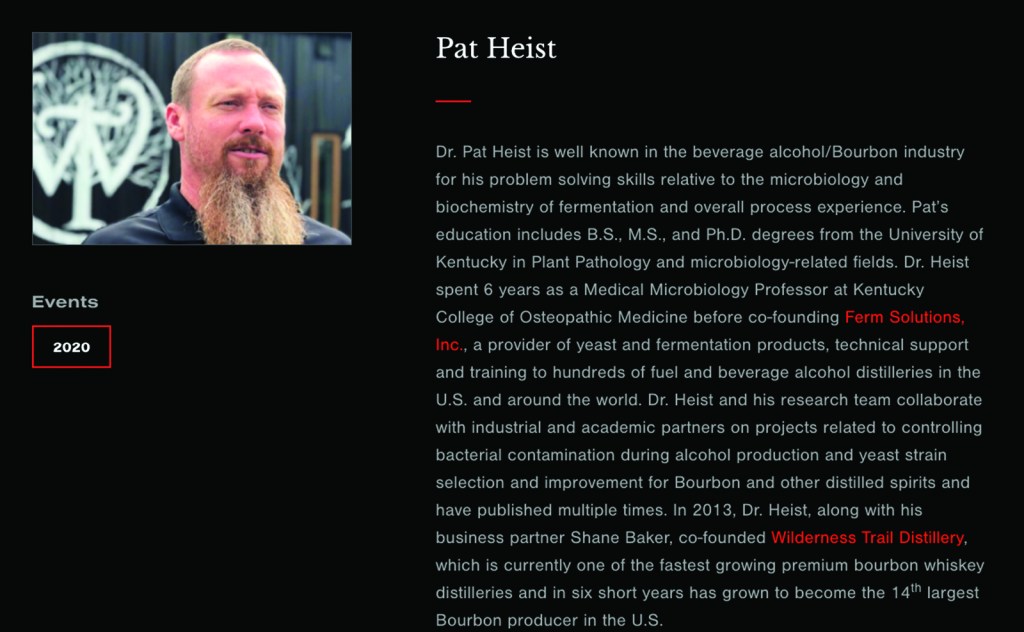 It’s always interesting and entertaining to interview Dr. Pat Heist of Wilderness Trail Distillery. So, if his upcoming TEDx talk is anything like our phone interview, audiences should be in to it.

Thursday, Heist was getting ready to jump on board a plane headed to San Francisco; California is just one of the many new markets WTD bourbon has been recently picked up in, including Washington, Nevada, Arizona, Texas, Florida, Georgia, Illinois and Ohio. We agreed to wait until he could get in range of a decent airport bloody Mary before we spoke — something interviewers always appreciate in their subjects; relaxation brings an easy conversation.

But Heist is always straight forward about his company, his love for bourbon and the distillation process. He even confesses he’s nervous about stepping on stage in front of a live audience.

“Well, I’m a lecturer; a pretty seasoned one. I wouldn’t say I’m ‘intimidated,’ but I’ve been nervous over this one a little bit.”

Who wouldn’t be. TED talks have taken over YouTube, and communities across the world. It stands for “technology, entertainment and design,” which was the type of conference the event began at in 1984. Today, the non-profit pulls in interesting, innovative speakers to give impactful, short talks on diverse topics, now in more than 100 languages.

Heist’s talk on how climate change can affect the bourbon-making process will happen Feb. 29 at the Reno-Sparks Convention Center in Reno, Nevada, organized by the University of Reno. He’ll be on stage in an auditorium seating up to 1,700 audience members. 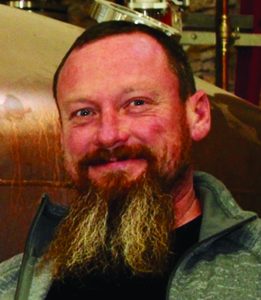 Yeah, he’s nervous, but Heist says he’s getting prepared. TED hooks their invited speakers up with coaches. “They want to prepare you to give the talk of a lifetime,” he says.

As far as the topic — how climate change can affect the bourbon-making process — he says, “I’ve got the bourbon part covered, but over on the climate side …”

Don’t let him fool you, he’s no dummy. After he graduated from the University of Kentucky’s Ph.D. program in plant pathology, he began helping farmers with crop diseases, but his first job was as a medical microbiology professor at Pikeville College.

“Microbiology, that’s my thang,” Heist says in his southern twang. “Shane (Baker, WTD co-founder and owner) is an engineer. I’m a microbiochemist, so we’ve covered all those bases.”

It was a big leap for him, coming from plants to human diseases caused by microorganisms, but he did it. So, like any other red-blooded scholar, Heist began digging into the topic of climate change right off the bat, piecing together some good talking points; ones that don’t go too in-depth, but enough to get his point across in 10 minutes.

His coach actually sent him a publication to reference from, which turned out to be pretty serendipitous for Heist. “It was a publication from U.K. Ag Extension, and he said this is the kind of information you want to focus on.”

One of the authors of the publication is the first author Heist ever published with; he used to work under Paul Vincelli, extension professor and Provost’s Distinguished Service Professor. And he had another one of the publication’s authors as a professor.

“So I’ve interviewed them as well, getting some thoughts on some things.”

The TED organization will be focused on the topic of climate change in 2020, with its planned talks under a playlist titled “Climate change: Oh, it’s real.”

Heist says think about it: “95% of all bourbon is made here. Kentucky’s got the best conditions. For growing everything to make bourbon — the corn, wheat, rye … our company sells yeast to distilleries, and the limestone water contributes to healthy fermentation and flavor.”

You could argue, Heist says, that climate change can affect how the plants grow. You might get more off of one crop and yield less off another one, or a crop could be more susceptible to disease … “But really, it’s due to the aging conditions.”

Heist says the temperature and humidity affect how trees grow, trees that will be turned into bourbon barrels. “Since the wood is air dried in the Kentucky air, up to two years, before the barrels are constructed — if it gets real dry, it’ll affect the cure,” which affects the vaporization amount, causing some of the precious, brown liquor to disappear into the air.

“We have customers who have up to 25% loss due to vaporization in their barrels. You’d never get to four years (aged bourbon); you’d not have anything left to humidify.”

Due to temperature fluctuations common in Kentucky, the hotter temperatures cause the wood to expand, Heist says, in turn pushing more of the bourbon into the wood. “Expansion and contraction of liquid in the barrel, pushing in and out of the wood, the chemical reactions that occur lend to the very distinct notes — the vanillas, the caramel, nutmeg.”

Heist goes on to explain the connection, which was nothing short of a mini TEDx talk — real, entertaining and incredibly interesting. He can weave a story.

But his head is not inflated, and it’s in the game. Heist is ready to not only jump into the opportunity to showcase WTD’s bourbon knowledge and get their name further out there, but he is pretty hyped about showcasing “our hometown.”

“And the Kentucky Bourbon Trail, the Kentucky Distillers Association … That’s another side of benefits, if it gets millions of views, anybody who sees that will think about Danville, Wilderness Trail Distillery, the University of Kentucky …”

Heist pauses for a second then lets out a sigh. “Now, all I’ve got to do is a good job.”

I ask Heist what he plans to wear on stage. “You know what? That’s a dang good question. Everybody who knows me knows I’m not a fashion guru. I’ll have to advise with my inner fashion circle …”

Heist’s TEDx event is listed at tedxuniversityofnevada.org. It will be recorded live and broadcast at a later date, but tickets are for sale to the day-long event, featuring 23 speakers.