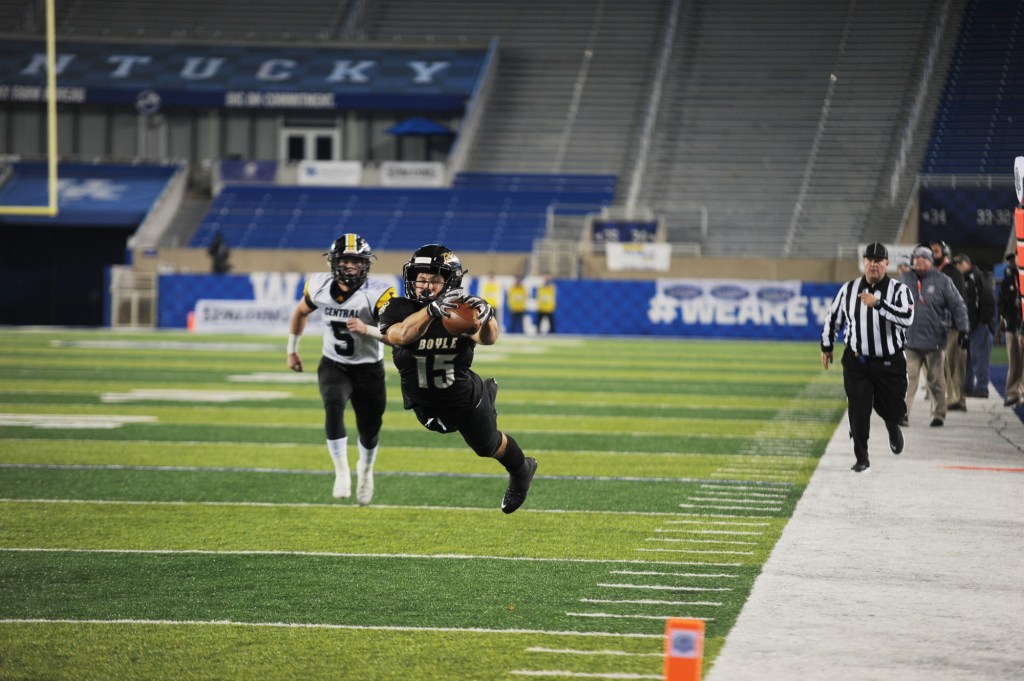 Boyle County was an unstoppable force all season. On Saturday, they ran into the immovable object that is Johnson Central. But the Golden Eagles got some help in the way of five Rebel turnovers.

But even still, the Rebels were still in it as time was running down in the fourth quarter. But a 4th and 2 pass to Reese Smith was knocked down by Cody Rice to clinch the victory for Johnson Central.

“I thought going into the game, it would come down to the final minutes. I didn’t expect us to have those turnovers,” Boyle coach Chuck Smith said. “That hurt us. They just made the plays and we didn’t.”

It started like a typical Boyle game. After stopping JCHS on five plays in the opening drive, the Rebels went for the quick score to open their first possession.

With quarterback Reed Lanter lined up out wide and receiver Reese Smith taking the snap, the Rebels busted out a trick play that saw Smith throw a lateral to Lanter who circled back while Smith leaked out. The two connected as they had all year for a 39 yard strike, but Dillon Preston poked the ball out of Smith’s hands and Grant Rice fell on it to give the ball back to the Golden Eagles.

“I caused some turnovers that cost the team some points,” Smith said. “I had that fumble to begin the game and you just can’t do that to win a big game.”

But they weren’t able to do anything with the ball, but did run nearly five minutes off the clock. And when the Rebels got the ball back, they did what they’d done all year.

It took nine plays and three and a half minutes for the Rebels to 67 yards and score. Reese Smith caught three passes from Lanter for 38 yards, but it was Reiley Colwick’s two catches — one for 11 yards and a touchdown from six yards out — that capped the drive off. 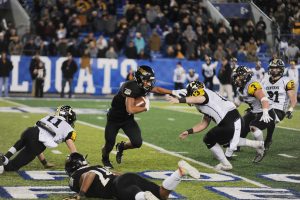 Reiley Colwick had one of the best games of his career Saturday against Johnson Central. (Photo Derek Brightwell)

Colwick had quietly been a super star all season long for the Rebels and he put on a show on the final game of his high school career. The senior led the team with 14 catches and had 133 yards and a touchdown. Late in the game, when the Golden Eagles doubled Smith, Colwick made key plays to keep Boyle alive.

“He did an amazing job tonight. Reiley stepped up big time when we needed him the most,” Reese Smith agreed. “He’s got that in him — that big play capability — and he definitely showed that tonight.”

The Golden Eagles caught another break in the second quarter when they were forced to punt. The ball hit off Colwick’s foot and Johnson fell on it at the 27. It only took two plays for the Golden Eagles as Devin Johnson broke free for a touchdown to even the score.

From there it was a relative offensive explosion.

Boyle took the next drive down the field in 12 plays and four minutes. Will McDaniel was the star of that drive, rushing for 33 yards on seven carries. But it was the last two runs that stood out. He appeared to be stopped at the five yard line but literally threw the defender off of him before diving for what appeared to be a touchdown but was ruled down at the 1-yard line. On the next play, they let him finish what he started as he fell into the end zone to give the Rebels the lead back.

Johnson was quick to answer back with a nine play drive that only took two minutes. Quarterback Riley Preece had the highlight of the drive when he escaped Wilson Kelly’s sack and then broke free down the sideline for 31 yards before Reese Smith knocked him out of bounds. From there, it only took two more plays for Preston to get in the end zone and tie the game up at 14, which would be the score going into the half after Lanter’s heave to the end zone was intercepted as time expired.

Going into halftime tied despite four turnovers — three if you exclude Lanter’s end of the half interception — the Rebels had to at least feel good about their chances in the second half.

But the first drive ended when a pitch to Landen Bartleson ended up on the ground and in the hands of Johnson’s Mason Lemaster for Boyle’s fifth turnover.

But Boyle’s defense once again rose to the occasion to stop the Golden Eagles offense. But two drives later, Johnson broke through again. Preece connected with Seth Dalton for a big 46 yard completion to set up the Golden Eagles on the Rebels’ 12-yard line and Cody Rice took it to the house on the next play. For the first time all year, the Rebels trailed in the second half.

If anyone was wondering how the senior-laden team would respond to its first late game deficit, they didn’t need to wait long.

The Rebel offense put on an impressive 77-yard drive that took 12 plays and almost four minutes off the clock. Reed Lanter threw for 88 yards on the drive — a holding penalty backed the Rebels up to start the drive — including a 24 yard completion to Reese Smith who made an incredible diving catch. Lanter found Smith again for a three yard slant in the end zone to pull Boyle within one point. And that’s where it would remain as the extra point attempt was no good to the right.

From there, it was a game of keep away.

The Golden Eagles again leaned heavily on their running game to milk three minutes from the clock on five plays before surrendering it back to Boyle. The Rebels couldn’t get anything going and went three and out and Johnson ran it down to 2:53 with their next drive.

“They’re a great run team. They do what they do very well,” Reese Smith said. “They’re some big boys up there and they just play smash mouth football.”

On the final drive of the game, Lanter would go back to the guy who’d made the plays all game — Reiley Colwick. But it was the 4th and 2 that decided the game, and as the ball hit the ground, the Johnson Central sideline erupted in cheers.

For the Golden Eagles, they claimed their second state title in five trips to the finals. The Rebels close out their first season in Class 4A with a 14-1 record.

“They made the plays when they needed to and we didn’t do it,” coach Smith said. “It really came down to that in the end. Our guys, they played hard, they had a great season.”

Boyle County was a team loaded with senior leadership and for those 19 players, Saturday’s loss was the final game of their high school career. Chuck Smith reflected on what that group meant to the program and him personally.

“They’re a great bunch of seniors. I love them to death. They had a great career, they played their hearts out,” he said. “Being the runners up like this is okay. They’ve had a lot of wins. They just didn’t have the championships they wanted.”

For Reese Smith, despite the fact that he’ll be playing at the next level for West Virginia next year, his career at Boyle County was the fulfillment of a childhood dream.