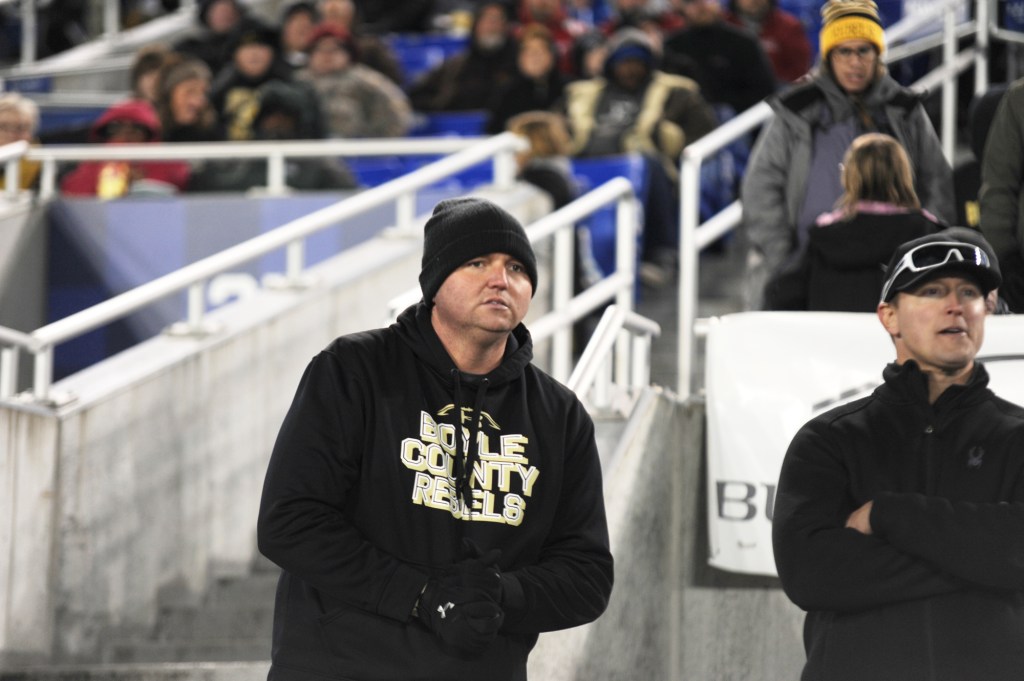 Saturday’s game didn’t go how the Boyle County football team would’ve wanted, but for one player, stepping on the field for his last game was bigger than football — it’s a family tradition.

Senior Wilson Kelly has worn the number 73 for his entire four year career on the offensive and defensive lines for the Rebels. He wears it to honor his uncle Dustin, who after his sophomore year wasn’t sure he’d be able to suit up for the Rebels again.

After his sophomore season, Dustin was diagnosed with Hodgkin lymphoma and had to sit out his junior year — the year the Rebels won their first state championship.

“It was about the second or third week in November, we’d just gotten beat in the playoffs. I felt a knot in my neck and I was talking to my parents about it and I just thought I tweaked it in practice or did something in a game,” he said. “But when I went from 195 pounds to a 175 down to a 155 and ended up at 135 in December, I knew something was up.

“They thought it was mono or whatever. I ended up getting a test done and they knew what it was right away. Went through six weeks of chemotherapy. I finished my last one in July of my junior year. I tried to come back to football in August. But I was scared, coach (Chuck) Smith was scared. We were all scared.”

Dustin said that it was an amazing feeling to see his teammates win the school’s first title that year, but the next year was even better because he was out on the field with them.

A few weeks after his final game as a Rebel, Dustin had another special moment — the birth of his nephew, Wilson.

For the Kellys, football has been a part of their relationship for almost all of Wilson’s life. Dustin was his coach all through youth football, before he went on to play for Chuck Smith — just like his uncle did.

“He’s probably my favorite coach,” Wilson said. “He and my dad coached me at one point. He’d tell me one thing, my dad would tell me another — so I’ve got two different family members getting on me. I liked him better. He taught me so much when I was little. It was just so fun and it’s something I’ll never forget.”

For Wilson — who wears the same number and plays the same position as his uncle — the relationship goes deeper than just on the gridiron.

“As a coach, he was a little hard on me but we had fun with it. He made me where I am today,” Wilson said. “As an uncle, he’s the closest one I’ve got in my family besides my immediate family. We can talk about anything, do anything.

“We’re always around doing something — cutting up, talking on the phone. He’s just fun to be around and we get along great. We help out my grandpa a lot and we just always have a good time doing what we’re doing.”

Dustin said that he has been able to impart some of what he learned while battling back from lymphoma onto Wilson through his life.

“Being able to go from having chemotherapy and be around all these people who have it way worse than I did and coming back as a 17-year-old and play football again — something I love,” Dustin said. “It was a struggle — but I try to leave this on him as a kid and even now — there’s always people way worse off than you are. If you sprain an ankle, well there’s someone over here who’s fighting for their life.”

As Wilson looks back on his career — which includes a state title his sophomore year, two-time Lineman of the Year and a scholarship to play for a Division I college program — he also reflects back on his uncle, whom he almost never got to meet.

“It’s more than important to me. It’s family. It’s all you got. Every Christmas, we’d go through old pictures and there’s one of him holding me when he got through chemo. I was little bitty and having him hold me, it’s something special.”