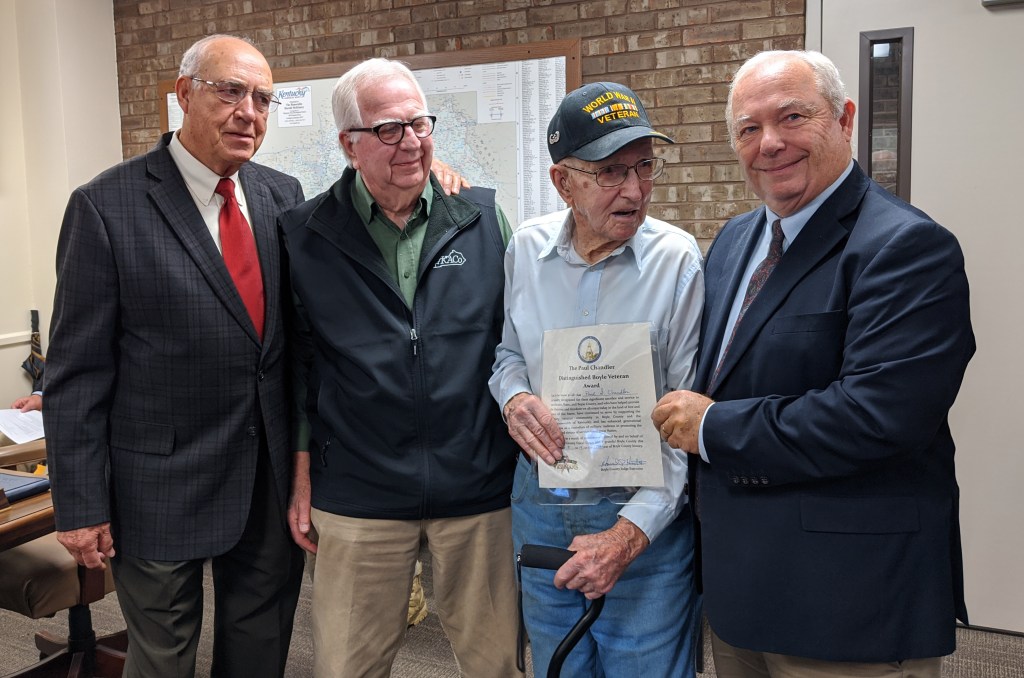 The award “recognizes those who have helped provide the liberties and freedom we enjoy today in the land of (the) free and home of the brave, have supported the military veterans community in Boyle County and the Commonwealth of Kentucky, and has enhanced generational awareness as a custodian of military tradition in promoting the history and virtues of military service to our great nation,” according to information from the fiscal court.

Chandler was on-hand Monday to be presented with his award by Judge-Executive Howard Hunt and magistrates John Caywood and Phil Sammons, all three of whom are military veterans.

Chandler was drafted into the U.S. Army on Nov. 28, 1941, nine days before the bombing of Pearl Harbor. He was a member of the 82nd Airborne Division, 325th Glider Infantry, which landed in the Normandy region on June 6, 1944. He helped liberate St. Mere-Eglise in France and fought in Africa, Sicily, Italy, England, France, Belgium and Holland during World War II, according to the fiscal court.

Chandler was part of a force that liberated a Jewish concentration camp in Belgium, according to Advocate-Messenger news archives.

“The accomplishments of Paul Chandler brought great credit upon himself, the United States of America, the Commonwealth of Kentucky and Boyle County,” according to information about the award.

The award can be given by the fiscal court to any military member or veteran who has honorably served in the military, and has either lived in or currently lives in Boyle County.