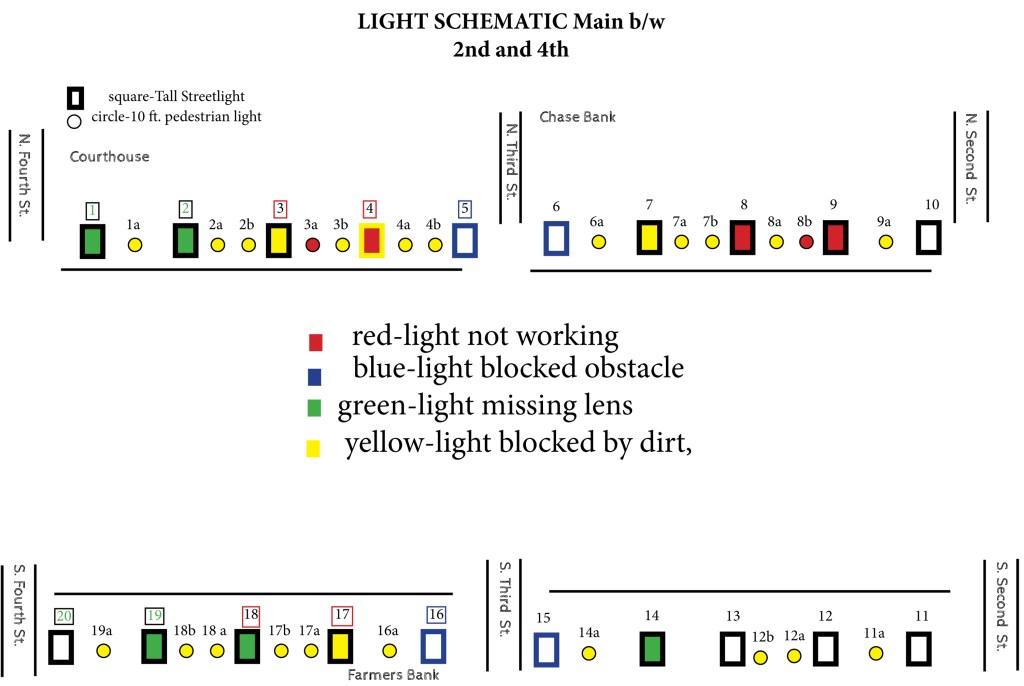 A report given by Lori Finke, a Danville resident and professional lighting expert, to the Danville City Commission Monday night shows the areas on Main Street which she finds troublesome as far as lighthing for pedestrians go.

Valerie McMann, chair of the Heart of Danville Board, thanked the City of Danville Monday night for recent work it has obviously done on downtown lights. The last time she approached the commission, she let them know she strolled down Main Street and counted 20 lights out.

“I understand there are only three lights out now,” McMann said.

She also thanked City Manager Ron Scott for agreeing to keep the tree and holiday lights on through the end of January in order to help visibility.

However, she said a recent incident she was told about — when a man fell while walking on a downtown sidewalk during the Christmas parade festivities Saturday night — gave her more reason for concern. She said the man had tripped and injured himself, “and part of the reason he had fallen was because of the darkness.”

Many in the community have been speaking up about the need for downtown safety improvements since recent vehicle vs. pedestrian wrecks, including one fatal collision, brought the issue into the spotlight.

She said the group has done research and wanted to present findings on three major ways “we’re looking at to improve pedestrians’ safety.”

She said members of the group walked Main Street, numbering each light “so we could refer to that light’s issues.” 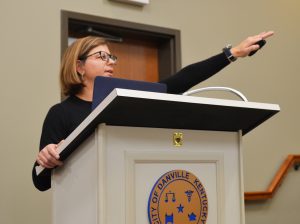 Lori Finke, a local lighting professional, explains photos taken by the local CUPIDD group Monday night during the Danville City Commission meeting. Three members of the group took to the streets, walking between Second and Fourth on Main to document what they say are troublesome areas of lighting for pedestrians. (Bobbie Curd photo)

Spoonamore introduced Lori Finke as a Danville native and architectural lighting professional with clients across the country, to go through the rest of the findings and offer some recommendations.

Finke said she was not getting paid for her work — “it’s just something I want to do to help.” She said in their research, “mainly we’re focusing on between Second and Fourth,” because streetscape projects have already improved lighting to the east and west of that stretch.

She said streetscape work has resulted in “nice, beautiful streetlights with optics, pedestrian level and above” along the other portions of Main Street.

Finke said between Second and Fourth, there are two layers of light — one at the pedestrian level and the street light, higher above.

She said according to her research, it’s been about 15 years since those lights were installed, and there are currently “a lot of problems happening with the lights,” but she added she wasn’t there to point fingers at anyone.

Later in the meeting, Municipal Utility Engineer Earl Coffey said it was actually the 1980s when the lights in question were installed, and they were put in using a substandard electrical system.

Finke showed pictures of boxes with lenses missing, some with lights out and “filthy” fixtures that are “full of bugs.” Due to changes made to the lamps over the years, she said they are basically equivalent to having a 60-watt light bulb, which doesn’t give a lot of light.

Due to the custom design of some of the other lamps, it will be a bit more difficult to replace them, she said, and some have lenses missing, which function to spread the light.

“It seems like Danville has added lights haphazardly around town,” she said, pulling up a photo showing the corner of Main in front of Chase Bank, at which only one area is lit brightly.

She showed many other photographs taken at night, where the only thing visible is the bright light at the top of the pole, however it’s difficult to see the pedestrians walking below them.

Some illumination from lights is also blocked due to being above the banners on Main Street, while lights were added in other areas “right above the street light, so what are we lighting? We are lighting that pole.”

Finke said rather than repair existing, outdated pedestrian lamps, the city should invest in new technology with “new post toppers,” and gave an example of one such fixture she said has great optics and a range of color temperatures. They would be mounted on top of the existing light poles, for a cost of about $407 each. Finke estimated would cost the city about $9,500 to do all of them.

She said she realizes that area of town is in a future streetscape plan, but due to recent incidents, more needed to be done.

“We can’t do a band-aid fix; a new brighter bulb will not fix our problems,” she said. Finke said she can get a sample of the light “for us to fire up and try as early as in two to three weeks.”

Other recommendations included looking into replacement lamping for tall streetlights, and  advocating for “light path” lighting/crosswalk fixtures in conversations with the Department of Transportation.

Finke showed photos of some different types of crosswalk lighting used in other cities, like solar powered ones that illuminate day or night if someone’s walking in the path.

Finke gave more suggestions: create a maintenance schedule checklist for the downtown lights; appoint an employee to be head of lighting maintenance; and keep an open mind about supplemental lighting with future plans due to new technology available to light public spaces.

Finke also suggested the city should consult with a lighting professional on the new streetscape plan for the problematic area, in order to “incorporate the latest technology.”

She said the city should also consider doing “group relamping,” where when one light fails, they are all replaced because they were most likely bought and installed at the same time.

“It’s cheaper to do it once rather than trying to do it every once in a while,” she said.

Mayor Mike Perros said he encourages everyone to email or write a letter to Rep. Daniel Elliott and Sen. Rick Girdler “because we need to have a conversation with the new secretary of transportation, Jim Gray. And the protocol of that is — they’re the guys to get us that appointment. Once we get in the door, I feel we can have a productive conversation about the entire situation.”

Perros pointed out that Danville has “applied and been turned down twice for our streetscape application, which would cover Second to Fourth,” which he finds amazing it would not be approved since “it’s the centerpiece of our whole town.”

Coffey said the street lights on Main Street belong to the city and they do have a maintenance schedule for upkeep. He said the biggest obstacle they have with making those improvements is how limited the aging electrical system is, but he welcomed a sit-down with Finke to talk to her about the ideas.