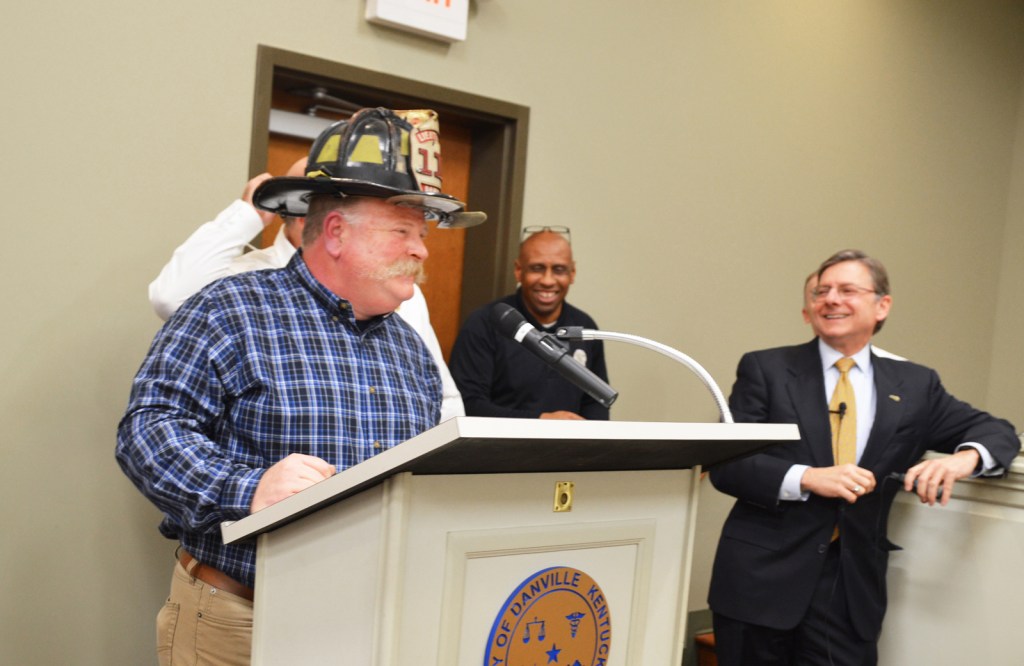 Dep. Chief Tim Brumfield decided to wear his fire helmet as soon as it was given to him in honor of his retirement Monday night.

Deputy Chief Tim Brumfield said he and his brother used to race each other as kids, to see who could get dressed to go fight a fire the quickest. He gave some parting words Monday night as he was honored for his 20 years on the Danville Fire Department.

‘Part of this brotherhood’

Brumfield grew up in a firefighting family. He told the commission and audience that his grandfather “started this rodeo” back in 1946, which then led to Brumfield’s father becoming a chief, now retired. His brother retired as a fire chief out of Nicholasville.

“I used to come over here as a kid with my dad, and we’d stop in at the firehouse … I always thought it was a neat place then, and to be able to come to work a career here … I’ve been blessed,” he said.

Fire Chief Ken Pflug said Brumfield came on with the department in November of 1999, and held many positions before becoming deputy chief. 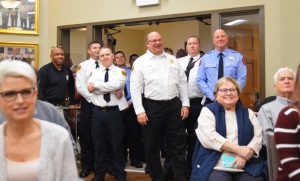 FIre personnel laugh after Mayor Mike Perros points to the back of the room and jokes, “That’s an intimidating group right there.” The firefighters were gathered to pay homage to Dep. Chief Tim Brumfield who retired from the Danville Fire Department. Sgt. Sam Butler, who retired from the Danville Police Department, was also honored. (Bobbie Curd photo)

Brumfield also gave thanks for the firefighters he’s had the privilege of working with. “We give kids a hard time nowadays … but let me tell you, we’ve got such bright, smart kids here that’s come into the fire service … we see some of the best come through here.”

Battalion Chief Mike McCurdy began his goodbye to Brumfield by reciting the “Fireman’s Prayer” to an attentive audience: “When I am called to duty, God; whenever flames may rage, give me the strength to save some life, whatever be its age. Help me to embrace a little child, before it’s too late, or some older person from the horror of that fate. Enable me to be alert and hear the weakest shout, and quickly and efficiently to put the fire out. I want to fill my calling and give the best in me, to guard my neighbor and protect his property. And if according to your will I have to lose my life, please bless with your protecting hand my children and my wife.”

McCurdy said the prayer makes him think of Brumfield, who “was called to this profession; he came by this naturally, of course.” He said Brumfield has made a huge impact on the fire department.

McCurdy said Brumfield has spent much of his career training the next generation of firefighters. “Some of them you’ll see here tonight, and I’m one of them …”

Mayor Mike Perros jokingly referred to the standing crew of firefighters at the entrance of the commission room, saying, “That’s an intimidating bunch right there,” which brought in laughter.

“I came up saying in my former life, ‘once a Marine, always a Marine.’ The same goes for firefighters. No matter where you go, from now until the day you die, you’ll be part of this brotherhood,” McCurdy said, clearing his throat. Brumfield thanked him.

As Police Chief Tony Gray took to the podium, Brumfield said, “You play on the wrong team …” which garnered a big laugh.

Gray said he and Brumfield began their career with the city around the same time.
“We kind of came up the ranks together and became assistant chiefs roughly at the same time,” he said. The two have had many conversations and worked many scenes together, Gray said.

“I’ve always considered him a partner,” he said, and that he has a lot of respect for him. As Gray began to trail off, he said, “I told him we’d make this quick and painless …”

Gray said Brumfield led by example by taking care of the people he was in charge of and who he worked with. “That’s what Tim Brumfield is all about … I will definitely miss our conversations, he’s been somebody I can count on and call and ask things about leadership and just about life in general at times. It’s truly been an honor to work with you, and I appreciate your service.”

Brumfield thanked the city commission, past and present, and said it’s been a privilege to work here. Fighting fires and working for the department is all he’s ever wanted to do, since he was a kid. He thanked his family for being present, including two grandchildren, and added “… maybe they’ll pick up on it someday …”

Last week, Brumfield signed off over the fire department’s radio channel for his last day of service. Multiple firefighters from different battalions tagged in afterwards, each expressing their respect and gratitude for the retiring deputy chief over the airwaves.

‘Just can’t put it into words’

Chief Gray said Sgt. Butler, although a 24-year veteran with Danville PD, has actually been in police work for 27 years. “What do those years encapsulate — you just can’t put into words everything that Sam has done for the city in 24 years, but I’ll touch on a few …”

Gray said, “We all started back in 1995 together — think the city hired about 10 or 11 of us back in those days. Sam is the next to last that’s still here” out of that bunch.

Butler began as a patrolman, Gray said, and also served as a K9 handler. “… a patrol and administrative sergeant. He programmed radios, installs light bars, radars and radio in the cruisers.” He said Butler worked on video cameras, the software system, takes care of uniforms, is a firearms instructor, and administrator for the eWarrant system …

“To say that Sam has done it all is really kind of cutting it short. He’s always on call. If there’s something wrong, late at night, if we’re short on supervisors on third shift, we wait on Sam to come in and take care of that,” Gray said.

He said it’s “not just those technical things he does, it’s the memories … the stories, the car chases, the searches — all those little things. Sam, it’s going to be tough to see you go — 24 years we started together, been on this ride. … and if the governor hadn’t messed things up (with the pension crisis), we probably could have rode it out longer. It’s been an honor and a privilege.”

Butler, who’s known for shying away from the spotlight, gave a quick goodbye. He thanked the city for the opportunity he was given 24 years ago. “I’ve enjoyed my time, I’ll miss the people, but I’ll still be around. I told the chief, if he needs anything, give me a call. Whatever I can do, I’ll help.”

Gray said the PD held its own celebration for Butler last week.