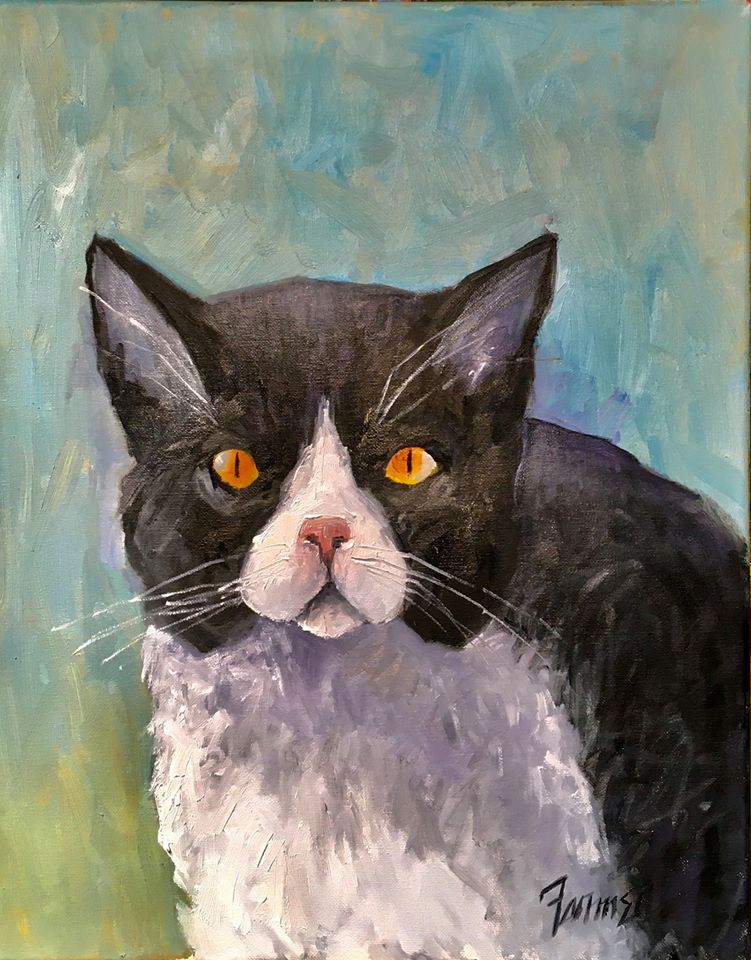 A picture may be known to say a thousand words, but the recent animal portraits by David Farmer are proving highly effective at saying just two — “Adopt me.”

In the fall, Farmer had the idea of donating a painting each month for the next six to the Danville-Boyle County Humane Society. He bounced the idea off of board president Fizzy Ramsey to paint a portrait of an animal that the shelter may have in its care longer than others, in hopes of getting it a new-found home. The adopter of the portrait animal receives the Farmer original for free.

Ramsey was all in on the idea. So far, three animals have been adopted that Farmer created portraits of. And after creating two dog paintings, Farmer just donated his first with a feline subject, “Big Boy.”

Ramsey says also though Big Boy, a lovable 3-year-old black and white “tuxedo” cat was already in the process of being adopted, she feels like Farmer’s work of art only worked to seal the deal.

“He actually got adopted the day she put the image out, but don’t know if that’s coincidence or what the circumstances were,” Farmer says.

Actually, Amanda Falk, a Centre College professor, was in the process of adopting the cat when Ramsey told her Big Boy was the next on the list for Farmer to paint. She says Falk was ecstatic when she found out.

“The look of excitement when she learned of the painting was priceless,” Ramsey says. She says Big Boy was found as a stray, but was always friendly, with a mellow disposition from the start.

“He has a gorgeous face with gray whiskers, dark amber eyes, and his white face-marking makes a perfect upside-down heart,” Ramsey says. “And David perfectly depicted this sweet furball …”

But that’s OK, Farmer says. “Cats have more mystery to them, so the eyes give more of an opportunity to do some experimentation. This cat’s got some amber in his eyes, the yellow. It’s more mysterious.”

Ramsey says she’s been told that Big Boy is already settling in at his new home, slowly working through the introduction period with his owner’s other cats, who were also adopted.

One of his subjects, a black and white dog named Rufus, was also adopted out after his painting was circulated. Ramsey says Rufus — who Farmer affectionately coined the “Panda Dog” due to his black and white markings — is now “enjoying his ‘furever’ home with his active young companion.”

She says Rufus was adopted by Cameron Caruso, and his grandmother, Karen Doyle.

“Rufus was one of the first dogs introduced to our playgroups,” Ramsey says. His behavior was in question because he had been abandoned by his previous owners. Many abandoned animals usually have fear and anxiety to work through.

“As you can see in the picture, he was much loved by his playmates and always sported that infectious smile.” Ramsey says Rufus has settled into his new home and “has the added luxury to curl up with Cameron at the end of the day.”

Finally, Rupert was just adopted last week, Ramsey says, after patiently waiting at the shelter since early July. He had become a shelter favorite “and a playgroup rockstar,” she says.

“He found the perfect family and is now living the royal life with a fellow rescue cat.” 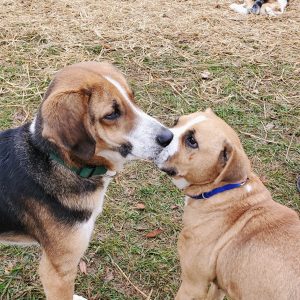 Rupert with his boxer mix friend, Patty – who is still up for adoption. (Submitted photo)

She says his adopters, Julie and Chris Ryan, say he is one of the best dogs and couldn’t believe he wasn’t scooped up before.

“They told me it was just meant to be,” Ramsey says.

Ramsey says Farmer’s initiative has been such a bright spot at the shelter, and has even inspired other shelters to start doing the same.

“We celebrate all adoptions, but the paintings have provided an added element of excitement since these pets were especially in need of a happy new beginning.”

She says they are lucky to have such a vibrant community who values the work put into such a generous gift of local art.

“Ah, well … Just another creature saved by the brilliance of my brush,” Farmer says with his lovable, dry sense of humor. As an animal lover, Farmer has said the donations are important because he wants to give back and help find homes for animals who need love. He’s often commented on the love of this community; how many come out to help walk, play and support shelter animals in ways he’s just not able to right now. This is his way of helping support such a “worthy cause,” as he puts it.

“All adoptions so far (of the painted animals) have been by local community members,” Ramsey says. “So yes, ‘Adopt Local’ at its best.”

Ramsey says since the shelter has received “Playing for Life” training — and is one of only three in the state to get it — the innovative program has made quite a difference. In November, a training was held by DBCHS for anyone who was interested in finding out about the program, which is run through a nonprofit organization that believes in the notion that a dog’s natural instinct is to play. It taught shelter staff and volunteers how to involve shelter dogs in active playgroups as a way for them to less time in kennels. 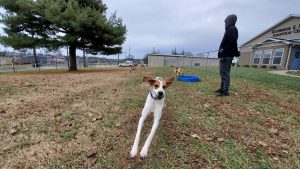 Gertrude, a lively petite hound mix with lots of personality and love to give, plays during playtime. She is still up for adoption. (Submitted photo)

“We can already see the changes this has created,” Christina Lombardo says, the adoption coordinator. She says the shelter is seeing shorter lengths of stay and improved behavioral assessments, which overall leads to happier dogs.

Ramsey says the curriculum — called “Every Dog, Every Day!” — has shown numerous benefits. She says the dogs burn off energy, which counteracts stresses of shelter life and makes them more relaxed when potential adopters come through; and shelter personnel learn critical dog-to-dog social skills and how the pets will be off a leash, helping them adjust better when adopted.

The shelter received the grant to pay for the training through the Petco Foundation and ASPCA, and was selected due to relationships it made with Best Friends Animal Society, and its work done with Dr. Sara Pizano, a national expert who created Team Shelter USA LCC, which works to help shelters of all types and sizes, regardless of their resources.

To find out how to adopt an animal from DBCHS, volunteer or donate, visit dbchs.org.