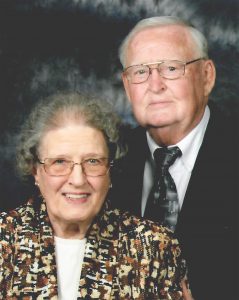 Emma and Bobby Tucker of Danville are celebrating their 65th wedding anniversary on Dec. 17. They were united in marriage on Dec. 17, 1954, at the Immanuel Baptist Church in Lexington, Kentucky by Reverend Wayne Todd.

The Tucker‘s have three daughters Emma Jean (Steve)Tamme of Danville, Linda (Eddie) Ouellette of Birmingham, Alabama, and Bobbie Gail (Damon) Stewart of Danville. The couple have nine grandchildren and five great-grandchildren. The Tuckers plan on celebrating with family later in the month.