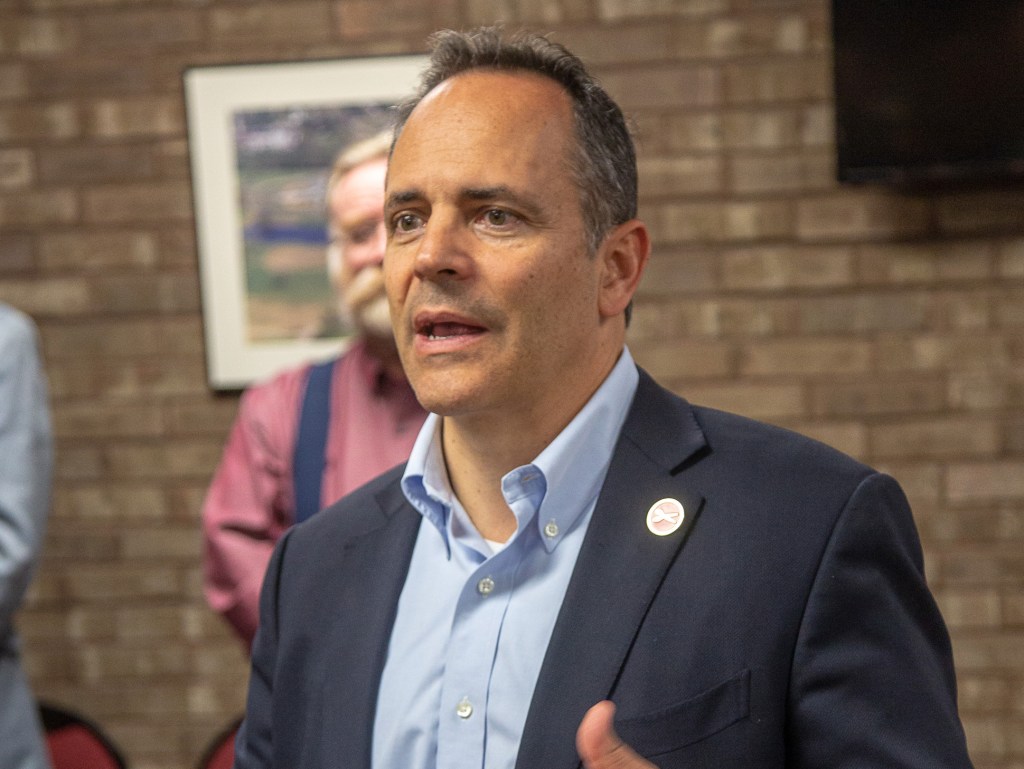 Matt Bevin speaks in Danville during a visit in October. (File photo by Ben Kleppinger)

It’s hard to read or watch the news or glance at social media lately without seeing the firestorm of scrutiny aimed at former Gov. Matt Bevin over numerous controversial pardons he issued among hundreds on his last day in office.

Many of the pardons Bevin made were requests sent to the governor’s office from the Justice and Public Safety Cabinet to pardon a list of inmates “who have been screened and determined to present the lowest risk to public safety.” Many were in jail for trafficking or other drug offenses.

But some made Bevin’s list that the Cabinet did not request. And some of those have ties to this area — like Brett Whittaker, of Somerset, who killed a preacher and his wife after a 2010 Lincoln County incident, when Whittaker was driving with a blood-alcohol level twice the legal limit. He was also on probation at the time of the wreck for a 2006 assault in Madison County.

All three men were pardoned by Bevin.

“Danny Hogue has always maintained the innocence of the charges made against him. No evidence has ever been presented to dispute his claim of innocence. While the charges are reprehensible, they have never been proven to be true,” the executive order from Bevin’s former office, dated Dec. 4, states.

Whittaker is one of five inmates convicted of murder who Bevin got out of prison by executive order just before leaving office himself. News reports say the victims’ families were not approached or made aware of the pardons before they were enacted.

“Like many of the folks in this community, I am very troubled and disappointed by some of the pardons issued by (former) Gov. Bevin,” Speaker Pro Tem David Meade said in a release issued Monday morning. He is the Republican state representative from Stanford.

“Like all governors, he has the ability to give people a chance at redemption, when they deserve it. However, we have to question some of these pardons, and why victims and their families were not notified. My thoughts and prayers go out to those victims and families,” Meade’s release says.

Whittaker was sentenced to 20 years for wanton murder, as well as seven probation violations. According to a 2010 staff report from The Interior Journal in Stanford, Whittaker’s truck crossed into oncoming traffic near the Garrard-Lincoln county line and struck a vehicle driven by Lavanda Rowland. She was killed, along with her husband, John. The Rowlands lived in Berea but were in Stanford to open a new church on Miller Street.

The story said that according to Pulaski County records, Whittaker had an extensive history of alcohol-related incidents and had been charged with numerous offenses since 2002, including DUIs, driving on a DUI-suspended license and multiple charges of public intoxication.

Within his executive order, Bevin said Whittaker changed over the eight years he’s served, and “embodies the best of what society would hope for prison to do for an inmate,” and that he is a new man, ready to return to his community.

On the Bevin’s pardon for Wood, who was sentenced for rape and sexual abuse, it says: “With a conviction based on no evidence other than testimony from the proven rapist and his friend in exchange for a lesser sentence, it is difficult for me to be confident that justice has been served in this tragic case.”

Others with local ties pardoned

Some of Bevin’s pardons drew criticism from across the political spectrum, including from Senate President Robert Stivers, who called for a federal investigation into the pardons.

One of the most controversial pardons was for Patrick Brian Baker, who was convicted of homicide during a home invasion. Baker’s brother and sister-in-law held a fundraiser for Bevin in 2018, according to the Courier Journal.

Bevin also pardoned a man convicted of raping a 9-year-old; a man who was convicted of killing a woman then beheading her; a man convicted for killing both his parents when he was 16; and a teacher who pleaded guilty to possession of child pornography.

In response to criticisms of his pardons, Bevin responded on Twitter last week.

“America is a nation that was established with an understanding and support for redemption and second chances …” began a 20-part tweet from the former governor “This is never an exact science. The entire criminal justice system hinges upon the judgement of third parties.”

Bevin went on to say he’s reviewed “hundreds of applications” for pardons and commutations in his four years in office, as well as reading “thousands of letters.”

“At the end of the day, the responsibility for making pardon and commutation decisions falls on the governor alone. For anyone to question the motives and involvement of anyone else in the administration is highly inappropriate and irresponsible,” he tweeted.

Bevin said he personally wrote “every word of justification” for each of the pardons granted, and “spent hundreds of hours reading every application.”

“Am I perfect? No, never have been. But I did my very best, over many hours, days, weeks and years to reach fair and just decisions.”