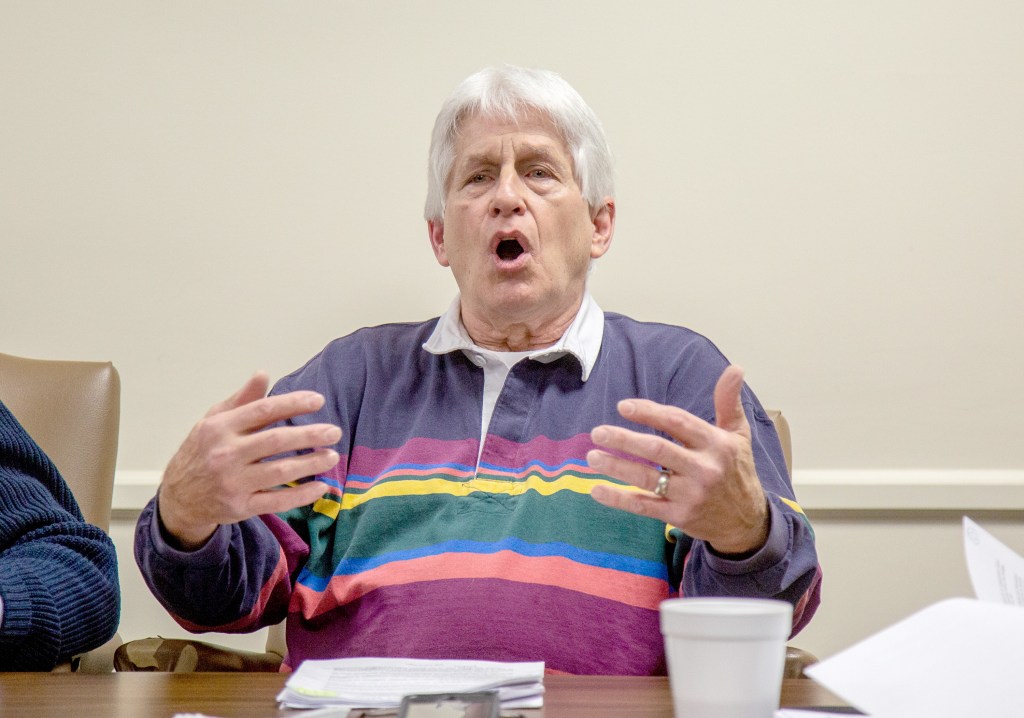 Boyle County Magistrate Tom Ellis goes over 27 issues he wanted to discuss about the parks and recreation proposal from the City of Danville during a special called meeting of the fiscal court Monday morning. (Photo by Ben Kleppinger)

The court made a handful modifications to the proposed service agreement that would redefine how parks and recreation services are managed and funded. Those changes are expected to be reviewed by City Attorney Stephen Dexter and County Attorney Chris Herron in advance of the city commission’s Tuesday afternoon meeting, when the commission could take further action.

The fiscal court also approved numerous edits of typos and grammar issues found by Magistrate Tom Ellis, who brought a heavily edited version of the proposed agreement with him to the meeting.

Ellis backed off of many of his proposed changes after receiving explanations or clarifications from Parks and Recreation Director John Bell, other magistrates or the two city commissioners who attended the county meeting, Kevin Caudill and Denise Terry.

Ellis said he was extremely concerned that the agreement would create or allow for the creation of a two-tiered fee system, under which Boyle County residents not living inside Danville city limits could be charged higher prices to participate in things like rec leagues than those who live inside Danville.

Bell was adamant that Ellis was mistaken.

“I know for a fact that there has been discussion in the city that … citizens outside the city would pay more when we own half” of Millennium Park, Ellis said at one point, eliciting a chorus on “no’s” from Bell and most other members of the fiscal court.

Under “fee structure” in the proposed agreement, it reads, “All fees associated with current facility use and current programming will maintain a consistent fee structure for all Boyle County residents regardless of residency location.”

The agreement does allow for the possibility of future “special projects,” which would fall outside the scope of the proposed agreement. If Danville chose, for example, to build a new aquatic facility and Boyle County chose not to participate in funding that facility, then there could be a separate fee schedule created, in which residents outside Danville city limits who did not pay with tax dollars to build the aquatic facility would pay a higher entrance fee.

Ellis held this up as proof there was indeed a two-tiered system under which county residents would pay more, but no one else agreed with him.

Magistrate Jamey Gay pointed out that hypothetically, Junction City could instead choose to build an aquatic facility, and Boyle County could go in on that project with Junction City. If Danville opted not to fund the project, then there could be a new fee system created under which Danville residents would be the ones who didn’t fund the project and so paid a higher entrance fee.

Ellis also proposed creating a limitation that Boyle County’s appointees to the Parks and Recreation Committee could not live within Danville’s city limits, but the other magistrates were not on-board.

“I think you get yourself in a lot of hot water when you start going down that road,” said Magistrate John Caywood.

Caywood said he objected to Ellis’ proposal because no one from his district, which is entirely within Danville, would be eligible to serve on the committee.

Magistrate Jason Cullen said the county already struggles to fill many seats it’s supposed to appoint people to, and there are others who are appointed but don’t have good attendance records. He said he thinks it would be unwise to further limit the pool of people the county could choose from to serve on the parks committee.

“I concede the point,” Ellis said.

Cullen said he is optimistic that the city and county are close to reaching an agreement and that one benefit will be Bell no longer needing to attend so many city and county meetings, meaning he can be more efficient with his time.

Cullen said he feels like the city and county have been working better together on parks recently in part because John Cocanougher — a long-time parks employee who died earlier this year from a heart attack — would have wanted them to.

“The city has been really good to work with us,” he said. “… I like the spirit of cooperation we have here and I think a lot of that has to do with John Cocanougher.”

The agreement has Boyle County contributing $325,000 (or $322,000 as amended) in order to fund maintenance and programming at all parks in the local system — something magistrates had previously been opposed to, wanting to see the county funding be used only at the centerpiece Millennium Park instead.

Magistrate Cullen said Monday he thinks “we’re getting more now for our money than we have in the past. … Our taxpayers and our citizens will get access to Jackson (Park), programming there, access to other places throughout the city.”

On the matter of hiring parks directors, Danville’s proposal was to let the judge-executive be a participant in the hiring process. The fiscal court said they would like to see a hiring committee of the judge-executive, Danville city manager and chair of the new Parks and Recreation Committee, who could break any ties votes.

Danville’s proposed agreement states that the judge-executive “shall serve as a member of the hiring committee so as to have proper input” in the hiring of any future parks director. “Additional full-time staffing decisions shall be made in adherence to the normal hiring process of the city, which is led by the director of human resources in concert with the city manager, with the involvement of the director of parks, with recommendation ultimately made to the” city commission.

Commissioner Terry brought up that standard hiring process in Danville during Monday’s meeting. Judge-Executive Hunt noted that Terry’s description was “dramatically different” from what the court was discussing.

Magistrate Gay said he is fine with the city handling all other hiring and firing decisions through its normal process, but thinks it’s appropriate for the county to have input on the parks director position.

“I respectfully disagree in one point,” Gay responded. “… if you didn’t formulate the agreement in a way that you liked at the beginning, then you shouldn’t have reached that agreement. I think that this is the part of the process where we’re still negotiating the agreement.”

“But you ought to be very careful about micromanaging,” Terry said.

“I’m not trying to micromanage; I’m just wanting the county taxpayers through the fiscal court to have some say in one position, and that’s the hiring of the director,” Gay said.

“And I agree with that and that would probably be a courtesy,” Terry said. “You want to put that in there, that’s fine, but that’s where it stops.”

“I think we’re getting real close,” Gay said. “So I think we just need to keep moving at this point in time.”