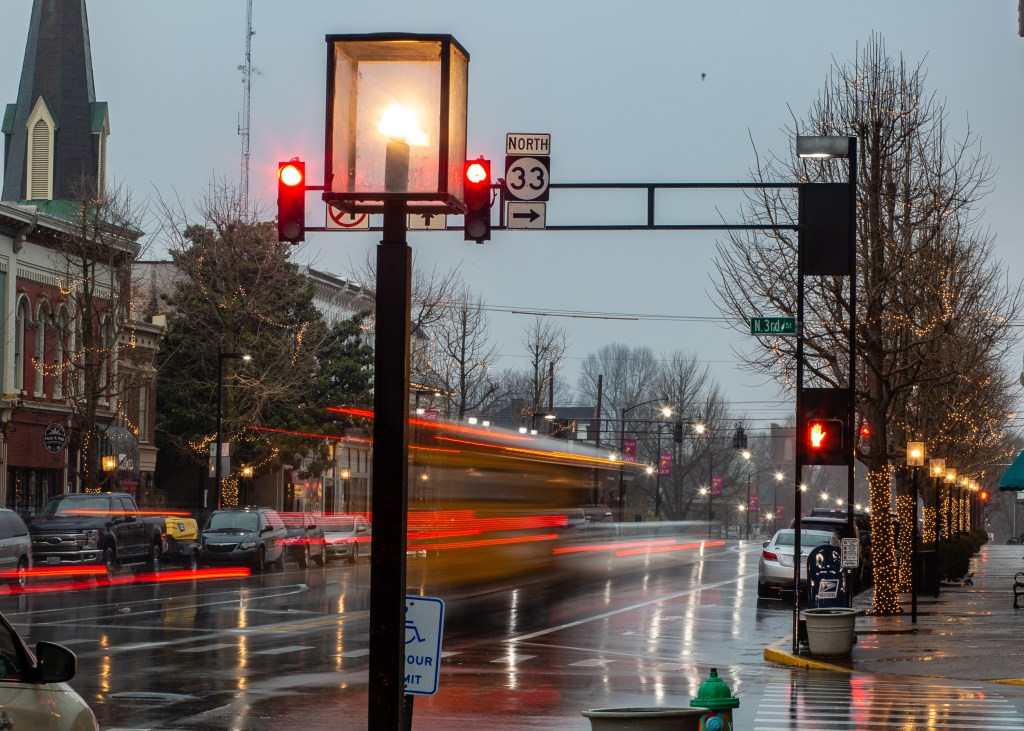 Tail lights of vehicles passing through the intersection at Third and Main streets in Danville Monday afternoon leave streaks on an extended exposure photo. (Photo by Ben Kleppinger)

Danville City Commission approved a plan Friday to speed along progress toward a “streetscape” project for Main Street between Second and Fourth streets.

Municipal Utilities Engineer Earl Coffey said there’s usually an 18- to 36-month process for a streetscape project like the one Danville hopes to complete for the stretch of Main Street in question, which has been criticized by many for poor light and safety features.

Coffey said instead of waiting for approval, the city could take the matching funds it has already set aside in order to qualify for a grant and spend them on the “design” phase for the project.

Doing so would mean whenever the city is awarded a grant to complete the project, it would already have construction plans in hand and be ready to start work right away, Coffey explained.

Completing the design phase could take about six months, Coffey told commissioners. First, the city will have to put out a request for proposals from design firms. Then, the commission could hopefully review those firms interested in January and select a firm in late January or early February. The chosen firm would then develop in-depth construction documents that go well beyond the current conceptual plans the city has, detailing things like drainage and utilities.

“It ultimately reduces the time to implement the project,” he said. “I think it’s become apparent that we need to take some action to that end … this begins the process immediately.”

Calls for safety improvements downtown have peaked in recent weeks, following an Oct. 25 vehicle vs. pedestrian collision at the intersection of Main and Third that killed one pedestrian.

The city commission voted unanimously to approve of staff spending the budgeted streetscape funds on the design phase of the project.

Coffey also updated commissioners that staff planned to meet this week with Lori Finke, a concerned resident and professional lighting expert who spoke in favor of many possible improvements at the last regular city commission meeting.

And City Manager Ron Scott said the city is cleaning all the lenses and replacing all light bulbs with LED bulbs in order to improve safety. Commissioner J.H. Atkins said he hasn’t seen the improvement in lighting downtown yet that he would expect if all the lights have been changed out; Coffey said “staff is proceeding” with improvements and “trying to make interim changes.”

Also at Friday’s meeting, Mayor Mike Perros said he and Boyle County Judge-Executive Howard Hunt are planning together on how to approach “the highest levels of state government” to push for Danville to get funding “as soon as possible” for the full streetscape project.