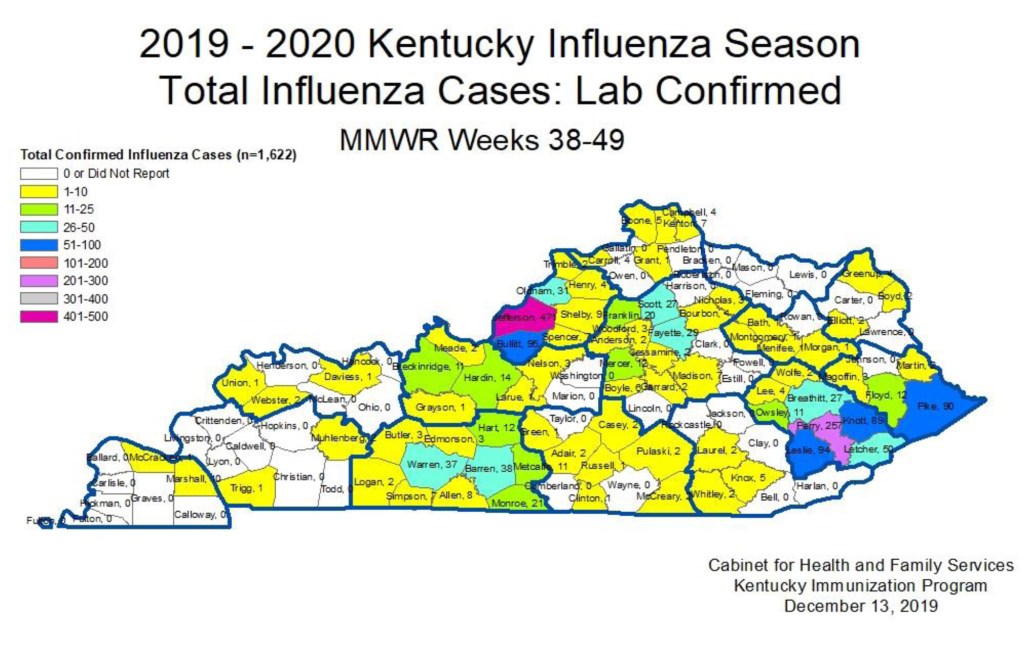 Four flu-related deaths of the 2019-2020 flu season have been reported and flu activity has been raised to “widespread” with flu cases or flu outbreaks in all of the Commonwealth’s 17 regions reporting flu-like cases, according to officials with the Department for Public Health (DPH), within the Cabinet for Health and Family Services (CHFS).

In Boyle County, five confirmed cases of the flu were reported between Dec. 1-7. During the same time span, Casey had one case; Garrard reported two cases; Lincoln had zero; and Mercer reported seven.

Boyle County Health Department Director Brent Blevins said, “It’s important to get the flu shot annually as this is one of the tools we have to help us avoid the flu.”

It’s not too late to get the vaccine because the flu season will continue up through the spring, Blevins said. It takes about two weeks for it to become effective, so it’s important to get the shot as soon as possible, he said.

You can get a flu shot at the health department, local pharmacies and at your physician’s office

Other important flu fighting and general healthy habits components are to wash your hands frequently and keep them away from your face, Blevins said. If you think you may have the flu, see your doctor, drink lots of healthy fluids, eat a healthy diet and exercise. Plus, avoid others who are sick when possible, he added.

According to a news release from the Kentucky Cabinet of Health and Family Services, in addition to the four deaths, DPH officials have reported 1,622 laboratory-confirmed flu cases in regions across the state since Aug. 4.

“We extend our condolences to the families who have suffered losses during this flu season,” said Dr. Angela Dearinger, Commissioner of DPH. “These personal losses are a reminder for all of us that flu can be a serious illness, for young and old alike, and we strongly encourage people to protect themselves by getting a flu vaccination. This is especially important for children and adults at high risk for complications related to the flu. Stay at home if you have the flu or flu-like symptoms and to avoid contact with others.”

Infection with the flu virus can cause fever, headache, cough, sore throat, runny nose, sneezing and body aches. Flu can be very contagious.

The Centers for Disease Control and Prevention (CDC) Advisory Committee on Immunization Practices (ACIP) recommends flu vaccine for all individuals six months of age and older. People who are strongly encouraged to receive the flu vaccine because they may be at higher risk for complications or negative consequences include:

The flu vaccine has been changed to better protect against the types of flu that were seen last season. Both the CDC and manufacturers of the flu vaccine report that there are no shortages of vaccine. Vaccination can be given any time during the flu season, but providers are encouraged to administer the vaccine as soon as possible. Medicaid, Medicare and most private health insurance providers cover flu vaccination as a preventive service.

The flu vaccine is especially important in light of the longest flu season the nation experienced last year. The CDC reports that more than 647,000 flu-related hospitalizations occurred and more than 61,000 people died as a result of the flu. In Kentucky, there were 196 flu-related deaths, two of which were children.

It is especially important for pregnant women to be vaccinated before or during pregnancy. Antibodies cross the placenta and provide immunity to infants up to 6 months of age, when the infant is eligible to receive their first annual dose of flu vaccine. Last season in Kentucky, there were infants less than one month old that had the flu.

“Getting the flu can be debilitating and sometimes life-threatening,” added Dearinger. “Vaccination is the best tool we have to prevent the flu. It is also extremely important to take simple preventive steps to avoid the flu and other illnesses that tend to circulate at this time of year – wash your hands frequently, cover your mouth when you cough or sneeze and stay home when you are sick.”