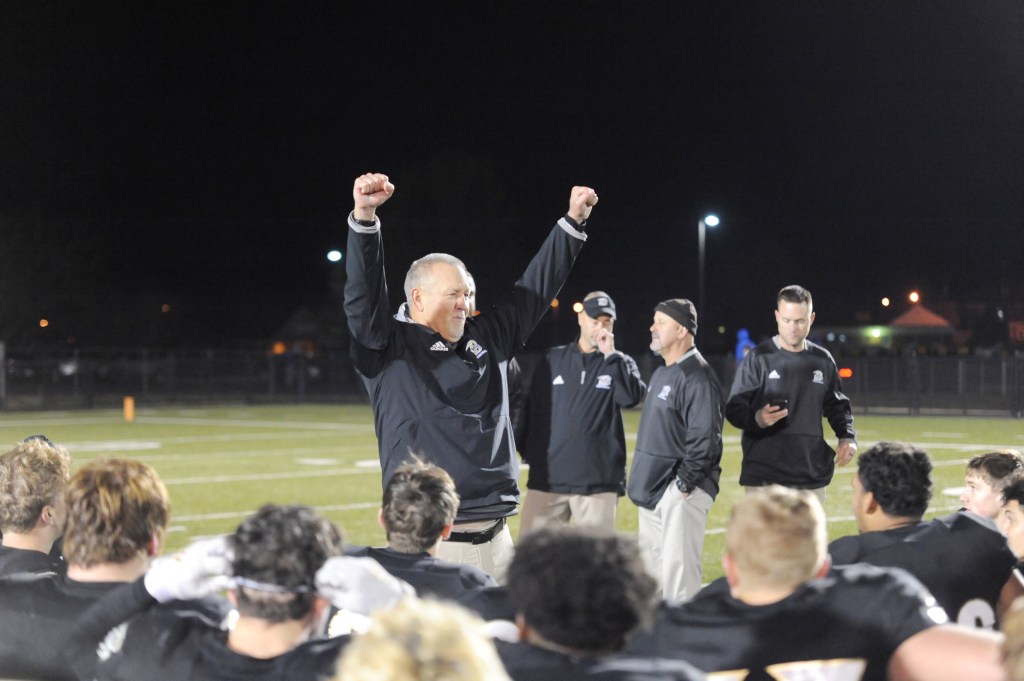 Boyle County’s legendary head football coach Chuck Smith told his team and the school Tuesday morning that he would be retiring from coaching football.

In his two stints as head coach, Smith led the Rebels to six state championships, including a run from 1999-2003 where they won five straight. During this season, Smith won his 200th game at Boyle in style — a 59-0 win over crosstown rival Danville.

Smith closes out his time on Boyle’s sideline after leading the school to his second state runner-up finish.

“There is nothing like Friday night football at Boyle County High School,” Smith said in his retirement letter. “However, it is time that I take a step back and dedicate time to my wife, children and grandchildren whom have selflessly sacrificed so that I could live my dream. Their selflessness is the core of what football teaches and I am forever grateful and appreciative for them in my life and I look forward to spending more time with them.”

Smith took the reigns of a Boyle team that won a combined five games in the three seasons before he arrived. In his first year, he won seven and made it to the Class 2A playoffs. His next year, the team went 2-8 and it was his only losing season in his 19 years on the Boyle sideline.

In 1996, he led the Rebels to an 11-3 season and a finish in the semifinals. Three years later, he’d hoist his first state title to cap off a 15-0 season. The Rebels wouldn’t lose a game for two more years, and would win bring home the next four titles, and finish as the runners up of the 2004 title game. He was the first coach in Kentucky high school football history to win five straight KHSAA titles.

After his first stint at Boyle, Smith left to take a role as the linebackers coach at the University of Kentucky before returning to the Rebels in 2014.

Smith’s coaching staff at Boyle was made up of former head coaches, former players and a former NFL lineman in Travis Leffew — who fits into both of the other categories.

“It has been a privilege and honor to work with the many great assistant coaches that have sacrificed their time and energy for the success of this program and the development of many great athletes that have participated in our football program,” Smith said. “The success of Boyle County football is a direct reflection of the countless hours and dedication these assistant coaches and support staff have committed and for that I am forever grateful.”

Smith leaves behind an enormous legacy at Boyle County high school. In addition to the six state championships, he has coached two former NFL players in Leffew and Jacob Tamme, and has helped several others play football at the next level. On Wednesday, Dec. 18, three seniors from what is now Smith’s last Boyle team will sign letters of intent to play at Division-I programs. Reese Smith will be signing with West Virginia (where he’ll play under Neal Brown, another former Smith player), Landen Bartleson will sign with Notre Dame and Wilson Kelly will be signing with Middle Tennessee State.

In addition to the great coaching legacy, Smith’s son, Brandon (who played under his dad at Boyle), is a successful head coach in his own right at South Warren and has won two state titles in his six years at the helm.

The shadow left behind by Smith will be an immense one, but he has set the football program up well with a loaded coaching staff and a tradition that makes it one of the most attractive coaching vacancies in the state.

But it cannot be understated how much Smith meant to the program, the school and the community.

“He has been a huge asset to our school and community and we wish him well on his retirement,” Boyle County athletic director Kyle Wynn said.