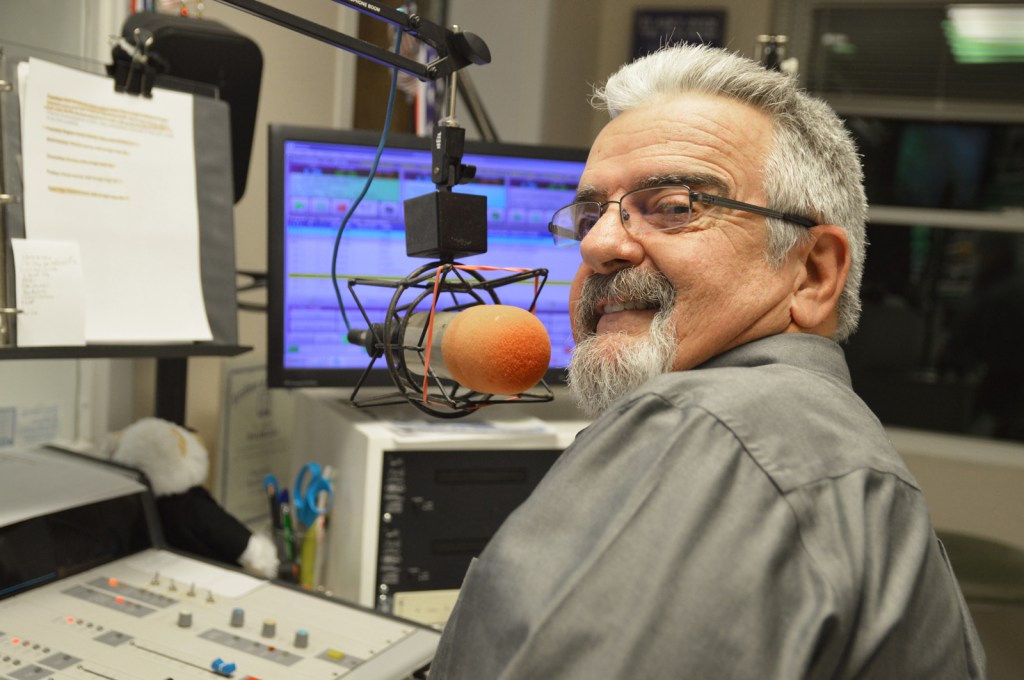 It’s dark at 6 a.m. on a December morning in Danville. But it’s even darker when Charlie Perry gets to Hometown Radio Network on Shakertown Road; he comes in at 4 every weekday. 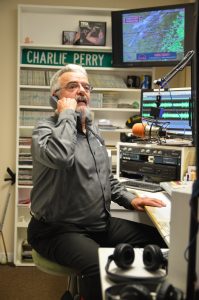 Charlie Perry takes a phone call while watching his monitors.

The local legend, known as the “Duke of Danville,” will retire from being on the air at WHIR by the end of this month. And even though he’s excited — for more time with the wife and grandkids, to travel … — it’s easy to tell there’s some trepidation about his big life move. After all, he’s worked for the station since 1988, and for another station before that; he has a good 40 years of radio experience behind him.

He’s always been a radio guy, he says, after a stint in the restaurant business.

“My favorite part? All the people I get to deal with, people who have become my friends,” Perry says, headphones around his neck, standing in front of a mic in the booth. He’s smartly dressed with a pressed, grey button-down tucked inside of dress pants cinched with an ornamental silver belt buckle, and brightly colored socks inside of leather loafers.

And it’s always interesting for him to learn just how many friends he does have, ones he doesn’t even know. People will walk up to him in line at the store and just start talking, as if they’ve known him for years. But they feel as though they have — they listen to his deep, smooth voice every morning, giving them the weather report, popping in some interesting trivia now and then or having different “characters” phone in for comedic interviews.

Several listeners will call him while he’s on air; a few did Tuesday morning, describing emotionally how much they will miss him, how waking up will be different now that he’s leaving. And there are the callers who just want to talk about national politics, which Perry tries hard to stay away from.

He manages the sound board while he’s on air, adjusting it somewhat for each situation. Perry says he’s really not a technologically-advanced person, but he’s learned a bit over the years; however, he tries not to let too many people at work know just how tech savvy he is.

“I say, ‘oh, it’s fixed? I don’t know how that happened,’” he jokes, about past times he’s figured out some issues and rectified them.

Two large monitors keep him in the loop on what’s coming up next and for how long, while Facebook stays on his center screen to keep him connected, and a TV above him shows the Doppler radar weather forecast. 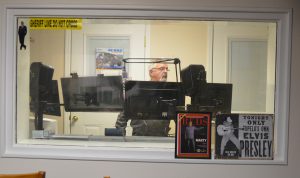 “Here, I’ll put the ‘morning face’ on,” Perry says, as a picture is snapped of him, grimacing. But it’s pretend, he says — like most of radio, and laughs; he’s usually sporting a wide grin across his face and is known for it, which comes through in his voice.

Now that he and wife Vickie have six grandkids, three of them out of state, it’s high time for some leisurely travel, and to do what he wants to do when he wants to do it. But he loves Danville; he’s had opportunities to move, take jobs elsewhere and hasn’t been interested so far.

“I’ve got one now to leave Danville, after I retire, if I want to,” he says, but can’t say whether it’s in radio or not. He could do some consulting; there are a couple of things he could consider later out there, he says. Sounds like he’s not planning on sitting still for long.

Perry, 70, says the retirement idea has been in the works for about a year. He stops mid-sentence, puts his headphones back on and goes straight to a promo. A lot of his on-air banter is impromptu; he’s a natural with formulating quick, catchy phrases and accenting certain words with unique enunciations in a way that buzz the eardrum, pulling listeners more closely in.

Perry says sure, he has his bad days; days where he may be a bit off kilter, maybe feeling negative about something. “I’ve had tragedies, I’ve had hurts … There are days that way …” however, he says in his business, he really can’t share his feelings in a negative way.

But that’s not about saving face; it’s about the responsibility he feels to his listeners.

“You really never know where someone may be when they’re tuning in. They may be sitting on the dock of the bay … and who knows what you can do to help them get through something, but you can try.”

Perry thinks a lot about the way he impacts listeners. “I do, I do. And I think about the way they impact me, too …” He works on air as if he’s having a conversation with one person; his style is to be very personable, and he prefers “not to sound like I’m giving a speech.”

He’s not only a self-professed people-person, but a total sucker for his grandkids. On the Tuesday morning show, Perry played a song one of his granddaughters recorded for him last weekend when she visited the studio. She gives an intro before it begins, thanking her “Pappy” for his encouragement. He listens, stares down for a while as the song goes through, looking up now and then with a sparkle in his eyes before he wipes them with a tissue.

“Gets me every time,” Perry says. He dries his eyes once more, then turns back to the mic, presses a button and carries through with his incredibly upbeat voice.

Hometown Radio will have an open house 10 a.m.-1 p.m. Friday, Dec. 20 at 2063 Shakertown Road in Danville, to wish Charlie Perry a happy retirement.