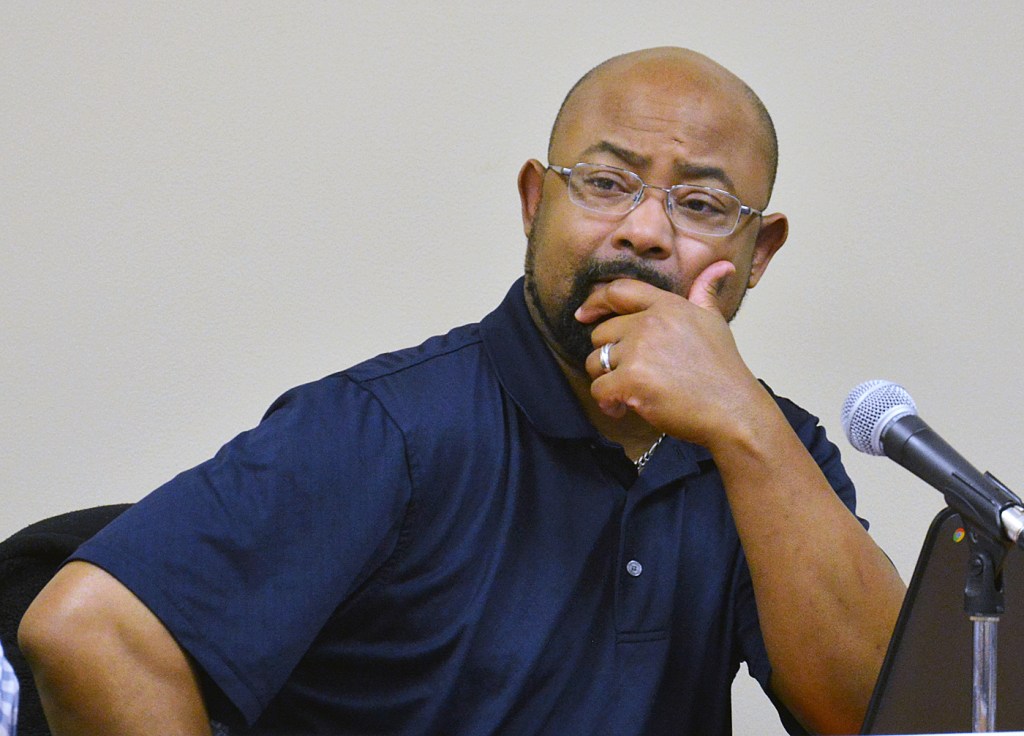 Danville School Board member Troy McCowan listens to a presentation by school superintendent Dr. Tammy McDonald as she talks about how the district could save money. (Photo by Robin Hart)

The Danville School Board may need to decrease its spending next year to 3% less than what it receives in 2020 tax revenue, in order to replenish its dwindling general fund and meet state requirements. 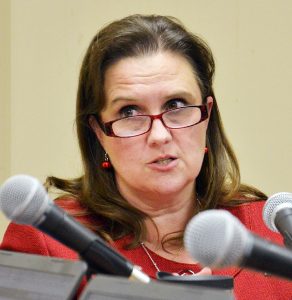 Danville Schools Superintendent Dr. Tammy McDonald talks to the board about possible budget cuts for the next school year. (Photo by Robin Hart)

During a budget discussion for fiscal year 2021 at Monday night’s regular board meeting, McDonald said she had a CPA do an audit last month, in addition to a state-mandated one, looking into the district’s general fund for the past three years. Board members had been questioning her why the general fund had been shrinking for the past few years, McDonald said.

McDonald and Teresa Osbourn, director of finance and human resources, found that four of the past five years, the board had spent more than what the previous year’s tax revenues had brought in.

McDonald said their research showed that the board had not been given the previous year’s tax revenue amounts when they were making budget decisions.

“In the board’s defense, as I really dug deep and looked, I’m not necessarily seeing that comparison to the year before,” she said. 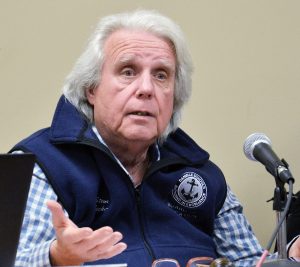 On Tuesday, Board Chair Steve Becker said the board made budget decisions for the past few years based on the previous financial officer and superintendent’s recommendations.

“It was a leap of faith,” Becker said. “That piece (previous revenues) was missing. Looking back, that was a pretty vital piece of information.”

After hearing the auditor’s draft report, McDonald said she asked him, “For us to be healthy and move our reserves back to where it needs to be, what do you suggest, what should our budget look like?” His answer was to save $1.1 to $1.5 million over the next three years, McDonald told the board.

“My recommendation as superintendent is to make some cuts in our budget this year,” she said.

She said the auditor also suggested that the top things to think about where to cut included payroll, substitute teacher pay, sports and maintenance and facilities.

Following an in depth presentation comparing several areas of spending to other comparable school districts and Kentucky Department of Education recommendations, McDonald outlined what she thought could be options for budget reductions and possible savings for the school district. These included:

“I’m not saying that’s what the district needs to do,” McDonald said. “But I’m just quoting from what the auditor found.”

McDonald showed the council a slide of where reductions and possible savings could occur, which included: 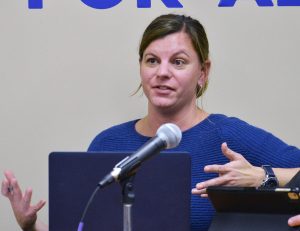 Danville School Board member Lori Finke tells the board that reducing the 2021 budget by 3% is “doable.” (Photo by Robin Hart)

Board member Lori Finke said a 3% reduction in spending “is doable. I don’t want this to go to the taxpayer. … This is not a fun discussion … but having all the information makes me so much more comfortable.”

Becker said, “If we can accomplish three-quarters of these cuts, then we’re obligated to do that. …. Some parts of it I don’t agree with, but this is discussion at this point.”

He added, “It’s going to be a healthy process. It’s not going to be pleasant all the time, but it will be for the betterment of the school district.”

The school board will meet in January to approve a draft budget for the next school year. A tentative budget will be set in May and a working budget will be decided on in September.