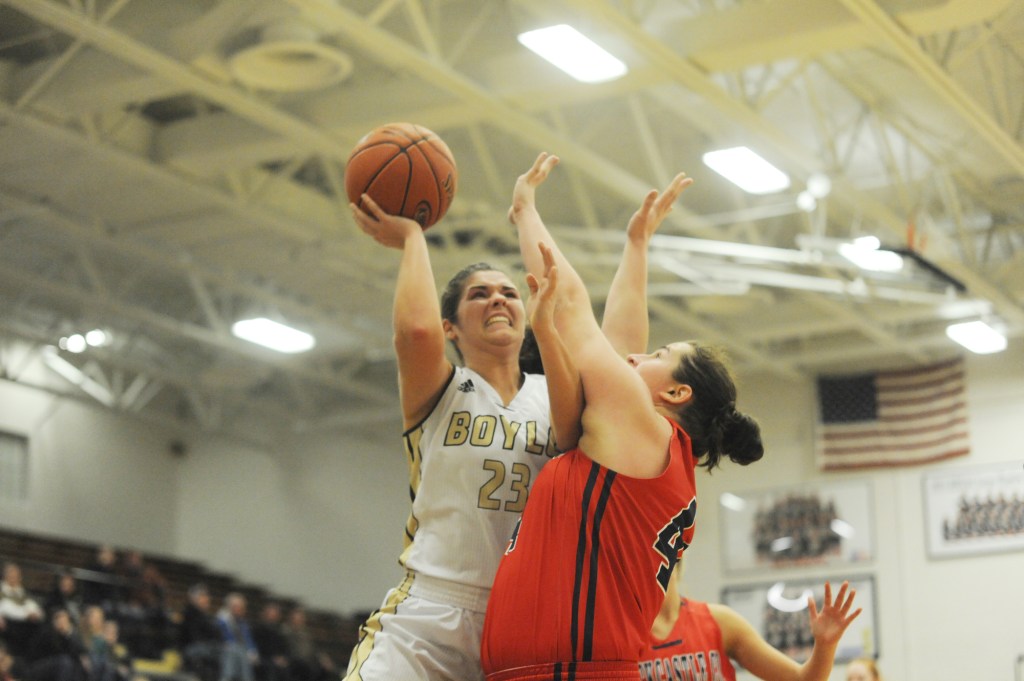 Keely Bowling fights through a Rockcastle defender for a layup. (Photo Derek Brightwell)

In his first year as head coach of the Boyle County girls basketball team, Ryan Wiersma isn’t as concerned about the wins and losses early in the season as he is about how his team grows and learns his system.

“The biggest thing is willingness to change. They all know where we want to go as a program and where we want to improve,” he said after the Rebels lost to Rockcastle County 68-46 Tuesday night. “They’re taking steps in the right direction every single day. We’re growing as a team. We’re learning what we need to know on our scouting reports and how we need defend certain teams. It’s just process at this point in the year.”

Early on this year, the Rebels have alternated wins and losses through five games to get to a 2-3 record. All of those losses have come against tough opponents in Casey County, Campbellsville and Rockcastle who’ve combined for a 16-3 record. Casey’s only losses have come against two out of state teams — a basketball academy from Australia by four points and a private school from West Virginia by two — and Campbellsville’s only loss was at Danville.

“They’re the standard right now. Casey County was one win away from a region championship last year and Rockcastle’s right there with them,” Wiersma said about his tough early season opponents. “That’s a good program. Coach (Chrysti) Noble’s a great coach. We’re learning just as much from ourselves as we our from the other teams and how they play.”

About Tuesday’s loss, Wiersma was encouraged by what he saw, despite the outcome.

“We competed for most of the game and that’s been our biggest thing. Just trying to grow as a team every single game,” he said. “Obviously, Rockcastle is a very good team. They’re undefeated on the year. They’ve got a lot of talent and a lot of size. They can finish some plays that we didn’t.”

One player who embodied that competitiveness throughout the game was Emily Glasscock — who scored half of her 12 points in the final quarter.

“Emily is coming off an injury from the last game and she battled every play. She’s just a warrior. She brings it every single day,” Wiersma said. “We ask a lot of her — she plays all five positions on the court. It’s not surprising that she didn’t give up. Those shots are going to keep falling for her.”

The Rebels leading scorer was Peyton Bugg, who finished with 15. The freshman is one of the starters who runs the offense, and Wiersma said that they’ll get better as she improves and feels more comfortable in her role in the system

“With Peyton — the evolution of her is when to attack for herself and when to create for others,” he said. “She’s learning that. We’re teaching the game a little bit different. She’s got a lot of people trying to help her — just little tidbits of the game — and she’s been very receptive. She’s grown a lot just in the last five games.”

They get a short, two day rest before playing in back-to-back tournaments over Christmas break for six games in nine days. That means limited time to practice, and an increased importance on pre-game preparation.

“Playing six games, we got I think two more practices. We’ve got to learn while we watch film and while we walk through,” Wiersma said.. It’s a little bit different than just getting on the court and practicing. Our team has done a great job of watching film and digesting it and seeing how to implement it in the game.”

But, despite not being where they want to be right now, Wiersma is confident it’ll come together as the season goes on.

“We’re not going to give up on any game. We’re getting better and getting closer every single game.”