Shorthanded Rebels get win over Rockcastle 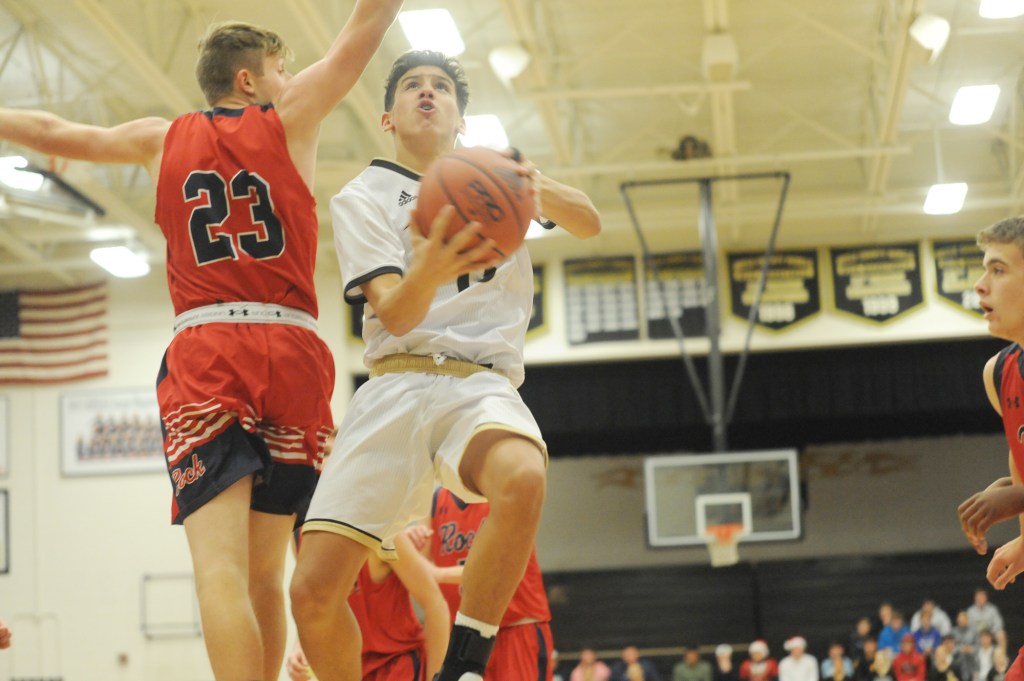 That was the first thing coach Dennie Webb said after his Boyle County team — down two starters with an illness — survived a late game surge by Rockcastle County to win 61-52.

Without starters Grant Hotchkiss and Luke Sheperson who were home battling an illness going around the school, Webb had to get a lot of players more minutes than they were used to. One of those was freshman Tommy Ziesmer who got the start tonight.

While Ziesmer only had two points, he pulled down five rebounds and had two big blocked shots. Most importantly, he played over 22 minutes.

“We played some kids that hadn’t been getting a lot of minutes these last few games,” Webb said. “Tommy Ziesmer played a lot tonight and prior to tonight he hadn’t gotten a lot of minutes. That’ll be a positive that — once we get everybody back — hopefully we can build on that as well.”

Positives weren’t something Webb was quick to find in Tuesday’s performance, but was still happy to get the win. Three players were in double digits — Luke Imfel led the team with 17, Owen Barnes had 14 and Hagen Webb had 11 — but the team shot 42 percent from the field, 13 percent from three and 48 percent from the free throw line.

“We did some things that we haven’t been doing. We didn’t shoot the ball well, defensively we broke down some,” the first year coach said. “Our energy wasn’t there. I don’t know what the cause of that — maybe a little bit of illness going around — but if you’re out here, you got to play. If you wanna play, you gotta play. It was a W. We’ll take it but we got things we got to do better.

“We can’t let it linger and keep doing these things,” he added. “Defensively, we’re going to get better. We weren’t communicating. We were giving up stuff that we haven’t given up in a few games. That little bit of grit and fight wasn’t there at times. I don’t know what it was, but there was something we just weren’t there. It was a little disappointing in that regard.”

One thing that has hampered the Rebels (3-1) in their first four games is not being at full strength. In the season opener, key players — including Sheperson and Ziesmer — had to finish out the football season before joining the team. They got two games from them and then got hit with an illness.

“You kind of thought when we played Somerset we’d just gotten the football players back. Then Friday night kind of felt like we’d gotten things rolling and — having everybody back — we’d started to get some continuity,” Webb said. “We’re back to trying to get people into positions and playing positions that they’re not used to playing. It’ll make us better in the long run, but it’s just frustrating as a coach not being able to get any continuity from one thing to the next.”

The Rebels have been helped by a relatively light schedule over the first three weeks of the season, something that Webb said was intentional to help integrate the football players back into the system. However, that schedule starts to ramp up with three games in four days, starting with Tuesday night’s win. On Thursday, Boyle welcomes East Jessamine before traveling to Lexington Christian on Friday night.

“Tomorrow it’ll just be a little bit of us. Break down some of the things we saw tonight. Getting ready for East Jessamine, we’ll watch a little bit of film. We can’t kill them,” Webb said. “So just try to clean things up and get ready for Thursday. Then we got another game Friday. Short turnaround — we get one practice and two games coming. There’s a lot we got to do.”