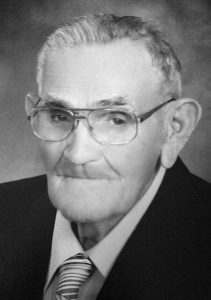 Tom owned a small trucking business and hauled agricultural lime, crushed stone and asphalt while living on the farm. On retirement he became a full time farmer and continued until being kicked by a cow and breaking his hip one month prior to his 100th birthday. He continued to live, with assistance, on the farm until his death. He was an avid storyteller, and his embellishments grew with age. He was a lifetime member of the Mount Olive Christian Church.

He was preceded in death by his parents and his wife Clytha E. (Salyers) Godbey and five siblings and their spouses, Irene (Chester)Eoff, William (Beulah)Godbey, Anna(Lelus) Sims, John (Betty) Godbey,andJeff Godbey; plus two children: Lemetta Dause and Luther C and his wife Theresa Godbey and one granddaughter, Kelly Evatt.