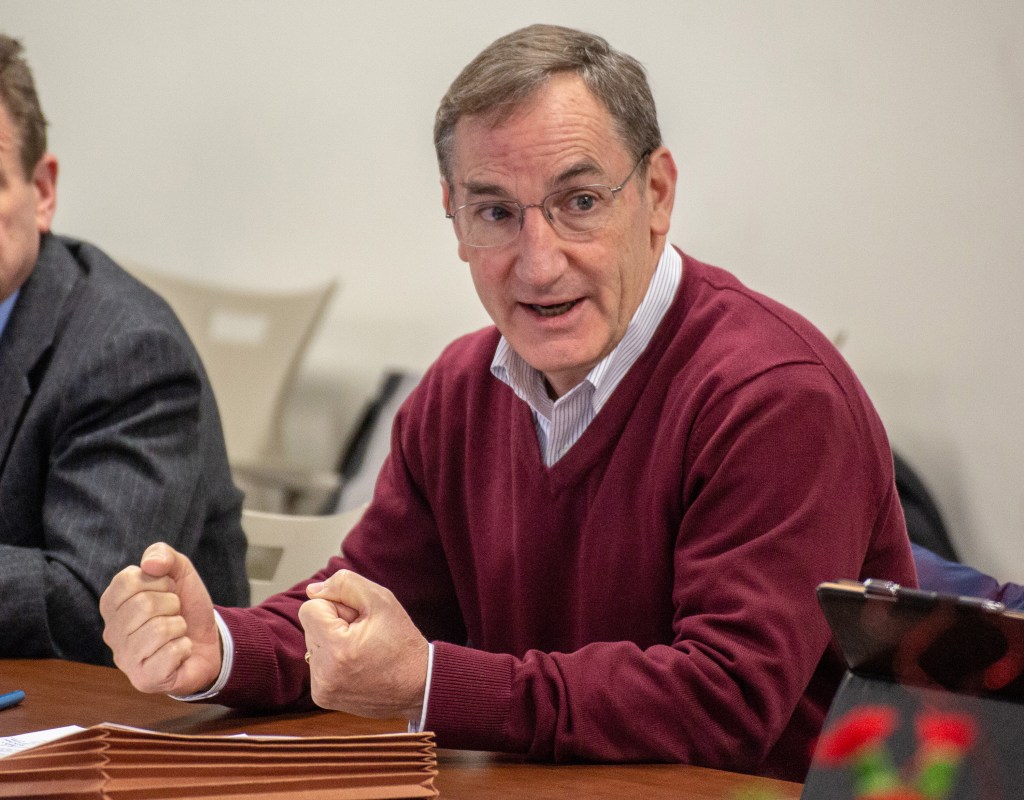 Alan Turbyfill presents findings and recommendations from a task force on buying and developing additional industrial land in Boyle County during a meeting of the Danville-Boyle County Economic Development Partnership board Wednesday morning. (Photo by Ben Kleppinger)

Boyle County “urgently needs more land” for industry, according to a report assembled by a local economic development task force.

The report was presented publicly Wednesday morning to the Danville-Boyle County Economic Development Partnership board. It contains nine findings and four recommendations in support of local governments buying and developing land for industrial use, with a strong chance that the developed land could be given away to a future industrial developer locating in Boyle County.

“We think clearly, this is an issue that needs to be addressed,” said Alan Turbyfill, the EDP treasurer and leader of the Asset Financing Task Force that put the report together. “We need more product to sell.”

“Recruiting companies is a process of selling a product (sites) — and we have very limited product to sell,” the report states. “A robust inventory of developed land is needed to be able to market a variety of products — various lot sizes and locations, pad ready sites and spec buildings. All the communities we met with have recognized the need for more land and are in the process of addressing that issue.”

The task force was created to look into the possibilities for developing a project-ready industrial site in Boyle County, after debate over a proposal to spend $50,000 on initial work to develop a property along the Norfolk Southern rail line that runs through Danville.

The property is owned by the railroad, and government officials have been adamant that they cannot legally spend public tax dollars to help develop privately owned property.

Every case is different

Turbyfill said Wednesday the task force found that methods of funding varied widely and were very case-specific in each community, but that in every case, it was local governments that acquired the land to be developed.

But acquiring the “raw land” is only a first step, he added — the cost to add infrastructure and develop the land so it’s ready for an industrial prospect to build on can be many times more expensive than the land itself. One of the industrial parks the task force toured cost $1.4 million for the land and $6.3 million for roads and utilities, he offered as an example.

Potential sources of funding for such a large-scale project include city and county general funds, private funds from industrial foundations, loans offered through rural electric cooperatives, state road access funds, grants and loans for utility expansion projects, community development block grants, Product Development Initiative funding from the state economic development cabinet and issuing bonds, among others, according to the report.

It’s also possible to fund or recoup some costs through land sales and the creation of special tax districts or additional tax revenues.

Development could require Danville and Boyle County “or possibly even other cities and counties” to invest, the report states. “In fact, it appears that having multiple entities involved increases the chance of approval for some funding programs and could improve terms for loans or bond issues.”

“We talk about the need for the regional approach from a marketing standpoint,” Turbyfill said. “But it’s also from a development and financing standpoint — it might be necessary.”

Boyle County’s limited land options might also make it necessary to partner with neighbors that have land available, he said.

The task force made four recommendations on how to proceed:

Turbyfill said Boyle County is a small county, and when you look at only the areas where infrastructure would allow development of industrial land, there’s “not a lot there.”

“I don’t know how it could not come from agriculture,” he said.

Miles said she would like to have someone on the proposed task force for identifying potential sites who would “lift that (concern) up in the conversation.”

EDP board Chair Marty Gibson said he thinks there is the potential to develop some pieces of land that are not intended for agricultural use long-term — such as land owned by LSC Communications along Lebanon Road and the undeveloped railroad property that started the whole discussion.

Danville City Commissioner Denise Terry and Danville Mayor Mike Perros both wondered whether pursuing commercial development instead of industrial could be preferable, given that commercial development requires far less investment of taxpayer funds. They were told the report was developed specifically with the idea of developing industrial land, but also that looking closer at that option could be good.

Later in the meeting, EDP President Jody Lassiter reported that Meggitt Aircraft Braking Systems would soon be asking for Boyle County and Danville to participate in an industrial revenue bond, which would finance construction of the 95,000-square-foot expansion being built at its industrial-park location.

One effect would be that Meggitt would pay a lower state property tax for a number of years, and no local property taxes for the same time period.

Lassiter said Meggitt is being asked to provide “payment in lieu of taxes” — or PILOT — to all of the local special taxing districts during the life of the bond. The PILOT would be equal to what Meggitt would have paid the special districts in property taxes; but the property tax exemption would still affect Danville and Boyle County governments.

Meggitt plans to hire 83 new people to work in its expansion; it has been approved to receive $1.4 million in tax incentives from state government for hiring those workers, and will receive local payroll tax refunds as well.

Perros said the heavy amount of incentives required to land big industrial projects may be a “good argument” for focusing on commercial development. Local governments continue to battle rising costs for providing basic services and state-mandated pension increases that are expected to rise every year for around a decade. Revenue increases for local government from industry projects may not be seen for seven to 10 years, he said.

“It may be that commercial winds up being the best investment, at least on the short term; it may be that industrial is the best on the long term. I don’t know; somebody is bound to have done that study,” Perros said. “I think we need to kind of look at that as part of smart growth … what’s our best use of our time and our resources?”