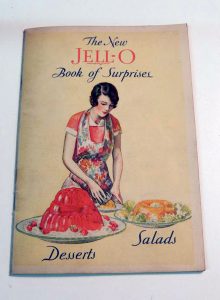 Question: Hi Jerry, Mom had tons of cookbooks when we moved her into the senior rooms. She

doesn’t want them and of course doesn’t cook anymore. I know that cook books like Thelma Linton have value, but what about these Jell-O pamphlets? I’ll bet there are 15 of them and all are in great condition. This is one that I just grabbed and photographed. Would these have any value or collectible merit? Or should I just toss them? Thanks.

Answer: Cookbooks are not the seller that they used to be, mainly because so many people get most of their recipes online. But still there are collectors of cookbooks.

Now, in the grand scheme of things, Thelma’s Treasures, though loved and used, is on the low end of the totem pole, in regards to value.

Some museum examples from the 17th and 18th centuries can bring thousands and thousands of dollars.

Trust me, you will not have these cookbooks. However, there are hundreds of cookbooks that are out there that can fetch hundreds and hundreds of dollars. Many of these are valuable because of their age, or location, or their themes, OR because of the illustrator. Many famous illustrators worked, in their salad days, illustrating for cookbook publishers. Norman Rockwell and Rose O’Neil are two that come quickly to mind.

Now about your Jell-O cook book. Jell-O has been an American institute since 1897. The first

available flavors were raspberry, orange, lemon and strawberry. With coffee flavor being introduced in 1918, in limited areas. It lasted only a short time and I, personally, am intrigued with it.

It was during this Art Deco and depression era that lime Jell-o was introduced to the market and its chocolate flavor was discontinued.

Your little pamphlet was likely a give-away in grocery stores. It’s a gorgeous slice of upper class dining and food from the 1930s. So, to be almost 90 years old, it’s in remarkably good condition. That’s a bonus, because condition in these cookbooks, like everything, is paramount.

I did some quick research online and found that this one pamphlet was selling for about $10. You won’t retire on it, but it’s not to be tossed away either. Depending on the illustrator and the condition, of course, most Jell-O books and pamphlets tend to be priced from $5 to $70.

Now, those cookbooks and pamphlets from the 1980s aren’t bringing that kind of money … yet. Thanks for a great question.

It’s official. After almost a year’s worth of back and forth over funding for and management of parks and recreation,... read more