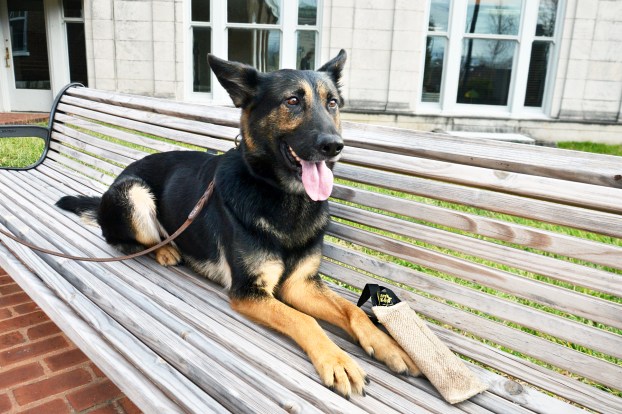 Aja sits with her favorite toy on a bench in front of the Boyle County Courthouse Thursday morning. (Photo by Robin Hart)

A Boyle County Sheriff’s Department narcotics detection dog and her handler recently placed second in a national certification seminar and competition in Florida.

Aja, a 4-year-old German Shepherd, and K9 Deputy Tanner Abbott have been partners for only about six months. Aja has been working with the Boyle Sheriff’s Office for several years in drug detection.

Abbott has been with the Sheriff’s Office locating illegal narcotics for several years, too, but recently was paired with Aja after he completed a dog handling class at Southern Coast K9 in New Smyrna Beach, Florida. 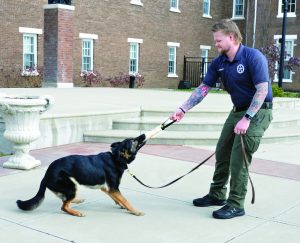 Every law enforcement dog team in the nation has to be certified by the National Narcotic Detector Dog Association. So, in November, the team traveled back to the Southern Coast K9 where they not only earned their national certification, they placed second out of all of the narcotics teams at that location. A total of 109 teams competed in drug and bomb indicating, Abbott said.

He also said that Boyle County Sheriff Derek Robbins and K9 Deputy Casey McCoy, who handles Nicki, have years of experience in working with law enforcement dogs and they have helped him a lot. 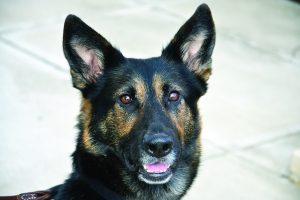 “Second place in a competition that has dogs from all over the United States is a fantastic accomplishment. Most of those teams are dedicated drug units, which means all they do is work narcotics,” Robbins said. “We don’t have that luxury. Our K9 guys are answering all radio calls — wrecks, domestics and taking reports. If we had the ability to dedicate our K9 units to narcotics only, we would be able to make an even greater impact on this epidemic.”

Robbins has attended this annual seminar for 16 years, he said. Several years ago he placed fourth, but the team of Aja and Abbott is the highest scoring team from Boyle County so far.

Abbott said he and Aja do much more than the required four hours of training per week. The more training they do, the better narcotics detection dog Aja will become. He said his goal is for her to win “Top Dog” at the recertification seminar.

Check out the next edition of Danville Living magazine to find out more about the training involved with Aja and Abbott, as well as more on the competition.

Editor’s note: This is the first of five stories chosen by The Advocate-Messenger’s staff as the most impactful of... read more