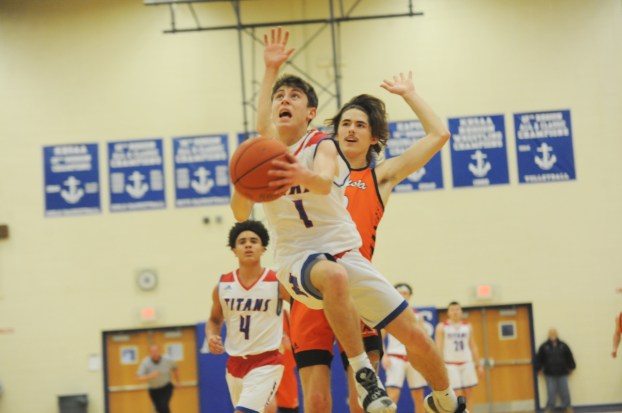 Titans fight to get win in Baird Classic

It wasn’t pretty, but Mercer County came back twice against Augusta to get a one point win, 57-56.

“Post Christmas is always tough. That’s not an excuse, it’s tough for a lot of people,” coach Josh Hamlin said. “But we were not ready tonight. We had a pretty good day yesterday but I just think for whatever reason our mindset was not there. Hats off to Augusta. We did not deserve to win that game. That’s what I told their coach afterwards. They outplayed us and that’s the cruel nature of sports — unfortunately there has to be a winner and a loser. We just happened to make a couple of plays in the fourth quarter.”

Mercer got key performances from its bench Friday night including Brayden Dunn who scored seven points on the night, five of which came in the final period.

“The kids off the bench did a great job. Brayden hit some big shots. Sam Baughman, Nate Dunning, Kobie Wessling played really good defense,” Hamlin said. “That was probably three of our better defenders tonight in the half court. I was really impressed with how they bought in, how they were talking, communicating. If you’re waiting on your stars every night to bail you out in order to get a win, sometimes it’s not going to happen.

“We always say ‘who’s going to be the guy tonight.’ And tonight that was Brayden. Tomorrow it might be somebody else. When you have more guys that are able to have those types of performances, it just helps you as the season progresses and the schedule gets harder.”

Dunning played a crucial role in the Titan’s first comeback of the night, in the second quarter.

After starting the game flat and trailing 14-9 at the first break, Mercer came back to take a 30-29 lead into the half. Part of that comeback was from Dunning who hit a crucial three and scored another bucket off his own missed shot.

But in the final seconds of the game, it was star senior Kaelin Drakeford with the ball in his hands. He hit two free throws late to make it a four point game, which proved crucial as Augusta hit a buzzer beating three pointer to close the gap to one.

“Kaelin looks at me while I’m drawing up the play in the huddle and says ‘coach, give me the ball. I want the free throws,’” Hamlin said. “He’s shooting 81 percent on the year coming into the game. He’s your senior, been a three year starter. So I said ok. Nobody blinked or said anything. He went three of four, and had that big time steal in the end. That’s what you want. You want your seniors to want the basketball. In a previous game, Micah Cheek looked at me and said ‘I’ll make it. I’ll make that three if you give it to me.’ Same thing we’ve had with Jamisen (Lewis) and Bryce (Yeast) and Trey (Price).”

Hamlin admits that Friday’s win was “ugly. It wasn’t pretty.” But can never complain about a win.

“I’d rather be ugly right now and be really pretty in February,” he said. “It all comes down in February to one game. Whoever you open your district tournament with is it. Yeah, it would’ve been nice right now to get a 20 or 25 point win. But pulling one out when you didn’t deserve one helps you a lot. In the past, we found a way to lose that game.”

Hamlin also hopes that his team will get some confidence from having to fight back to win a game.

“This is a really good group, a fun group to coach. I’m glad we’ve had the success, I just wish it’d be a little less dramatic,” he said, laughing. “I wish we could take care of business a little earlier. But again, the moral lessons you learn in a game like this are very important and we can use it as the season progresses.”

Tomorrow, Mercer plays a double header, opening with Middlesboro at 12:45 p.m. before taking on Spencer County at 6:00 p.m.

“Credit to our kids, they battled the whole night even though they weren’t playing well. And it’s great because we get two games tomorrow against two really good opponents,” Hamlin said. “If we don’t come out ready to play, we’ll get humbled. If we do, I like our chances. But always nice to squeak one out when you don’t deserve it.”

Make it seven in a row for Danville. After dropping a tough road game to West Jessamine early in December,... read more