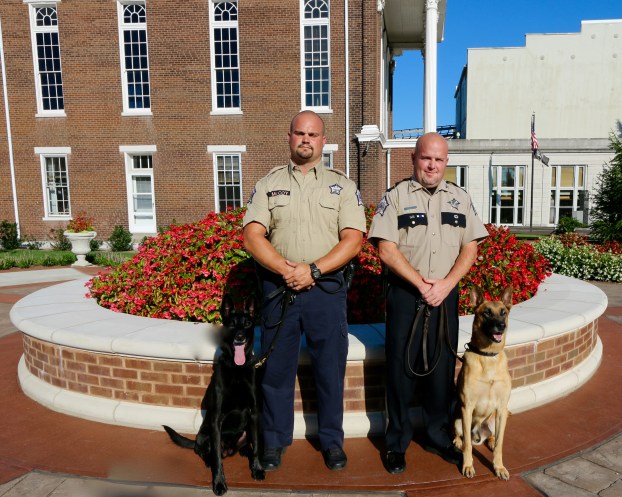 Initial reports indicate that at 2:45 p.m. on New Year’s Eve, Boyle County Sheriff’s Deputy Casey McCoy was making a left turn from the Danville Bypass onto Commerce Street in his department-issued Dodge Ram 1500, according to a Danville Police news release. While in the intersection McCoy was struck in the right side by a 2007 Dodge pickup traveling eastbound toward Stanford that was being driven by George Ellison, 21, of Waynesburg with his passenger, Olivia Holcomb, 21.

Assistant Police Chief Glenn Doan said McCoy was on duty, but was not answering a call at the time of the accident.

McCoy received stitches to his hand, and was released.

Niki was taken to the Animal Hospital of Danville, just across the highway from where the accident occurred, but later died due to her injuries from the crash, according to Boyle Sheriff Derek Robbins.

Danville Police are conducting the investigation and had an accident reconstructionist on scene Wednesday. Danville Police were assisted by Danville City Fire and Boyle County EMS.

Robbins said Niki was almost nine years old and had been McCoy’s partner for about seven years.

He and McCoy had gotten Niki from Southern Coast K9 in Florida. “She was head and shoulders above all the other dogs we tested,” Robbins said.

Niki was also as much of a pet as a police dog, he added. She was part of McCoy’s family. Losing Niki is not only hard on McCoy and the Sheriff’s Department, “it’s also hard on the family,” Robbins said.

He also understands what McCoy and his family are feeling about the loss of Niki. He had recently retired his dog Dejanco after about 10 years of working together. Two weeks ago, Dejanco was killed when he was hit by a vehicle.

Robbins said if McCoy later decides he wants another police dog, “I’ll get him another one.”

Editor’s note: This is the fifth of five stories chosen by The Advocate-Messenger’s staff as the most impactful of 2019.... read more