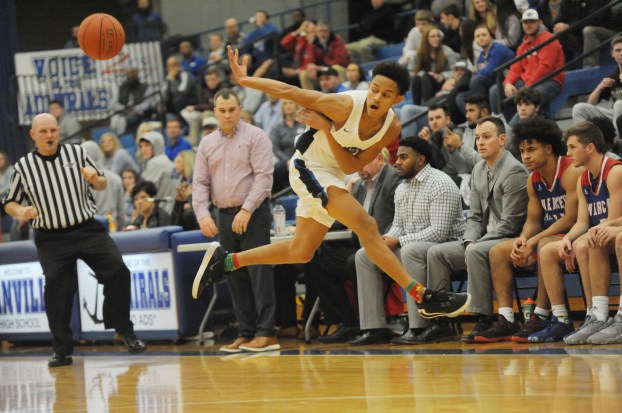 Trey Dawson jumps out of bounds to make a save against Mercer County. (Photo Derek Brightwell)

Danville atop the district in girls, boys basketball RPI

The newest RPI rankings are out from the KHSAA and Danville’s boys and girls both crack the top 25, and sit atop the 45th District.

The Ads are in the midst of a nine game winning streak, including wins over regional rivals Mercer County and Southwestern. During the stretch, Danville also topped the defending Ohio state champion, Harvest Prep, but out of state teams are all weighed as an average opponent by the ranking system.

Danville coach Ed McKinney knows that he can’t put too much stock in the rankings, especially this early in the season, but still admits that being in the top 20 is “fun to look at”.

Lincoln County started the year off hot, winning six straight. Since then, however, the Patriots have dropped three of their last four to fall to 7-3 and to 27 in the RPI.

In the girls ranking, the 12th Region is well represented in the top 40, with six teams representing the region, more than any other region in the state.

Southwestern currently sits atop the 12th, and fifth overall in the state. After Mercer and Danville the region is represented by Casey County (32), Pulaski County (34) and Rockcastle County (38).

Casey County (9-4) might be hurt more than any team in the state by the weight the RPI formula gives to out of state opponents. The Rebels have played six out of state teams already this season, with a seventh coming up on Saturday. Casey has not played a Kentucky high school since its meeting at Sacred Heart on Dec. 23.

The boys 12th Region also has a state-best six teams cracking the top 40.

In addition to Danville and Lincoln County, Pulaski ranks in at 24, Somerset 33, East Jessamine is 34 and Boyle County ranks 37.

The Rebels have had difficulty finding consistency this year, both in the results — after starting the season winning two straight, they have alternated wins and losses — and in who is playing for them. After getting the football players back for the season, a rash of illness and injuries have prevented Dennie Webb from having his full roster available to him in his first season.

Despite the lack of impact rankings have on the actual games, one thing can be gleaned from the first RPI rankings of 2020 — the 12th Region is going to be a tough one to get through for both the boys and girls teams.

Ask Danville coach Judie Mason what went wrong for the Ads in their 49-46 loss to Southwestern (12-1) and she’ll... read more